A Lesson in All Hallow’s Reading–Part 2

Halloween is fast approaching, and a favorite author of mine, Mr. Neil Gaiman, has proposed a new tradition. All Hallow’s Read.

Inspired, I wrote a short story for my kids and am sharing it with you too.
Happy Halloween!

The elementary school was near to the middle school, so the 6th graders simply walked the short distance. Katie scuffed along the leaf covered sidewalk with Lily and Carin, listening to them discuss their books. Sweet, girly Lily had a book of strange poems, something about a kid who swallowed a bunny that got caught in his throat, and another poem about a guy who lost his ears in a shears accident. Tomboy Carin had ended up with some overly cute tale about a cartoon pony lost in a pumpkin patch. Both desperately wished that they could trade for the other’s book, but as they were in different Language Arts classes, and they’d already completed their predictions work, it was too late to swap. Carin turned to ask Katie about her book, but by this time, they’d arrived at the other school and, after a short briefing, they were split up and sent to different kindergarten classes.

Katie walked into the Kg4 room and looked around. Handprint paintings of turkeys, tissue paper ghosts, and cut-out crayon-colored witches with long stripy legs dangled from the ceiling. While her classmates ooh’ed and ah’ed at the adorableness of it all, Katie bitterly reflected that the holiday brain-washing surely started at a very young age. She looked around for the kid that she was assigned. Jaxon. Jaxon Smith. Each child had his or her name on a name-tag taped to their desk, and she finally found her boy. A small, very slim, boy with dark, messy hair, wearing a stained shirt with a cartoon puppy on the front, sat hunched at a table in the corner. Here we go, Katie thought to herself. She pasted a smile on, and wandered across the room.

Not having younger siblings, Katie wasn’t quite sure how to talk to the little boy. She led with a safe “Hi!” and told him her name. He responded by looking up at her quietly. Fortunately, Katie remembered the paper that the teacher had handed her when they arrived, and she glanced down at it as if she knew what she was doing. She read: “After you meet your assigned student, go to the reading area, find a spot on the carpet, and read your book together.”

“Ok Jaxon.” She said brightly, “Do you like books? Shall we go read together?” He thought a moment, then nodded his head, and without a word, stood up. Not knowing what else to do, she held out her hand. Jaxon took her hand in his and surprisingly, took charge and led her to a cozy spot next to the window on the carpet. Other partners were already sitting and reading, while some were still introducing themselves. A few had been led by their little buddies to explore the classroom, the small children eager to show off their favorite work stations or works of art. Katie and Jaxon sat down, side by side, leaning comfortably against the wall.

She pulled her book out of the bag, and showed it to Jaxon. “See! We have a Halloween book to read! Your teacher told you that we’d be reading about Halloween, right?” Jaxon nodded again, and although Katie was beginning to wonder if the boy could even talk, she continued. “We have this book about wolves. See? It’s called “The Wolves in the Walls”. Do you like wolves? You have a doggy on your shirt. Are dogs your favorite?”

He looked up at her, his dark eyes big, and whispered “I’m scared of dogs. This is Adam’s shirt.”

Katie paused, startled, and asked, “Who is Adam?”

Jaxon, in that same small voice, said “Adam is my big brother. I don’t like dogs. Dogs jump out, and bark loud, and bite.”

Not sure how to proceed, Katie slowly open her book. She felt that the little boy had reached out to her and entrusted her with an important matter, his fear of dogs… and here she was with a book about dogs, the most scary BIG monster dogs you can find, wolves! The hand-out from the teacher did NOT cover this scenario. She thought for a moment, remembering her promise to her mother and her teacher, but finally decided that she could not be the one to bring nightmares to this small boy. Scaring the kid would not inspire him to read, and in fact, might accomplish the exact opposite. As the teachers from both of their classes were only wandering about, chatting with each other, and did not seem to be listening too closely to the stories being read, Katie easily made the decision to fake it. It wasn’t like the kid had to do a book report or anything, he just had to scribble-scrabble some paint on a poster paper and all would be fine, right?

She opened the book to a tame looking page, and whispered back to Jaxon. “I don’t like scary dogs either, or scary stories, or even Halloween.” He looked up at her in surprise. She continued in a whisper, “How about we pretend to read the book together, and then we can draw a picture about a dog? I think this is a story about a girl who saves her little brother from wolves. That’s what we can tell the teachers about the story. Can you do that?”
“Really!?” he said, “we don’t have to read the scary book?!”

“Ok!” he grinned, “I really do not like scary dogs or scary stories!” And with that, the two of them sat back and spent the next 15 minutes or so, whispering together behind the open book. Katie kept an eye on the roving teachers, and pretended to read when she thought it necessary. Jaxon told Katie about his big wheel bike and his teddy bear and his wooden train set. He told her that he loved Disney Cars and also kittens and big cats, but mostly kittens. He repeated again how badly big dogs really scared him. Once free of the obligation to listen to a tale of fright, he opened up to Katie and she found him to be a sweet and engaging little guy. It made her almost wish that she had a little brother of her own. Almost…

Soon enough, the teacher rang her silver hand-bell and they all returned to their tables for the art project. Jaxon had grabbed Katie’s hand to lead her around, even before she reached out to him this time. They got a yellow paper, Jaxon’s favorite color, a tray of water colors, some brushes, glue and glitter. With a number of somewhat controlled swipes and blobs, they drew a wolf. At least it was a shape that mostly resembled a wolf. They also made a small pink pig, which was one of the illustrations in the book that Jaxon had actually liked. The glitter was for a moon, because they both had thought that a nice moon would fit in a poster about a Halloween book. 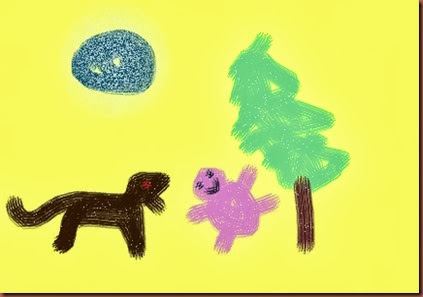 Jaxon’s teacher came around and exclaimed over their picture. She fussed over the animals and the glittery moon, and then she asked Jaxon if he’d had fun reading with Katie. “Yes!” he said excitedly “Katie is my new best friend!” which made Katie grin goofily in spite of herself. Then the teacher asked Jaxon, “What was your favorite part of the book?”, and Katie held her breath. This was not exactly what they’d rehearsed! How would he answer? Little Jaxon just grinned and pointed to the pig. “The pig! I liked the pig the best!” This made his teacher happy, but out of the corner of her eye, Katie saw Mr. Lars look at the grinning child, and he looked very, very suspicious, but what could he do? Katie was pretty sure that they’d gotten away with the deception.

After sharing snacks with their kindergarten buddies, and lining up for a class photo, the big kids told the little kids goodbye, and then made their way back to the Middle School. Katie saw Mr. Lars look meaningfully at her several times on the way back, but she managed to avoid him. When they got back to the school, the final bell was only five minutes away. They had the chaos of dropping off books and supplies in class, packing up, and that’s it. The bell rang and Katie made her escape. Until, the following day that is.