We are such tourists…

We are back in the US and now have to try all the foods that we haven’t had access to for too long! One of my favorite potato chips are Utz’s Crab chips. They sound weird, but are flavored with Old Bay Seasonings and are very tasty. Honor and I went to the store today and found another brand of chips, Zapp’s Spicy Cajun Crawtators. How the heck could I resist?? 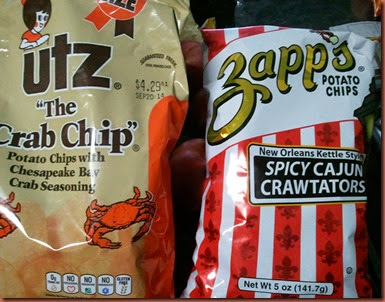 The verdict? Not bad, but nowhere as yummy as the Crab Chips! Utz Rocks!

Anyway, we aren’t just eating weird junk foods. We’ve actually been eating some very healthy foods, as well as working on getting settled here in our temporary apartment. We’ll be house-hunting in earnest soon, but we’ve already accomplished one important job, buying another car. Brad chose a 2011 Ford Edge from Carmax and it’s really lovely. Very low mileage and looks new, inside and out. We hope that finding and buying a house will be as easy and as fun! 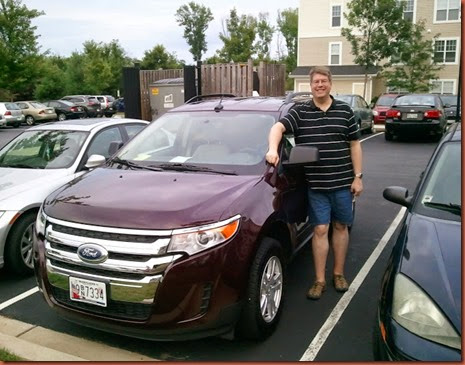 I don’t have any photos, but we finally got packed up, house cleaned up, car given up, paperworks done, and cats inserted unwillingly into carriers. We left the embassy at night, passing by a large demonstration on-going outside the front of the embassy, a peaceful vigil against the attacks on Gaza, and headed to the airport at 0’dark 0’clock.

I think that half the people in Kuwait were also traveling last night, very crowded, but the lines went ok anyway. The Kuwait airport is not big enough for their current needs. Definitely in need of an upgrade! But it works. It was friendly and efficient. The staff were all very nice. We had to go through a security line to get in the door, through ticketing, then a security check at passport control, where we had to take cats out of their carriers, one at a time, to xray their cages. (I was transferring cats, one by one, and crew members were quizzing the kids about cat names and everything… much sympathy to the cats, not so much for me when Pumpkin dug his claws into my arm). Then we had to go through another xray security line at the gate. Cats out of their carriers AGAIN, plus taking all electronics out and powering them on for extra-security precautions. Fortunately, we’d perfected our routine… Brad went through first, to catch all the stuff, kids and I sent all of our shoes and electronics (even cameras and music players!) turned on… then Honor went through to help her dad. Brian stayed with me, and one at a time he helped me extract the cats from their carriers, then, as I walked each cat through, Brian put the cage through the xray and set up the next victim, uh, I mean next cat. The cats learned the routine too. When we got to other side of the machine, each of them, instead of having their heads buried in my chest like the first xray adventure, they had their gazes LOCKED on the xray machine, waiting for their crates to come through, and as soon as they saw it, they start wriggling to get back in!! We had asked to go through the line first (before the gate actually opened) as we were afraid the cats and all out gear would slow things down, and they did let us go first… no pushing or interference from others in a rush!… but we were actually very fast. One guy coming behind us stopped by to tell us how impressed he was with our teamwork!

We boarded quickly, to ensure that we had overhead and footspace. We don’t carry a lot on board, but others do and those damn bins fill up fast. We managed to get our stuff stowed, cats under seat and ready to go, easy and painlessly. Unfortunately, we sat right in front of a guy who was terribly allergic (I gave him Benadryl and he was very understanding…especially as he’d traded seats to sit there!) and we sat right behind a row full of truly obnoxious bratty kids who bounced all over the plane for most of the 14hours and totally trashed their seats. How can parents stand to live with kids like that? I mean, they were like animals. Our ACTUAL animals were better behaved. Our steward was incredibly patient with them… no brats were taped, boxed and stowed in the hold. (I would have considered it). I’m sure the allergic guy was happy to be behind the cats, and NOT in our row!

Anyway, we had upgraded to economy plus and it was lovely to have that extra 5 inches of legroom. Room for the cats, lots of kids’ legs, and me too somehow. Brad sat across the aisle. We’d hoped to have empty seats to move and sprawl out in, but the flight was full. I couldn’t sleep for the entire 14 flight, but it went fast and we arrived safe. We also arrived very early in the morning and Dulles was practically empty. We got a rental VAN, which I thought might be too big – but was cheaper than an SUV – but it held everything. 4 people, 4 suitcases, 4 carry-ons, 3 cat carriers, a dozen donuts and all the new cat supplies (stopped at Petsmart on the way) that we needed for the critters.

And we’re here. Safe, sound, settled, in our Oakwood temp apartment in Maryland. It’s only about 79F here…. big difference from when we left Kuwait’s 115F yesterday! The cats came in, looked at EVERYTHING. They were exhausted but had to climb on everything, sniff everything, play in everything, open all the cabinets, etc. They were very thirsty and tired. And like our previous travels, Ninja is REALLY mad at her siblings for making for go on an airplane. She’s not mad at me for hauling her out of her carrier and making her go through security in a scary loud place (TWICE!). She’s not mad at us for making her stay in a carrier and be carried through scary places – no food, drinks or toilet (they are too stressed to eat or drink). We humans all get off scot-free. Pixie and Pumpkin are to blame and she tells them off every chance she gets! Hopefully she’ll get over it in a few weeks like before.

In the meantime, we have all napped, showered, unpacked, and had lunch/dinner at 5 Guys… yum! … and are just chilling out. Trying to stay awake until the sun goes down at the very least so we can try to get on East Coast time as soon as possible.