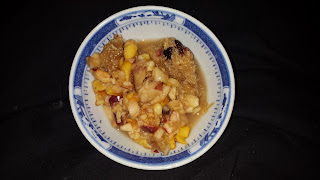 This is not a recipe. I don't have precise amounts or consistent ingredients. This is dessert.

If you're me, cut the fruit dice-sized. If you're Honor, murder them a lot into totally abused tiny, bitty pieces. Whatever.

Stir in some sugar. 1/4 to 1/2 cup, depending on which way the wind is blowing or if it's a Wednesday.

Get a pan. Melt a stick of butter. Add stuff.

I suggest the following stuff:

Step 3 - Put Step 2 stuff on Step 1 stuff. Sprinkle with cinnamon or nutmeg or other such stuff.