For Honor and Carmen and anyone else who likes mods!

This is for modding Minecraft 1.6.4, but can also work for earlier versions of Minecraft 1.6 and may still work well for the newer 1.7 versions. However, a lot was changed with 1.7, and other large changes are in the works, so many modders are not updating their code yet.

1. Read this all the way through before starting any steps. I might jump around. Also, I am not a programmer/coder/expert, so please comment and ask questions or offer suggestions.

2. Create a folder to store stuff. For the sake of keeping my desktop clean, I have created a “Minecraft stuff” folder. I use it for downloads and copying my ‘saves’ folder (good to do before you start modding).

3. Make a copy of your saved games folder (saves)  now. If you have favorite worlds that you want to keep, otherwise don’t bother. Modding may not affect them, but it’s always better to be safe and take the time to do this.

4. (ooh ..let’s back up…) How do you FIND your Minecraft files? You can search for .minecraft, but it’s handy to know how to get there manually too. Here’s how mine works, yours will likely be very similar:

5. FORGE – this is a tool that allows mods to work with the Minecraft game, so your first step will be installing this tool. Satscape, author of Sim-U-Kraft, has made a very clear and detailed video tutorial on this at: http://www.youtube.com/watch?v=wqzaj6en12E He also goes on to explain how to add his mod too, and talks about config files as well. Definitely a good one to watch. However, I prefer to add another step, that allows me to maintain different sets of mods in different profiles, before adding any mods.

Watch his video, and/or follow these steps to install Forge. It is an easy process!
That’s it. Forge is loaded. Now quit the game and we will get some mods!

6. Making separate sets of mods – Mods really add a lot of fun to the basic Minecraft game, but there’s a problem. Not everyone will have the same mods installed, and not all mods function well with other mods. Sometimes they have to be separated so there will be no conflicts! A very easy way to manage this is to create separate profile folders for each set of mods that you want to use. For example, you may wish to have a basic profile, no mods, with the latest version of Minecraft. You might want to have a set of mods to match that of one of your friends’ sets of mods, say, only 5 mods, and ones that use Minecraft 1.6.2. And then, you also have your favorite mods that use Minecraft 1.6.4. How do you keep all that straight? Without having to move files in and out of the “mods” folder in your .minecraft file every time you want to play?

I’ll show you! Say that you want to load the three mods: Sim-U-Kraft, Mo’Creatures, and Treecapitator with Minecraft version 1.6.4  (technically, Mo’ Creatures is only updated to version 1.6.2, but luckily, it works!) We will make a new profile and do just that!
If you go to your .minecraft folder now and look inside the “mods164” folder, you’ll find that it is now loaded with it’s own sub-folders, “config” “saves” “mods” etc.

You can create many profile ‘copies’ like this, although you’ll probably only need a handful. You’ll just have to remember that, when installing your mods, rather than loading the mods into the “mods” folder under .minecraft\mods, you have to go one layer deeper and load them in .minecraft\mods164\mods.

7. Now for the fun stuff! Mods! It has become quite easy to add most mods. Some require that you unzip files. Some require other mods (dependencies) to help them function. For example, Treecapitator requires bspkrsCore. When you go to a modder’s website, you need to carefully read the site and find out about these requirements. Often they explain them well and give you a link to go get the latest version.

It also, while slow, makes good sense to add new mods one at a time. Opening the game and playing a little bit each time, to make sure each new addition works properly before adding the next.

I will walk you through three of our favorite mods in this post. I will try to add a list of other favorites later, as well as a tutorial on what to do if you ever get BlockID conflicts. (which is a common error to receive when combining multiple mods).

SIM-U-KRAFT – This is a mod that adds people to your game. From Satscape’s website:

I will direct you again to Satscape’s video tutorial for this! It is very helpful, but here are the basics:
That’s all! Go play and try it out. When you start a new world, or open an existing world, it will ask you if you wish to run Sim-U-Kraft.

TREECAPITATOR – This is a small mod, but one of my favorites because it is convenient and adds more ‘realism’ to the game. In vanilla minecraft, you have to climb up a tree to chop it down block by block… what’s up with gravity?? With Treecapitator, you just have to chop the bottom tree block (more times than a single block.. a lot if it is a large tree) but the entire tree with come down in an exciting rain of logs, apples, and saplings!
Yep. You are done! Start your game and test it out. You should now have Forge,  Sim-U-Kraft and Treecapitator.

Mo’ CREATURES -  This is the one likely to cause trouble as it is a big mod and it, technically, is not the proper version. If you are running Minecraft 1.6.4, all of your mods, and their required (dependencies) mods, should also be 1.6.4. However, there is nothing wrong with trying older mods out to see if they might work anyway. If there has not been a huge change (1.6.2. to 1.6.4 is not major) then you might get lucky and it will work!

Mo’ Creatures is a mod that will add a lot of very cool animals to your game! Everything from insects to werewolves… most are harmless, but some will add a lot of danger to your survival skills too. Polar bears are NOT your friends!
You can go find more mods and add them in much the same way as I explained above. Make sure they are FORGE games, not ModLoader. If you have another mod that asks for the CustomMobSpawner, there is no need to add it again, as you’ve already got it for Mo’ Creatures. Same with bspkrsCore.

There is a very good list of mods with links, organized by Minecraft version, here:
http://modlist.mcf.li/version/1.6.4/

Have fun, and don’t forget to comment with suggestions and questions!
Posted by Connie at 7:05 PM 0 comments 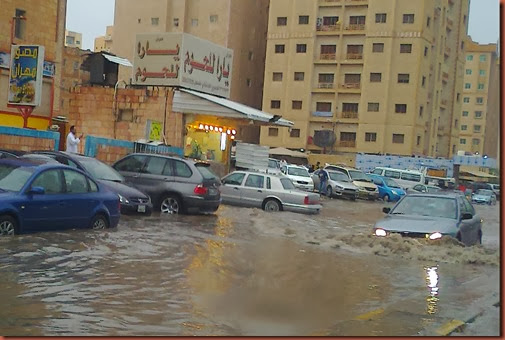 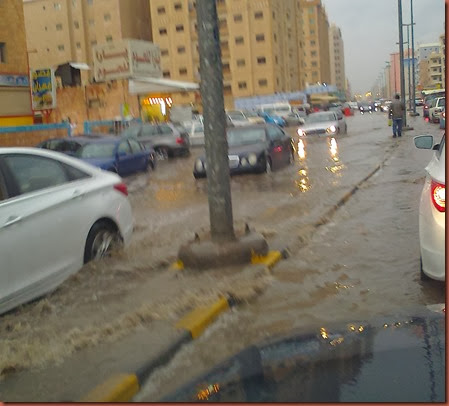 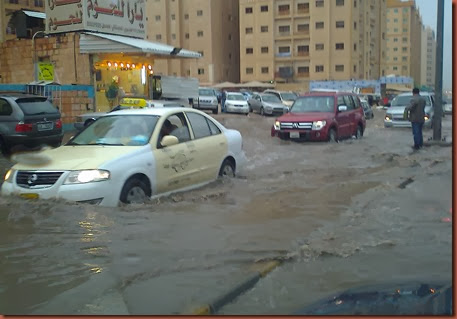 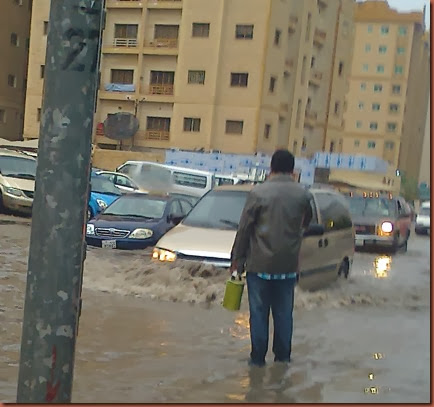 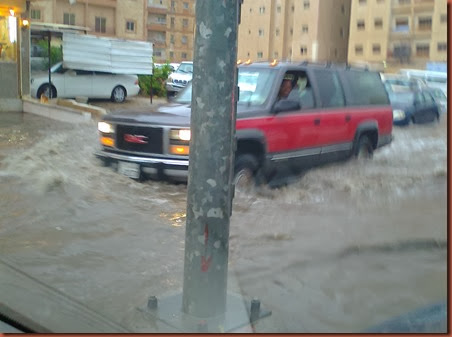 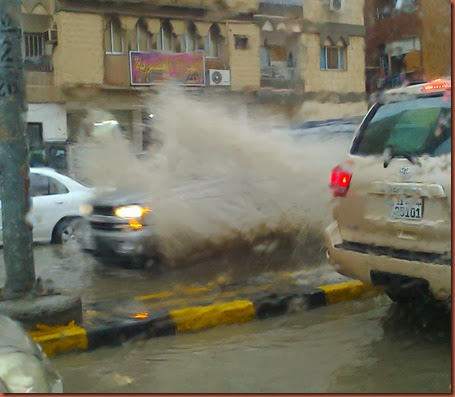 Hope everyone had a very fun Halloween. Here are a few photos from our celebrations.

Brian’s Middle School had 3 days of dress up. One day was Wacky Day – he wore a nice serving spoon on a lanyard. Why go all out when you can go with one really great accessory? For 80’s day, I managed to convince that he could really rock the rock look, and he did too. 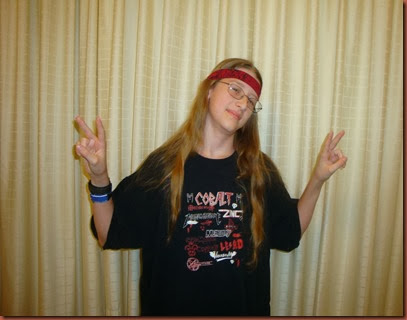 On Halloween, both kids got to dress up. Brian went as a knight and Honor went as a zombie pirate. 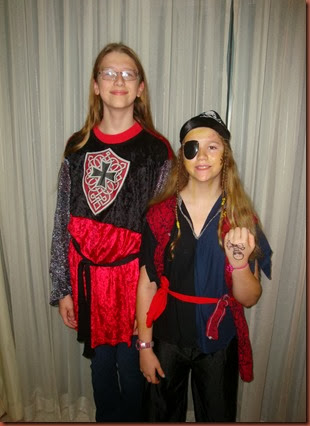 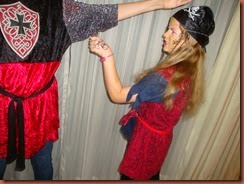 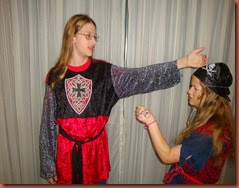 The embassy hosted a big party for the kids after Halloween and both kids were very helpful with set up and running carnival games. Honor and a friend helped with a bean bag and ring toss game. Brian helped with a fishing game, and I helped run a ‘Monster Hunter’ game, where we had a good spirited volunteer dress up, act ‘monsterous’, and allowed little kids assault him with wet sponges. Good man!

Here is the bean bag target that we made for the carnival. Honor helped me paint it… and I painted Honor. That’ll teach her to dare me…

Ninja helps to model it. 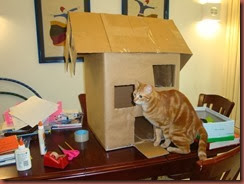 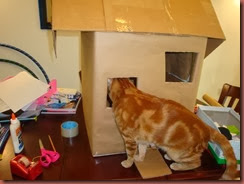 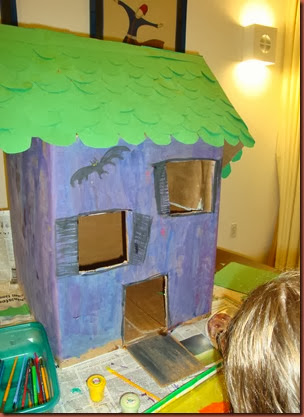 Rather than plain ol’ square bean bags, we made fancy ones… 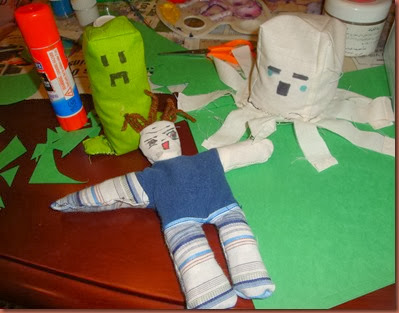 And we also had a bat bag, witchy bag and mummy bag 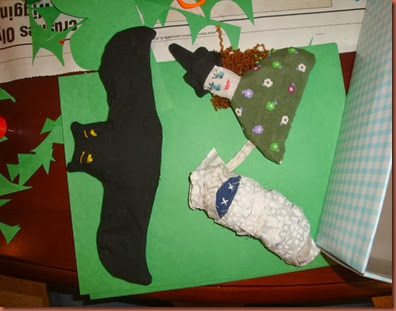 Before heading for the games, I painted my death monk hubby. 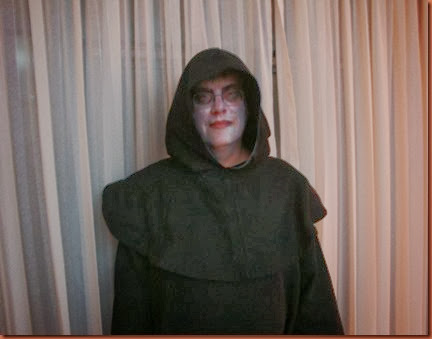 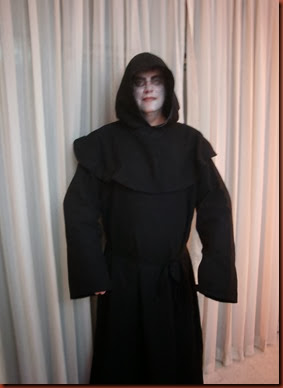 And Honor and I decided to be pirates together. We had thought about being zombie pirates, but decided to be ‘regular’ pirates instead. 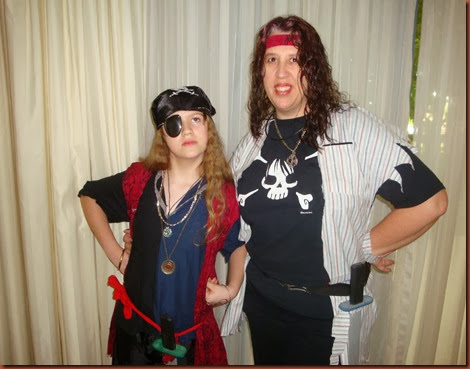 Honor got to be the Captain… 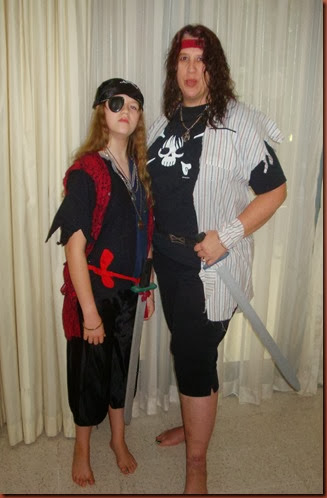