Secret of the Ancient Egyptians

Someone call Dr. Zahi Hawass. We think we’ve discovered how the treasures of Ancient Egypt were preserved so well!

It wasn’t wisdom that we found in ancient scrolls.

or cats with glowing heads,

No. None of that.

So, what was it already?!

Get ready to take notes….

and promise not to tell, shhh!

It’s all in the packing!!

Egyptians don’t mess around when it comes to wrapping stuff up for safe journeys, whether it is to the afterlife, or abroad, and apparently, these centuries of practice have paid off.

Thanks Sea Bird, your packers did a great job!

Now… our things have finally arrived. My hands are stiff and sore from struggling to unwrap everything – yes, I am fully convinced that if our shipment had been lost for a thousand years, future archeologists would have had a field day with unearthing and discovering all of our perfectly preserved household junk! The methods employed were darned effective and hard to undo. (Few minor dings and things, but very impressive nonetheless!)

So, now it is our turn to run around in circles and restock our new home.  Which might take awhile…

Snuggles and cuddles are something we have a surplus of in our home… not that I am complaining!

One, Two, Three, kittens in a tree. Are you looking at me? 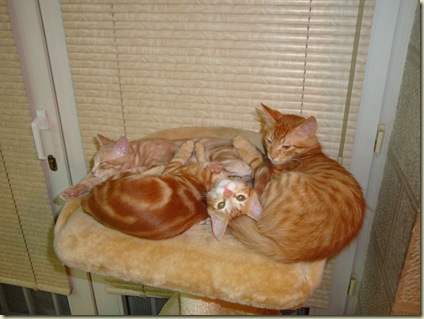 TV watching buddies (ok, maybe only one here is interested in the TV, but they’re still cute). 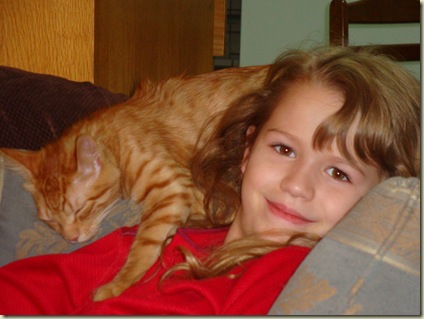 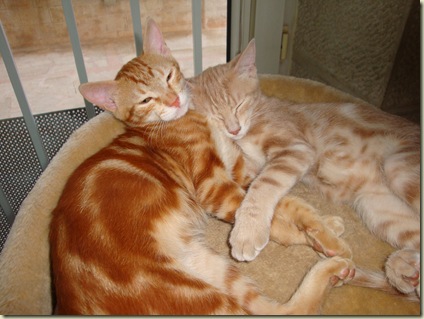 Pixie has her boy 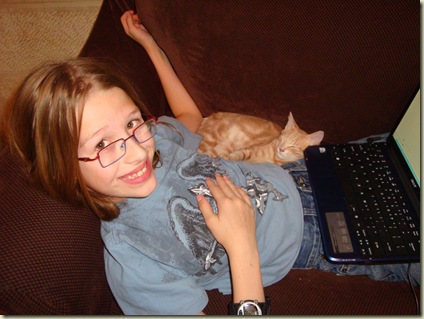 And, in order to obtain the perfect, toes up, belly rub position, Pumpkin will often somersault head-first over my shoulder, onto my lap… usually without much warning. It works. 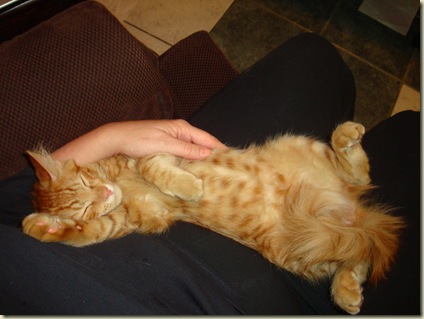 I never knew a cat more determined to show off her balance. Pixie is clever. She gets an idea to do something, and she figures it out. We have to watch that girl… keep cabinets closed, car keys hidden, credit card numbers secure, etc. This cleverness, and desire to take on the world, includes self-taught lessons on how to climb, traverse, balance… etc. She is always the first, and always the most adept. 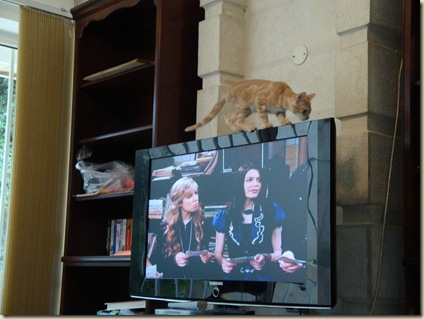 I never knew a cat, or cats in this case, so determined to run away with my kitchen linens and sponges (even the scrubby metallic things). I can be laid back about a lot of things, but dish cloths, towels, and especially sponges are washed and replaced (the sponges) often in my kitchen. My ‘ew!’ factor is delicate and easily tipped with these items. I don’t let them become stinky or otherwise smelly – so why are the cats attracted?! I wash the washables in hot water and bleach the heck out of them… but they are divine kitty treasures, and I must hoard them if I want to keep them to myself.

I never knew, before owning cats, that they can have favorite toys, just like kids. Misty and Ramses always had preferences, and these kittens do too. We got them a bag of Christmas toys on sale after the holidays. I told the kids to dump them on the floor, let the cats grab a couple, then we’d stash the rest. While Ninja has her socks and did not pick a favorite, Pumpkin found a ball - 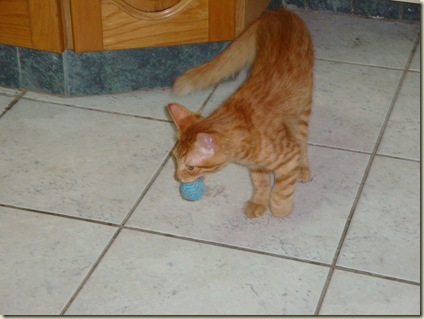 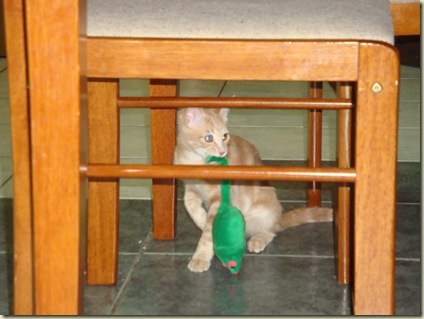 It’s been weeks, but Pumpkin still loves his blue ball, and Pixie, her rodent. They play with other toys, but these are the favorites.

I never knew cats so thrilled to share the litter box. Most cats prefer privacy. They do not like to be startled. It is recommended that you have one box per cat in your household. Some cats will not  use a litter box that another has used. Well, these guys have not heard this bit of cat lore. When they were babies they knew to eliminate in the box from the very start…  out of the bushes, into the land of people, and they knew what was what… but they wouldn’t go alone. If one kitten needed to go, he or she would meow sadly until a sibling joined them in the box… never mind that this sibling would always annoy the heck out of the toilet user, they called for company anyway. Now they are bigger and there’s less room, so we have fewer potty parties, but it’s still a community event… especially if mom – meaning me – starts digging, aka, scooping up the buried treasures to throw away. Most cats I’ve ever known vacate the area when it’s cleaning time, as if to distance themselves from any blame or shame, or to give me privacy, or who knows?!? But these guys are thrilled with my digging abilities. They are so proud of me! I have to make them stay out of the box to keep them from helping me dig. I must make them wait to add more treasures. I even have to watch the bag I’m scooping the dirty sand into as once Pumpkin hopped right in and peed! “Look what mom made! A new potty!” (He got a bath right away, because peeing in the plastic bag you’re squatting in is NOT neat, but did that stop him from trying again? No.) They will also sit on my shoulder, or atop the litter box, or beside me… patting or holding the hand that is using the scoop. I mean really guys, I know what I’m doing!

I never knew that I was a tree. I’ve had cats want to climb me before, but not obsessively. It’s not like their feline mom had shoulders they could ride on, so where does this instinct come from? Now I admit, if it were only graceful Princess Pixie, who can be floor to shoulder in a flash – no claws involved – and who can ride without holding on(!), I wouldn’t complain. But often, the whole herd will come zipping into the room and be halfway up before I can even think to say “Auugggh!”, or perhaps “No!”, or some other useful phrase. Three cats, two shoulders, and somebody is going to lose out… usually me. It seems my best defense is to become “unstable” as soon as the climbing starts – which is, I am sure, of great entertainment to my family – but it’s slowly working, the kittens are gradually giving up on this game, and my skin might (might) survive without permanent alteration.

I never knew I needed so many cat hugs! I swear, Pumpkin is on my lap now, bashing his head on my chin, kissing my cheek, and has his arms around my neck… So sweet! How could he have ever been destined to be a feral cat?? I feel very loved, but it makes typing difficult.

I never knew that I still had so much more to learn about cats! (But I did know I’d love every minute of it)! 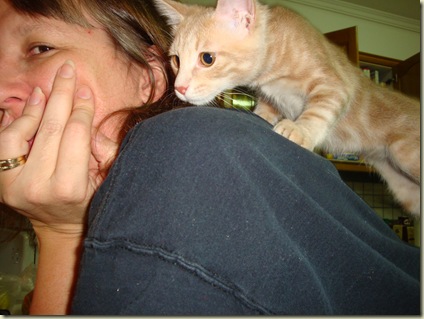 Kids. Furkids. For some reason, whatever mom does is of great interest.

Email ThisBlogThis!Share to TwitterShare to FacebookShare to Pinterest
Labels: cats, me, Pixie

A Stage, and bits of tile

I’m looking out the window. The rain has slowed to a drizzle, for now, and the sun is peeking, but the wind is gusting so hard that the water dripping off the building is, more often than not, flying away parallel to the ground. It’s been stormy all night. I have serious doubts that my, most probably drowned, wifi will let me post this today, Monday, but I might as well get it ready to go.

I have a few more photos from our last trip to Jerash. I am thinking this is the far north end of the site, but I am not completely sure as we were turning around to head home before the sun went down.

The north gate area is an imposing stretch of road. According to this map, the large building in the foreground is the North Tetrapylon, and beyond the North colonnaded street, is the actual gate. I want to wander down this path another time. 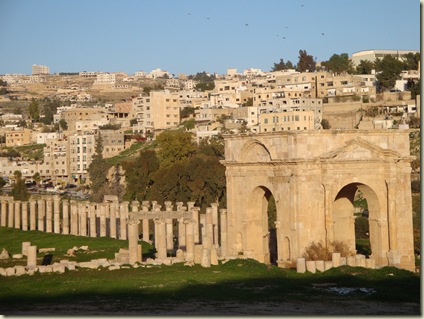 It makes me wonder why such a grand entry point was needed in this location, at that time? Apparently this way led to Pella – I’ll need to read more on that city. 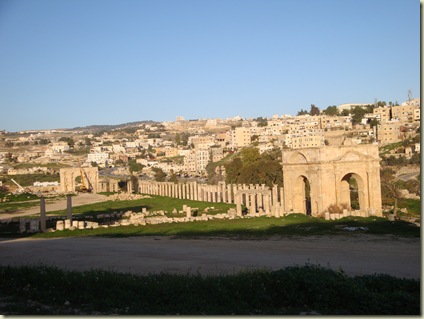 I am not sure what this ruin is. I need to find our book – or get a new one on our next outing! It may be the West Baths that were destroyed by a massive earthquake in 749AD, as apparently, were many things in the region. 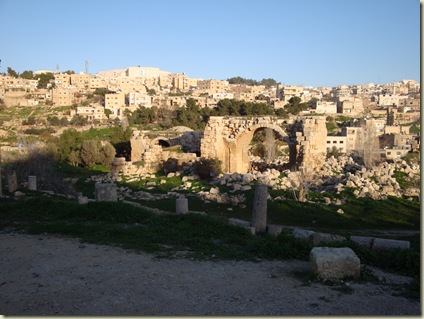 We also explored a bit of the North Theatre. It seemed smallish from the outside, as well as upon entering this entry hall. 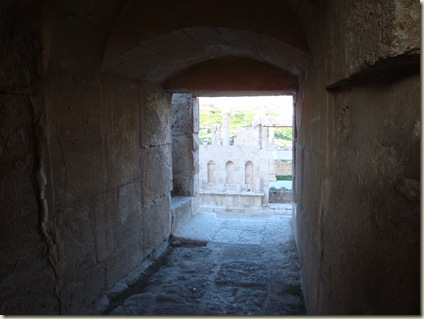 But once we were in – wow! It opened up, and down. The kids were immediately energized and wildly enthused. They were instantly down the stairs and all over the place – the place has energy! 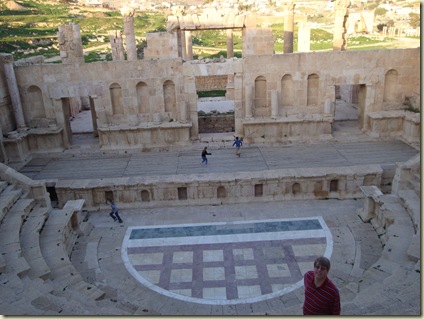 After romping up and down the stairs and around the rows of seats, we made it back outside… and had to take a break. Honor was so winded that she just plopped right down in the dust! I believe Brian had run off again when I took this photo… he still had some energy. 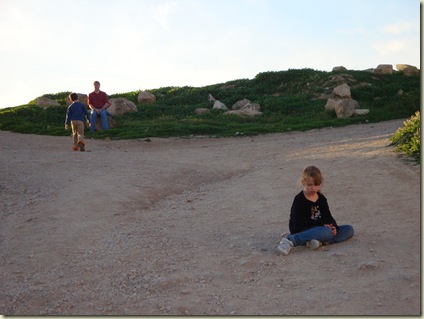 As my knees were used up, and Honor was done, us girls turned back to the colonnade to make our way back to the car. Brad, the boys, and our friend, went a little bit further to check out a number of the broken Byzantine Churches down the road. They found some amazing mosaic work, which dated to 553AD.

Actually – first – this bit of mosaic floor came from up near the Hippodrome. I forgot to include it earlier, so I’ll lump it in with these mosaic pieces. 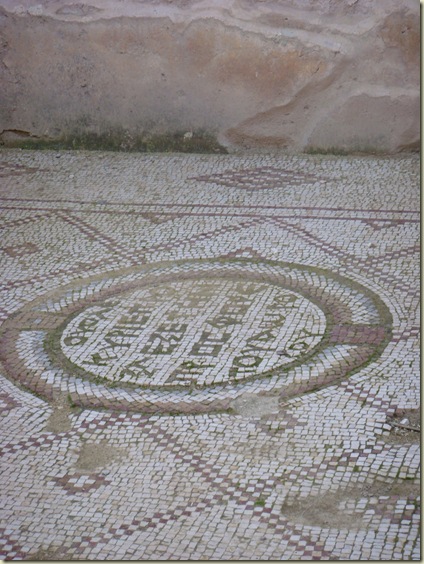 Now, back to the other end of the complex – these are from the churches. 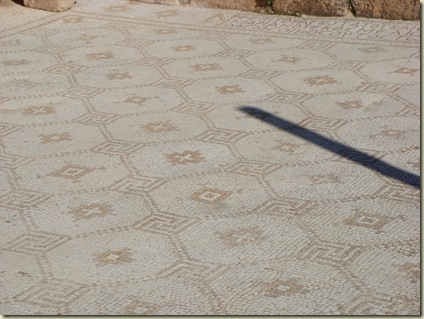 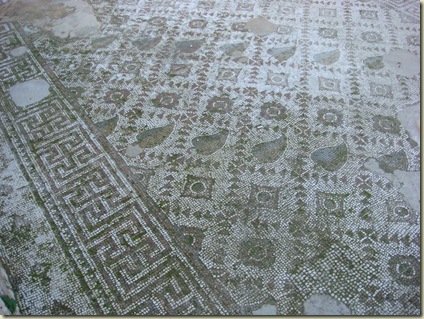 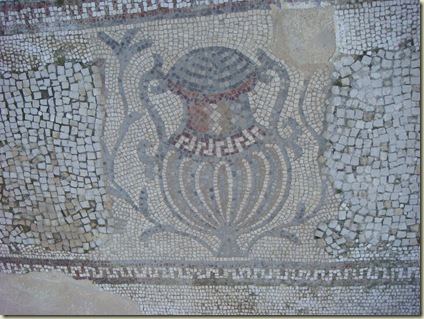 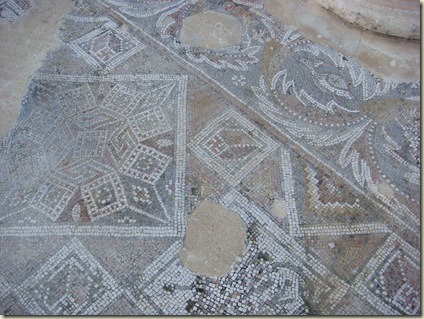 I like the square below – can I get this is my living room? 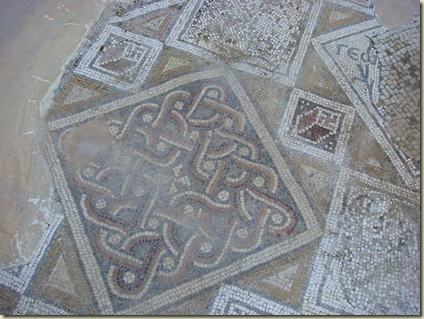 Below on the right, is a sad example of religious fundamentalism, where this lovely art work was vandalized by those of the 8th century Christian Iconoclastic Movement – they forbade the depiction of humans or animals in art, and destroyed parts of these mosaics. I suppose we might like to look back on such destruction as primitive and based on ignorant superstition, that hopefully, more modern and civilized humans outgrew, but unfortunately, it has continued through the centuries. In Egypt, in 1378, with an attack against the Sphinx , and disgustingly enough, another such attack within this very decade, in 2001, when the ignorant, hate-filled extremists of the Taleban destroyed the Buddhas of Bamyan (built in 507ad and 554ad). 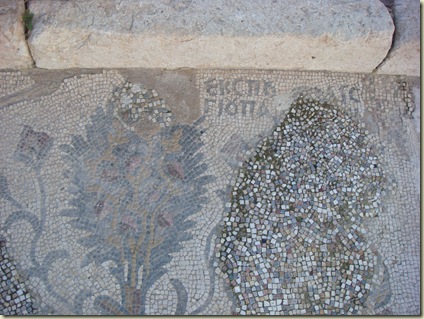 Was this a lady, or maybe an angel, playing a harp? 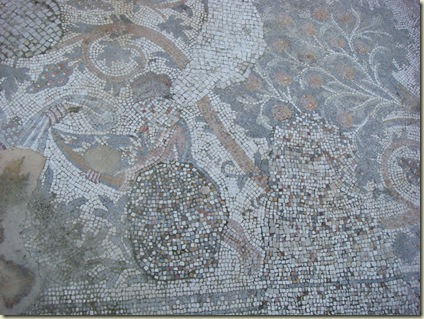 Sections of these floors are supposed to depict the seasons. 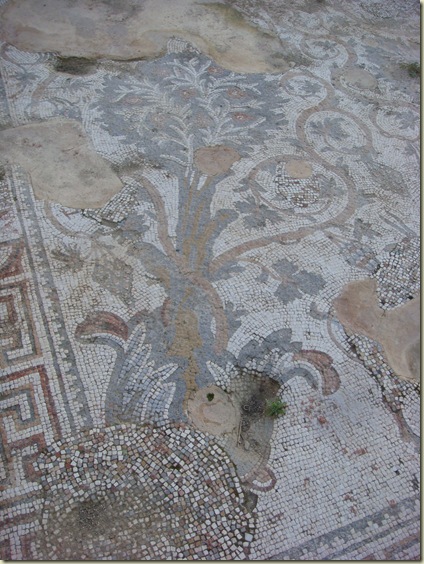 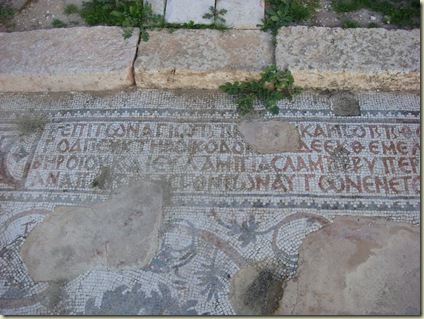 I see the head of a peacock here. I don’t get the destruction. A peacock is a beautiful bird. If god did not want us to be awed by its loveliness, why did he make it so pretty, or, more importantly, why did he give us the emotions to appreciate it? 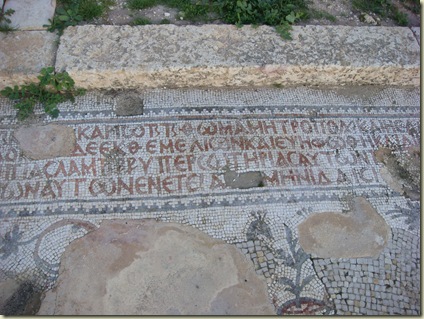 In my opinion – the rantings of certain humans have done far more harm than any depictions of god’s creatures could ever do (including human creatures) and yet words remain…. although, in the case of artwork like these tiles, I think that’s wonderful, as even though I cannot read them, I can appreciate the work and their historical importance. (I know, I know!…  Tolerance, logic and education are to extremism, ignorance, and fundamentalism, as water is to oil… but I can wish it were otherwise, can’t I?!) 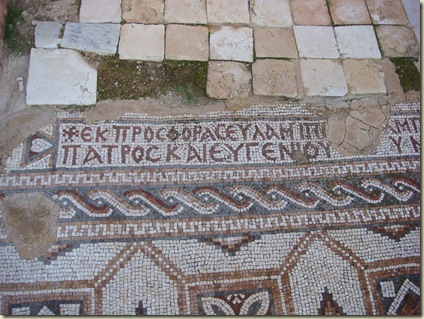 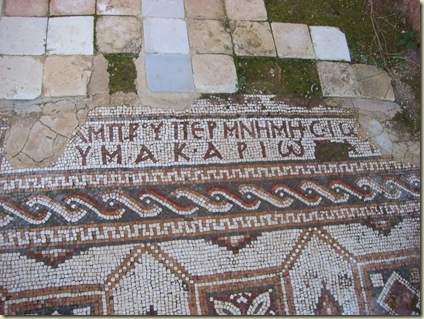