One of the things I like best about Jerash, is the multitude of rocks. I suppose that technically these are carved stones, and no longer ‘rocks’, but when I am out there, I simply think “Wow! Rocks!” They are everywhere, and the details and carvings are plentiful and amazing. The variety of artistic styles is also very intriguing. 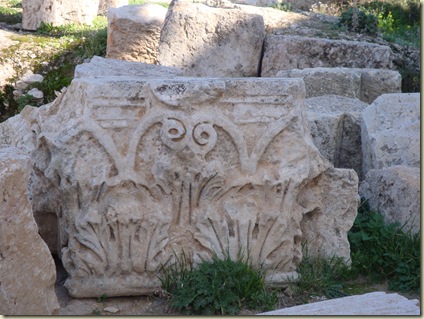 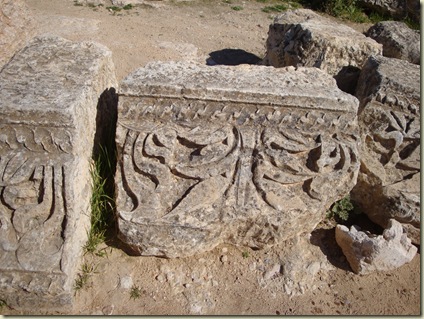 The one below was in the hippodrome, looking down on the outside of the stairwell which brought us up to the bleachers. I think it says “Keep your seat or you’ll fall into this stair pit, crack your head on this rock, and then roll out into the arena where you’ll be run over by chariots or eaten by gladiators.” (or something like that. I could be wrong…). 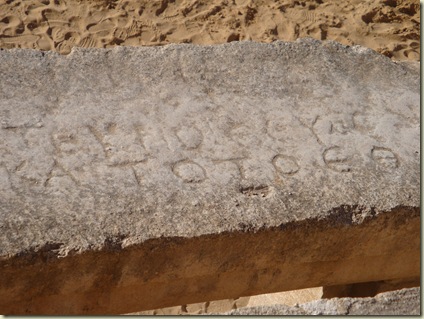 Some look randomly stacked. This doesn’t look like the original placement. I get the impression that someone(s), not professional archeologists, came along at a later date – after the Romans, but still long ago - camping, herding sheep, soldiers bivouacking , or something… they got bored… and for lack of TV, started putting things together. 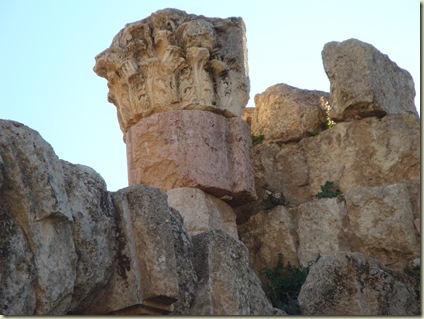 It was very green. We have had a lot of rain lately, and bits of life were poking up everywhere. Like this flower in the forum. 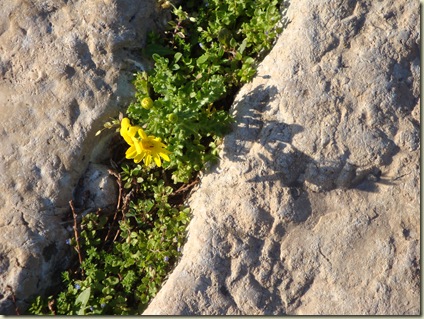 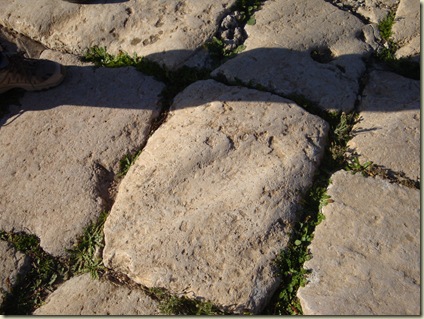 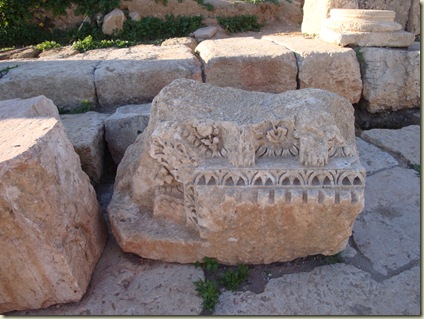 Honor was tickled to find treasure “X marks the spot!” 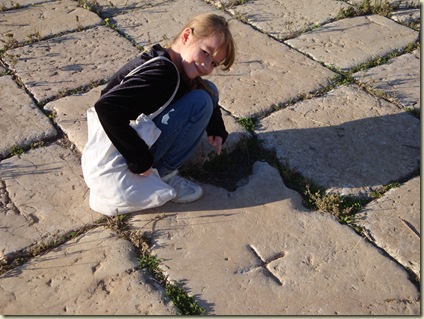 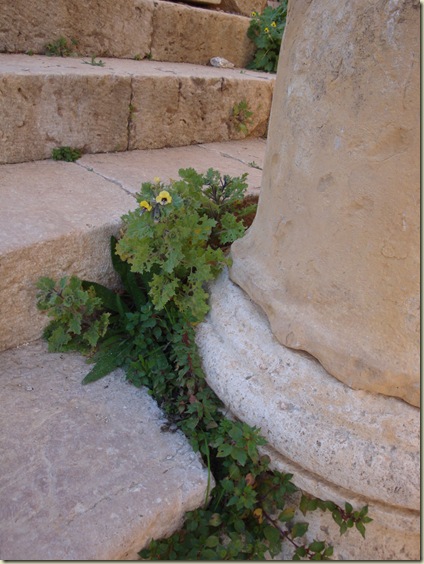 Brad and I both liked this little stairwell – I focused on the flowers, he came along later with his camera and took a shot of the stairs. 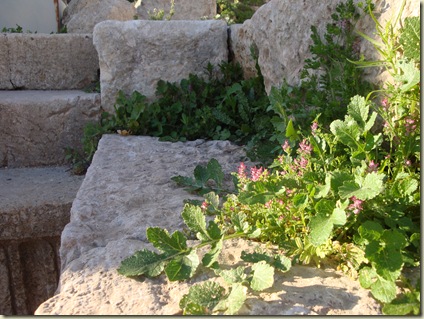 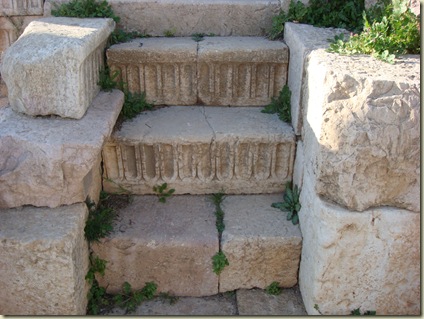 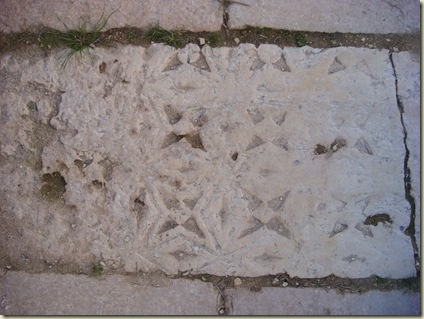 I believe these last four were taken near the Temple of Artemis. (The last three for sure, but I am not sure of this first one). 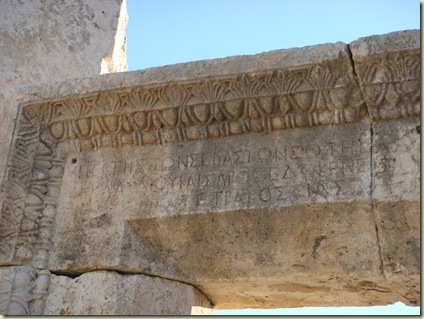 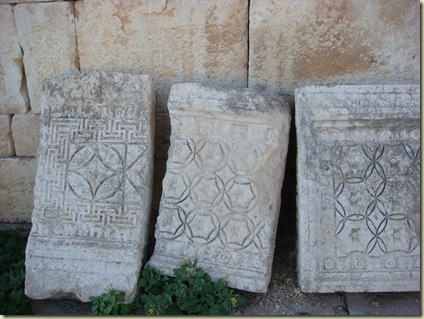 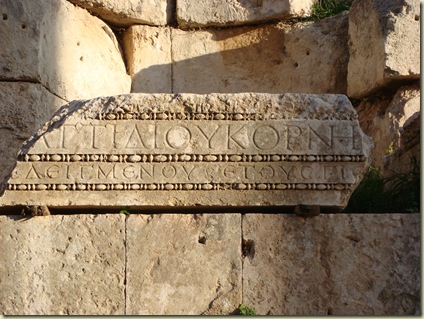 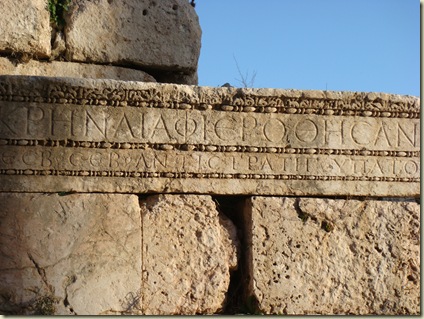 For the greek, ask spence what it says, you know he can read ancient greek, right? When we were at Jerash, he was reading all over the place for us. Yeah, now I'm gonna be bummed again about not going to Amman. Oh well!

What? You think my translation may be a bit off?! ;-D Don't be bummed about not coming here... I am trying my best to bring "here" to you!

You are so fortunate to walk among these rocks and experience history. I am so jealous!

the rocks look really nice.How is your now home? from RACHEL

Hi Rachel! We are loving our new home - except for the fact that it is so far away from our family :( We would love to have you come out and see for yourself, but we know that is hard, so I try to post as much as I can. This house has so much more room for us - even though it actually has less rooms than our last apartment. It's just bigger and laid out better. We also have a nice garden, and I have WINDOWS in my kitchen again for the first time since before your cousin Brian was born! It will be even better once we get our household goods. We moved here with 4-5 suitcases, we mailed some items, and we have since bought some things, but the rest of our things - books, family photos and decoration, movies, toys, all my pots and pans, extra sheets and towels... all that has yet to arrive. Hopefully it will get here soon - We kinda miss it! Keep watching - I will be posting more Jerash photos soon, and I also have more of the cats. Honor has a story to share too. Love you!

How awesome to have a place with such history and stories on your backdoor step. I love things like spotting the worn wheel ruts etc Some of your pics have carvings that look remarkably similar to what we find at the top of columns etc at Angkor which is kinda cool too. We loved spotting the holes in some of the heavier stones at the Colosseum and Palatine Hill just like at Angkor they had used similar techniques to move and place things half a world away! It creates a human kinship somehow- we are all really just the same.

Oh, these are so awesome!!! I love the writing, you can totally see what it would have been like back in the day . . . truly amazing.