We went to Jerash again this week and had a lovely time hiking around the site. What made this visit even better than before is we were able to share it with good friends who were visiting Jordan! 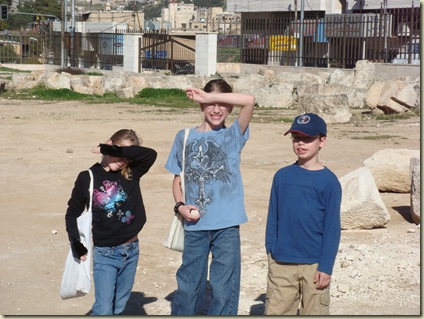 We had a beautiful day for an outing. It was sunny (the kids thought it was too sunny for photos) and the temperature was cool and pleasant. Brad was feeling great and able to hike without tiring – good recovery! I am so happy that he is doing so well!

We timed our meet-up so we could have a bit of lunch, then make the afternoon Roman Army and Chariot Experience (RACE) show. It was a short event, about 30 minutes, but it was very informative and interesting. I must say that I’d heard, while I was active duty Army, that some of the maneuvers and drills we performed had ancient roots – it was extremely cool to see a demonstration of the Roman drills and recognize what they were doing and why. 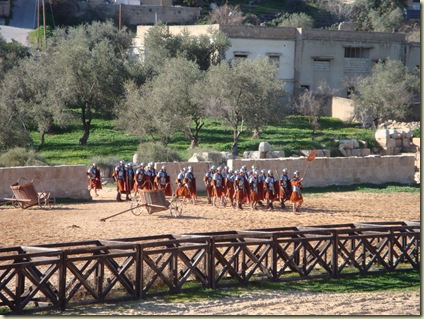 Passing in review. A way of giving a salute, and demonstrating drill and ceremony, that is very common with all militaries around the world, to this day. 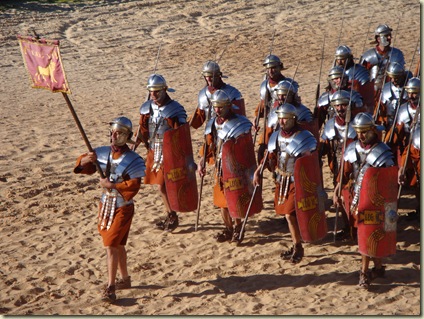 Present Arms! (or whatever the command was in language). The narrator explained the soldiers’ weapons – the metal point of this spear was designed to bend when used to stab an enemy in battle, preventing it from being taken and used against them. 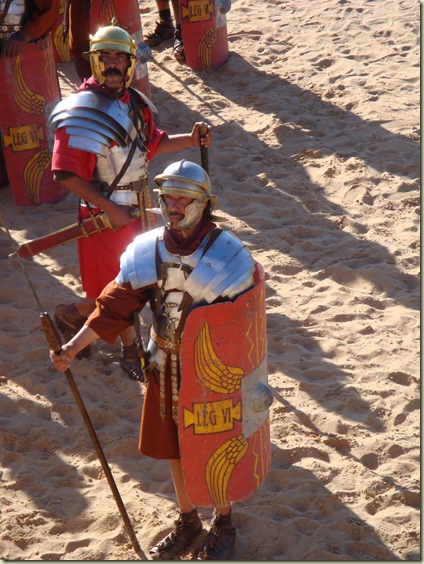 These soldiers trained 8 hours a day, every day, for 25 years before being eligible for retirement, when they’d earn a bag of gold or plot of land. So, how do you feel about your annual leave now?

They demonstrated their fencing techniques. 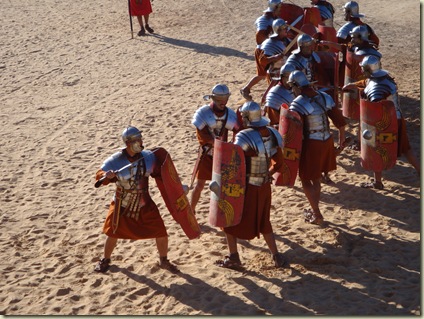 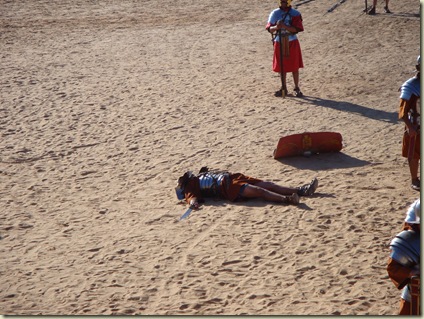 Demonstration of another offensive technique – the legion provides a defensive barrier for an engineer, allowing him to safely set a fire or explosive against an enemy obstacle. 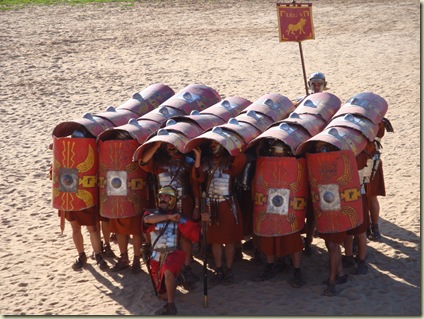 Demonstration of an anti-cavalry technique: 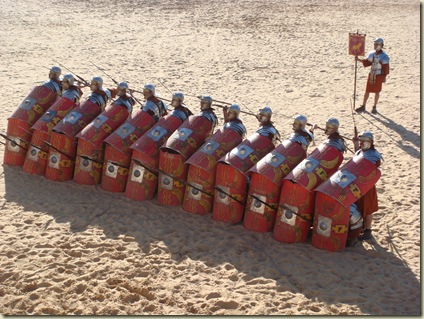 Honor stole my sunglasses during the show. 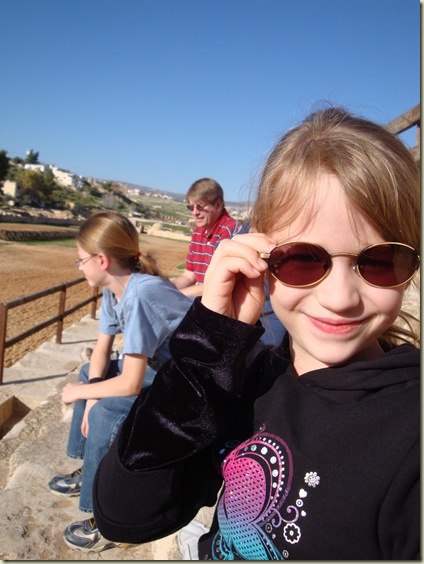 Brian just enjoyed the show. By the way… notice the bleachers in front of Brian – two steps down and there’s the opening of the stairway to the ground. This would never be safety approved by Disney Inc.! But never mind that… it was simply very cool to be sitting on the same seats, watching the same type of show, that the Romans did, centuries ago. 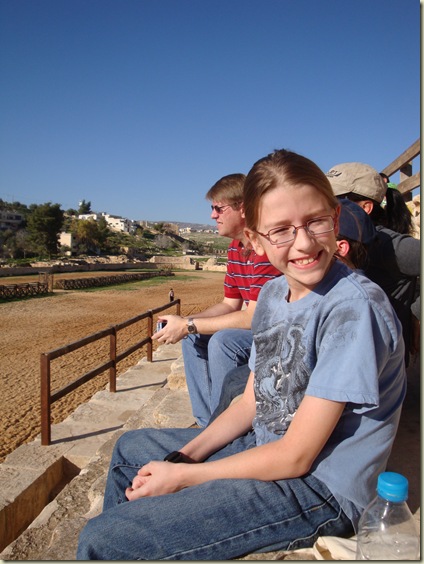 After we learned about the professional soldiers, they brought out the slaves and villains – the gladiator warriors – and we watched these guys spar for their very lives. We got to vote on the fate of the losers as well… 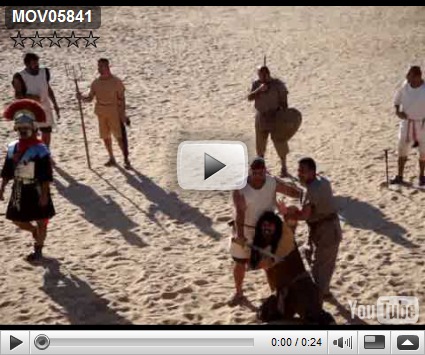 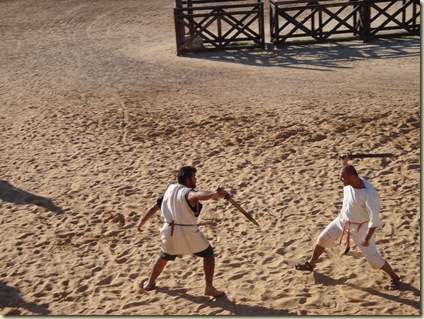 The loser pleads for his life… 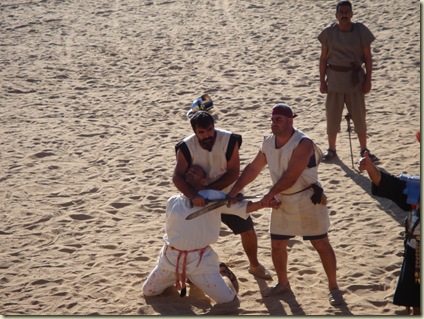 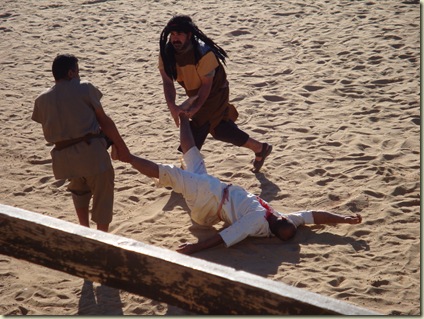 After we watched the sparring, the chariot race began:

There were three chariots and they ran this course 4 laps or so, no sweat. It was beautiful to watch the horses run! The narrator said that this hippodrome was one of the smallest in the Empire, although it could seat approximately 15000 spectators, and that Emperor Hadrian visited in the winter of 129-130AD. 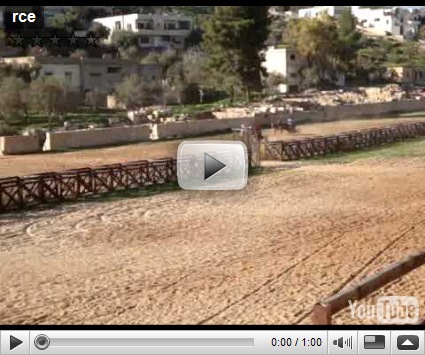 Parking after the race. 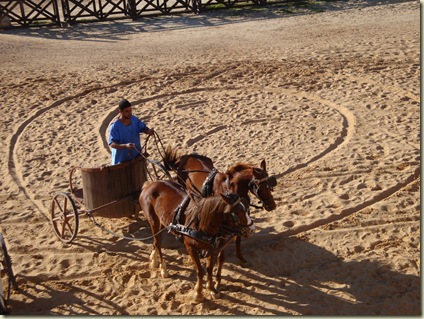 After the show, we got to meet the performers. 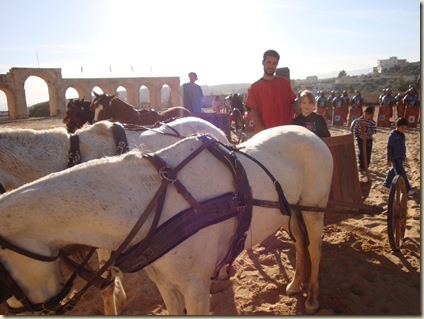 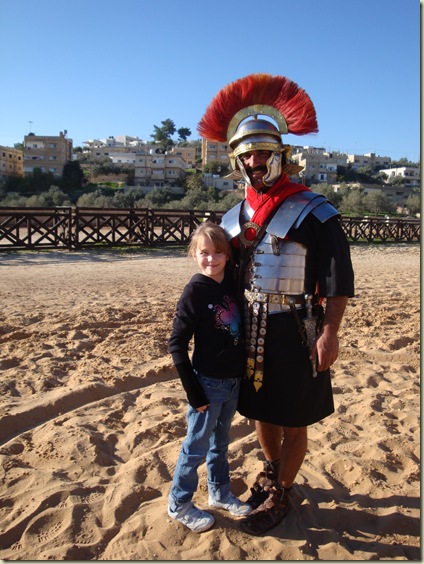 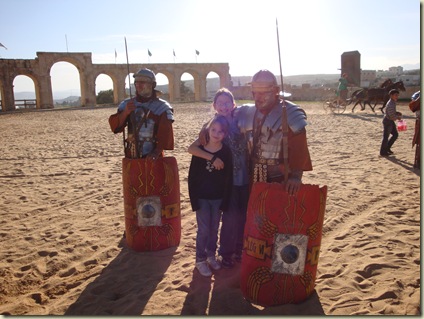 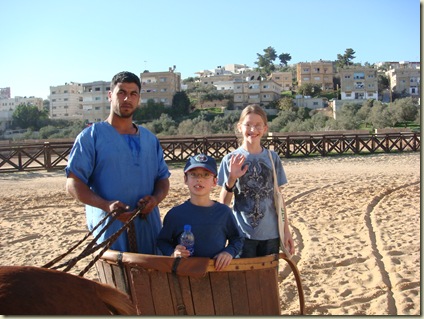 I definitely recommend making this show a part of a visit to Jerash – it only takes a short bit of your time, and being able to say you experienced a bit of live history, on the actual site of said history, is a very unique souvenir!

Great photos - and the sky is so blue! And noone is wearing jackets and gloves! Such fun!

The sky was very blue - and usually is! We are still struck with amazement over this odd color up above... after so many brown or grey days in Cairo (and sometimes yellow), this blue stuff is miraculous to our eyes! It was about 60-65F and so we headed out in light jackets, but the sun was warm and we were very active - jackets were peeled off almost immediately. It was a great day to be out exploring :)

How cool is this!