After our Thanksgiving dinner last night, we sat down to watch the Shrek 3 movie for the first time. I won't give any spoilers, but one character breaks out dramatically into the "Aa-aaa-aaaaah" part of the Immigrant song by Led Zepplin (very unexpectedly - I laughed until I choked). Brian and I both tried to ID the song. I guessed Led Zepplin but wasn't 100% sure - I'm not too good with naming title and artists. But Brian nailed it. Not in the traditional way, but he definitely knew what he was talking about. He said, "It's the song from the internet movie with the warrior kittens." Oh yea.. .queue the Viking Kittens!
Posted by Connie at 11:56 AM 1 comments 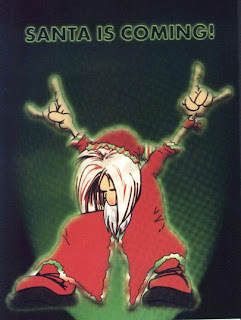 Christmas is coming and the kids are starting to get excited about Santa. We are starting to think that we need to get on the ball and order stuff because the APO mail can be iffy at this time of year!

Honor was sitting next to me yesterday morning, so I handed her the J.C. Penney catalog to look at. I asked her what she thought Santa might bring her. Oh, her eyes lit up! She wanted to make a list, but as she is only 4 and not reading/writing very clearly yet, I handed her a pen, and told her to just write her name in the catalog next to the things she liked. I pointed out some things that were too big for our living space (like a huge kitchen/laundry play center), or some other things that we just cannot use (like a bicycle :-( - we have no safe place to ride!).. and she listened very well, and asked questions about items she was not sure about.

I also went through the catalog with Brian and we discussed some of his wants, but he was not as interested in writing things down. We had a good long talk though.

After the kids went to bed last night, I went back and looked through the catalog... all those little 'Honor's, 'H's, and wobbley circles were soooo adorable!! I'm going to have to keep a few pages of this catalog for a keepsake!
Posted by Connie at 9:45 AM 0 comments

There's a rat in mi kitchen...

We had to deal with something yesterday I have never faced before - a rat! I have never even had a small mouse in a home, but this rat got in somehow. We're not even sure how and we've looked all over. We think it may have pushed through a window. It wasn't here long because we found no chew marks, and droppings were confined to 2 small areas.

Brian saw 'something' on Saturday. He thought it was big enough to be a mouse - but was not sure. We fight ants when they decide to march on us from ?? some other place, but we usually do not even see roaches in this building. Not to pick on Cairo, but this is a big polluted city, lots of garbage, etc. I am actually surprised that we do NOT see roaches... but we are cleaning fanatics. There are a lot of rats too, and it is very common to see them scurrying about. I have even seen a mother mongoose (weasel?? ferret?? - not sure which it was, but definitely one of the predators) carrying her babies from nest to nest. Enough rats to support a family of rat eaters!

Anyway, our building and apartment facilities are kept clean and the trees/litter is picked up etc. but it should still not be surprising to see a rat - but we were ;-D Anyway, on Sunday, our big cat was after the freezer. We assumed he had found Brian's 'mouse' - which we were still assuming was probably a large roach. Misty is too old to jump that high anymore though so he had to just growl on the floor (he's a dramatic hunter - even with flies). Well, yesterday afternoon, I walked by the freezer, and back between 2 boxes I had up there, was the rat.. sitting there washing his whiskers. Creepy, but cute.

Ahmad first tried a baited trap, and came back in an hour to check. No luck. He went in the kitchen - with all the doors closed and blocked - and we heard all sorts of moving and banging! Finally he called me in. I saw that he had moved all of the major appliances and he told me he thought the rat must have gotten out somehow - we banged some more on things, and I was about to agree with him (we thought there must have been some hole somewhere) - then the rat popped out from under the freezer - I had to lift my foot or it would have scurried right over my bare toes! Ahmad was swinging a stick, I had a mop (what i just happened to be holding when the rat jumped out), we were blocking and jumping (as the rat ran under us ;-) !). BOTH of our cell-phones picked this time to go off - so we had a 'soundtrack' of 'The Mexican Hat dance' and some Middle Eastern tune, combined. Brad was outside one kitchen door asking if we were all right. Honor (our biggest cat) was at the other door, demanding to know if we'd got the rat yet, she wanted to see it! It was insane - but it ended quickly. Alhamdullah - for us, but not the rat. Ahmad struck the rat once and killed it. Probably suffered less than if our cat had got it or had we had to poison it.

Ahmad helped us straighten the kitchen again - how often do you get to clean under/around ALL of your big heavy major appliances anyway?? - and even insisted on mopping. You know I tipped him well, although he tried to insist that catching the rat was his job, I made him take it for all the cleaning! (which was not his job!) He even humored the kids and showed them the dead rat.

Anyway - checkmark beside another Cairo adventure/learning experience. Now, if I can only stop singing UB40's "There's a rat in my kitchen, what am I gonna do? I'm gonna fix that rat, that's what I'm a gonna do.."
Posted by Connie at 10:17 AM 1 comments

The original webtoy is here: LINK

It's worth watching, and you can make your own, but it can be very slow to load (at least it is with our slow/flakey ADSL). Here are some pics of us:

Honor, four, was playing a game on the computer, I was in the kitchen cooking lunch, and listened to the kids talk. For some reason, Honor asked her big brother Brian, six, if whales have ears. Brian confidently stated, no, but then asked Dad if that was correct. Nope. They do not have big ears that stick out, but they do have ear holes. This new knowledge encouraged a flurry of questions about which animal had ears or not. It was funny that Honor kept asking Brian, and Brian would relay the question to Brad, and then Brian would send the answer back to his sister - although they were all sitting in the same room.

This got me thinking of all the things I've ended up looking up on the web, or in books, etc. I do enough wandering and wondering of my own, but now find that I have to look up details of things, for different reasons. You never stop learning, and as a parent and one of the two primary teachers of our children, I am learning to study things from alternative angles!

We also move around a lot and I like to reflect on what we see and do, and how the kids interpret the world around them.
Posted by Connie at 6:13 PM 0 comments