Last week was a not good, very bad, really icky sort of week. Not horrible, not terrible, but not good or very fun.

First of all… to reassure my friends and family, who I spoke with on Facebook last night, the doctor agrees and says this is most likely an allergy, NOT, measles, nevermind what it looks like, and nevermind the outbreak at the school:

It’s on my neck, chest, back, and arms. Not painful or itching. Just red, bumpy, and scary looking. Rawr! 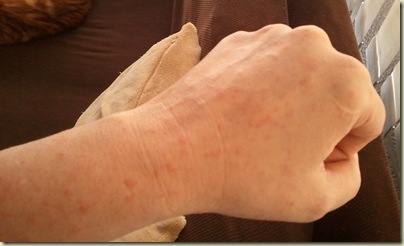 As lovely as this looks, this is really the least of what’s been after me these past 10 days or so.

I woke Friday (first day of our weekend) 25 May, with what I thought was an ear and headache.  It got worse through the day, with the pain spreading into my jaw, the side of my face, my neck, and even down into my arm. It seems that I discovered how to royally piss off my  temporomandibular joint (TMJ).  I admit that I have been very stressed lately. We are due to move this summer… and even though I really should be used to ‘the drill’ by now… there are certain aspects of moving that really get to me. My main stressor is having no dates on the calendar. No pack out, no inspection, no fly dates, etc. I can deal with all the other chaos just fine, but I want the WHENS! We’re starting to fill those in now, so I’m relaxing, but this stressor gets me every time! Anyway, I’ve been clenching my jaw too much … while awake and asleep… and it got me. It clenched back.


Have you ever had back problems with sciatica? I mean, I REALLY hope not, but if you know what I’m talking about. TMD is like sciatica in your EAR (which is why it feels like an ear infection, but it’s really that jaw joint). Severe pain in the joint, with pinching, pulling, tugging, numbing, and tingling radiating outwards from the central pain spot. By Friday night, I began to understand that I was dealing with a muscle problem, and not an ear infection, and took ibuprofen. No effect. I went to bed. No sleep. I tried cold compresses and hot compresses. After 4 hours I took more motrin. Tried to sleep. No. I tried deep breathing and meditation exercises. I tried everything that usually works with a bad back flare up, but I couldn’t even lay still due to the pain. By 530am, I gave up pacing the house, got a hot shower, and went to the emergency room.

The ER at the Arab Medical Center was great! They were really nice to me. After checking me for fever(no), and for an ear infection(no), and after an examination, the doctor pronounced ‘muscle spasm’ .. oh yea… that’s what it was alright! They also insisted on an ECG, simply because of the pain in my arm. The doctor wasn’t overly concerned, as the arm pain was on the same side of my body as the jaw and neck pain, but he wasn’t going to overlook something so important. The ECG was fine. The not so fun part was receiving an injection of muscle relaxer, and an IV of fluid/pain killer – basically, it was just tylenol, but the combo/amount given went right in and cracked that pain. I still hurt, but it relieved the extreme pull that it was doing to me. I left with a Rx for more tylenol and a muscle relaxant called Mydocalm. Both mild, but effective, and they even helped me to rest and sleep… although I had to sleep on the sofa. I read that sleeping on your back is good with TMD (keeps pressure off the jaw) and sleeping on the sofa is the only way I can do that.


Anyway, like a back spasm or sprain, it took a few days for the ‘injury’ to chill out. I admit, the first few days I was watching the clock, counting down the seconds until I could take more pain pills. They wore off too fast :(  but through the week it got better. I had no appetite though, and could barely force myself to eat something with each dose, therefore, I wasn’t really surprised to end up with an upset stomach and diarrea… yay… I was happy, at least, to not be throwing up because I figured that would really hurt my jaw! Small blessing, but I was grateful for it. It had to be the meds, messing up my stomach, right? But Wednesday night, I started freezing … really, really, bundled up in sweats and still chilled, really cold, and my husband felt ill on Thursday too. Hmm? Maybe not the meds. I didn’t get the thermometer… I was taking tylenol already, so why bother, but it was definitely fever. Fortunately, the pain was mostly gone by this point, so I just slept. A lot. I assume that an evil virus decided to come in and kick me while I was down. Typical. Viruses are bullies.

And to make it even more fun… an email arrives warning of measles in the school. Super.

Now, I’ve been vaccinated. I believe in vaccinations. The flu vaccine and I have had some issues, but I believe in that too. I gave serious consideration, back when the kids were babies, to NOT believing in vaccines, but the reality is, while there are known proven RARE real side effects to vaccines (any medicine) … and there are likewise a bunch of rumored possible RARE maybe non-proven side effects … the actual diseases we vaccinate against have a long, irrefutable, recorded-on-countless-tombstones, terrible history. These diseases are proven to be highly contagious, and often very fatal. What’s there to consider?? We vaccinate. My decision for the kids, was to vaccinate, but to spread out their injections when they were tiny. Alter the timing and do only one at a time. Their doctors were happy to do this. The only concern was that they did get the shots. I actually had one lady tell me that the reason they do so many at once was because parents often won’t make the multiple visits.

MMR is a highly effective vaccine. Efficiency is about 95-99% immunity, for LIFE. However, measles are highly infectious, and even with a vaccinated population, there is still a small percentage of vaccinated people becoming ill (about 2%). In the unvaccinated, about 85% of those people exposed to the virus will become infected with it. About 95% of those people infected with the virus will develop the illness. It just doesn’t mess around. Not being vaccinated is simply foolish… not just for you and your children.. but for everyone you breathe on, including those very vulnerable individuals who truly CANNOT be vaccinated because of REAL medical reasons (as opposed to those who are unvaccinated because they are afraid of the internet vaccine bogey monsters).

Anyway. I’ve been vaccinated. My symptoms weren’t really ‘measle’-y, and even the rash, although it looks suspicious enough that everyone put on masks when I arrived at the clinic this morning, it started on my hands, and spread from there. With measles, it usually starts in the head/neck/torso and spreads out. After doing some research, we believe that my new ‘skin art’ is due to an allergic reaction to the muscle relaxant meds I had been taking and that it should clear up in a week or so. Btw - I went in to the clinic BEFORE the embassy notice to stay home and call first went out in email!.. oops!… if I’d actually had measles, they’d have had to lock up the clinic and bleach everything down. Sorry folks! I really did not think I had anything infectious though, but in general, that is a great idea. Call first… don’t bring cooties in unless it’s really needed.

Anyway. I’m a bit tired of this nonsense and hope these coming weeks are less medically ‘entertaining’. For a refreshing change of topic…  here’s a photo of a cat sitting on a window:

I had something very similar after the big earthquake. It was caused by the stress. I was put on steroids for 10 days but it took 3 months for the rash to totally go away. The soca here in NZ don't hand out mess so I turned to wine which actually helped. Try anything you can to relax. It totally sucks and is scary but as soon as the stress subsides, hopefully the rash will too.

I had something very similar after the big earthquake. It was caused by the stress. I was put on steroids for 10 days but it took 3 months for the rash to totally go away. The soca here in NZ don't hand out mess so I turned to wine which actually helped. Try anything you can to relax. It totally sucks and is scary but as soon as the stress subsides, hopefully the rash will too.

I didn't even think of the medicine causing a rash at first. I've never had any adverse reaction to meds before so it didn't even dawn on me, despite my taking meds all week! I've been cleaning and sorting stuff for this summer's move though and so, I was going through the soaps trying to see what I might have got into?! (there was nothing new!) I need to go look at the calendar ... I HAVE dates now. I HAVE some control. Go away worry and stress! :)

Wow, that's a lot to go through in such a short period. I am sorry! Glad to hear you have dates now and hope the rash clears and the jaw feels better!

Thanks Daniela, I am feeling much better. I'm just spotty! :)

Bless your heart!! I'm glad it's getting better and I pray a speedy total recovery for you!

Thanks Betty... I'm getting there, but am so looking forward to the weekend. I want to SLEEP ;D

Holy cow!!! Hope you are starting to feel better!

YAY! NO MEASLES!! Spots - not so yay. Hope you are feeling much better soon and spot free. You need to follow the kitty's advice and find a nice window to nap in.