We recently learned more about our well. We didn't learn about it the easy way either, but it really wasn't as bad as it might have been.

It started when the pump - down in the basement - wouldn't shut off. I wandered around the house and couldn't find anything, but thought we might have water running somewhere. I was assuming a toilet tank that was leaking and needed a new gasket. I'm still not walking up and down stairs confidently, so I waited for Brad to get home and check it out. That wasn't the problem. We found a big puddle in the back yard. Uh-oh.

In the morning, we called our usual plumber - they also do well and septic! - and they said that as we had water in the house and the pump still had water going through it, we'd be alright (ie. not burn out the pump) and the soonest they could get to us was early the next morning. They showed up bright and early and looked things over. That's when we found the new 'water feature' in the back yard. 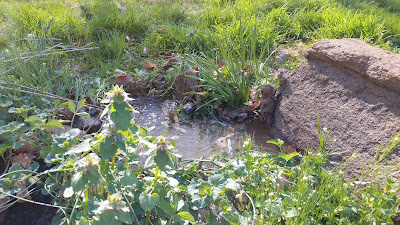 This was a job that called for excavating. They made a bunch of calls and, having other customers with emergencies going on, told us they'd have a machine delivered to the house and perhaps they'd be able to get to work first thing the next day. Well, maybe an hour later, I look out the window and see this... 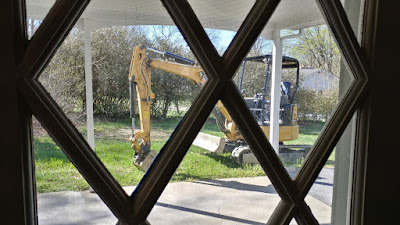 And not long afterwards, the work van was back as well. In case the photo doesn't show up, that's Zepp Plumbing and Heating, Inc. We recommend them! 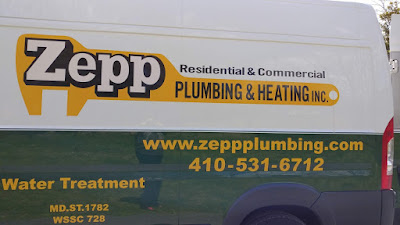 Even with the digger and all, they still had to coordinate the work to be done (and fit in issues going on with other customers too) but they stayed, called for representatives from the utilities companies to come out and mark our power and cable lines, and got right to work. 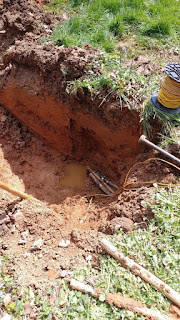 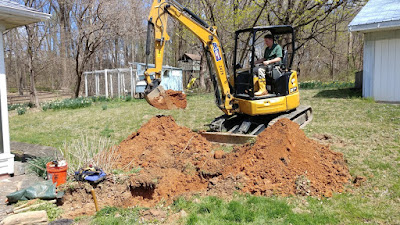 It didn't take long for the well cap to be exposed and the cracked pipe found - a plastic elbow. It was a surprise to us because we believed the well was much further away from the house, not right out by the back walk. They got the pipe fixed right away. We also learned that a buried well was not up to code (it was dug in 1960) and new code requires the well cap to extend at least 8" above the surface to protect against ground water contamination. While the ground was already opened up, we decided to go ahead and bring it up to code. Only certified workers are allowed to work on welding on well systems but fortunately Zepp Plumbing knows a guy and they were able to come out the very next day to extend the casing. 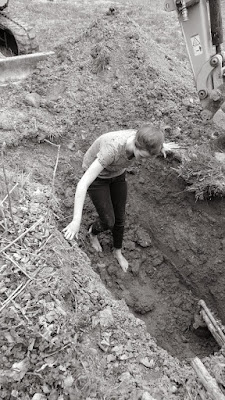 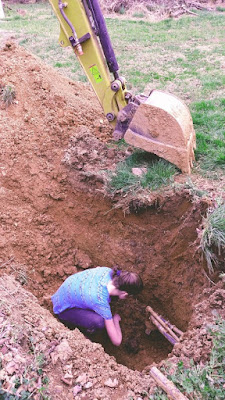 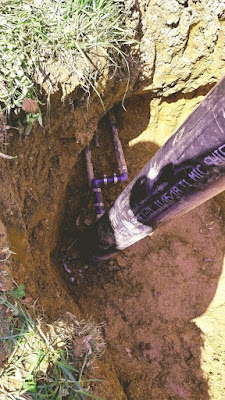 We now have a capped pipe out behind the house and a perfectly repaired well system. Found out that the well is 80ft deep and the water line is about 13ft below the surface. We've had to wait a week to drink the water again - due to the addition of chlorine to cleanse the well after repairs - but have been able to use the water for washing and showering etc. When I saw the water bubbling up from the ground I thought we were in for a terrible ordeal, but it really wasn't all that bad, and I found the experience interesting and educational too.

We have some nice rocks surrounding the well pipe, but decided it needed some flowers too. 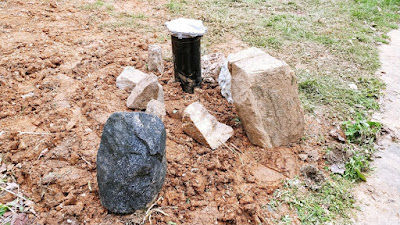 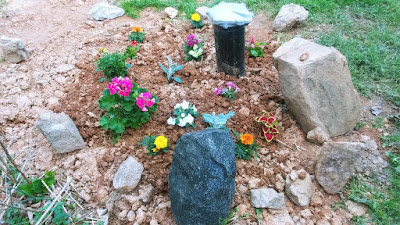 Honor and I put the plants in. This was actually a pretty big accomplishment for me. Getting up and down from a low chair on uneven ground was a test of my 'repaired' leg. Honor had to bring me my cane at one point, but I'm getting better! We chose a random assortment of bedding plants as we have no idea what will thrive in our soil and we'll see how these do.

The large greenish-black rock was Honor's "Birthday Boulder" from 3(?) years ago. We'd asked her what she wanted for her birthday, and jokingly, she said she wanted a boulder. So, Brad and I got the wheelbarrow and went back up into the back 1/2 acre and dug up this big rock to present to her. We told her it was just a baby boulder but with love and attention it will grow big and strong. When we were moving it around to set it back in place, Brad said that it might be slightly heavier now.

Speaking of flowers, our lawn has been full of wild flowers this year! Pretty little 'weeds' all over the yard. 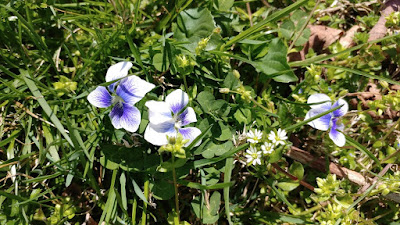 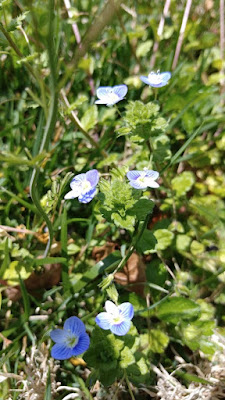 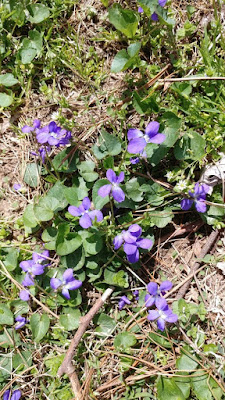 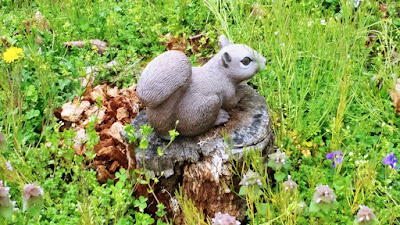 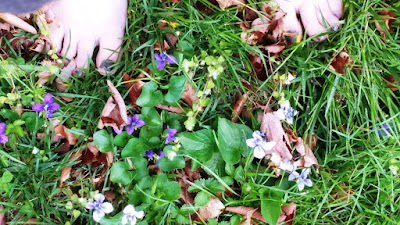 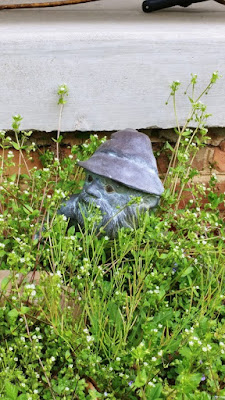 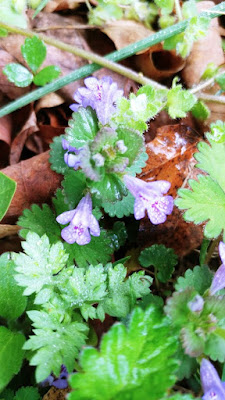 Rather than a random cat photo to wrap things up, how about a random chicken?