Brian and the Birthday Dragon

Last summer, I found instructions for creating a dragon cake that looked easy enough for even me to manage - I do not usually do well with fancy cake decorating! Brian has LOVED dragons since he was a tiny thing - appropriate as his Chinese horoscope states that he was born in the Year, Day and Hour of the Dragon. We thought we'd give this cake a try. (I had a emergency spare cake mix in reserve.) 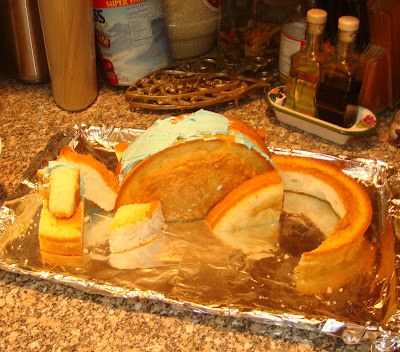 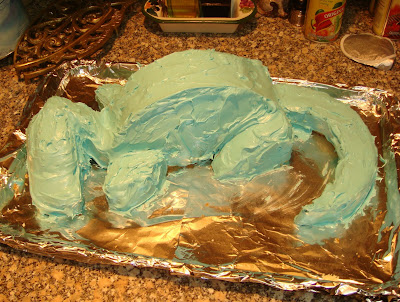 If you've checked out the website with the recipe, you will notice that despite a lack of confidence in my own baking skills, I immediately deviated from the instructions. Brad says that it is impossible for me to follow a recipe, step-by-step. He may be right.

Brian wanted a blue, not a green, dragon - that sounded reasonable. I did not like the shape of the neck and head. So I shortened the tail, and used the extra cake pieces to shape a more dragonly skull. Oh, and used lots of blue! We didn't like some of the candies called for as decoration, and we didn't have chocolate covered graham crackers for the back ridge, so, Andes candy mints made the ridges, star-shaped red marshmallows with a bit of red frosting made the eyes, and rather than those strange 'candy orange jelly slices' as claws, we used red skittles. Purple skittles made nice nostrils, and a bit of red licorice made the dragon smile... and that made the kids smile. 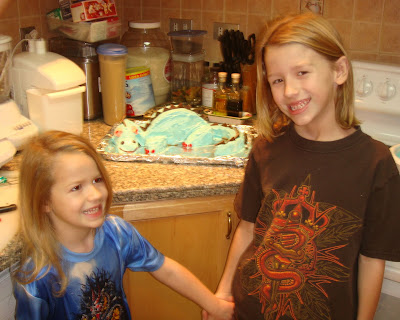 The instructions called for fruit roll-up wings using skewers - but warned that the weight of the wings could cause them to droop. I used chopsticks instead, with the thicker end pushed into the cake to provide a better anchor.. they didn't droop at all. 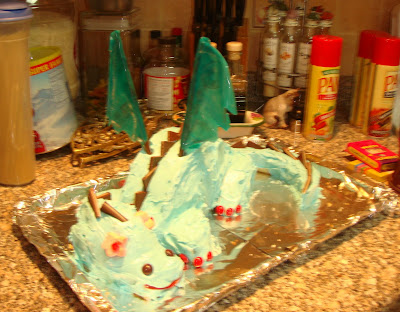 Brian shares his birthday with our co-worker's daughter, and he and Eliza shared a party at our apartment. Eliza's mom brought over pink castle cupcakes! It is too bad that we weren't more organized, and did not decorate and accessorize more in theme with our baking. At one point in the day though, in keeping with the spirit of things, the boys, armed with swords and shields, got into a battle with the girls, armed with tiaras and wands.. unfortunately though, I was not armed with my camera to capture that silly moment.

We did get a good shot of the birthday kids after they successfully blew out the candles on the flaming fire-breathing birthday cake - thereby dooming the castles the dragon had guarded, to a swift and decisive plundering by all the knights and fairy princesses in attendance. The dragon was quickly devoured too - how often do you get to 'carve' a birthday cake with kids asking for 'a leg', or a 'tail', or 'white meat or dark'.. and the 'wing meat' was such a hit that we had to go back to the pantry later for the rest of the box of fruit roll-ups! 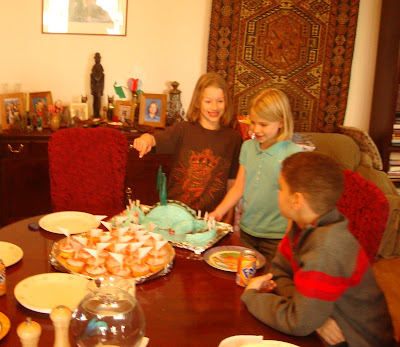 As you can see, Brian was thrilled with the Battleship game and Legos that Grandma and Grandpa sent... looks like his friends were too... Thank you!! 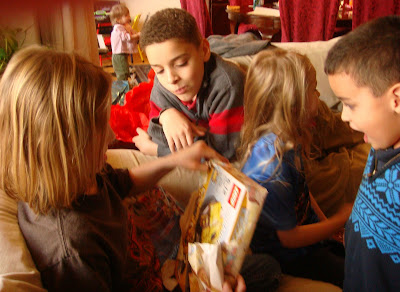 Happy Birthday Brian and Eliza!
Posted by Connie at 10:34 PM

Sounds like so much fun! Dragons and knights and princesses with wands!

Thanks Danie!! I try, but I can only pretend to walk the path you have paved with gold :) I love to see the creations you post about it.