You know what to do with lemons...

.. but what if life, or your weekly veggie delivery, hands you 5 smallish citrus fruits of indeterminate color that may be yellowish limes, but might also be greenish lemons? I have asked and been told they are "limuns", and have also been told by some that this means "lemon" and by some others that this means "lime". Who knows? Anyway. Given mystery citrus - did I make lemonade? No way. I was sure that this was a situation that called for making something that may or may not be an Egyptian variation of Key Lime Pie, a favorite dessert from my native Florida.

And why, as a native Floridian, do I not have a complete encyclopedia of all the details of all the citrus fruits, of every variety and species, engraved upon my brain? Well, I never bothered. Sorry. There's so much! And I really do not care. I like it all. Orange-like objects. Grapefruit of all kinds. Lemons, limes, tangerines, etc. I don't care. It's good and good for you. Why worry about the details? So, when I started getting these little greenish-yellow, lime-like objects locally, that were sometimes yellow like lemons, sometimes dark green... no bells rang. No light bulb appeared. I just stacked them on the counter with the rest of the citrus and used them as lemons or limes in whatever random use I happened to come up with.

Then there was today's pie. I chose this simple Key Lime Pie recipe (same link as in the first paragraph) because I like key lime pie... but I did so knowing that you really do not get key lime pie (link to pie history), if you do not use real key lime juice. You don't. It's not the same. It might be very good lime pie, but it isn't key lime pie. And what is the difference between key limes and regular ol' green limes, anyway? Basically the regular lime, the Persian, is sweeter, has a thicker and softer skin, and is less acidic. It is the very familiar green oval fruit found in most US supermarkets. Key limes are what I also knew as 'wild limes' in Florida. I remember them being small, harder, much tarter, and very yellow limes. Anyway, what happened when I made the recipe with my mysterious local citrus? When we tasted it.... it was key lime pie. I kid you not... How?!

I had to find out, so I started researching limes and found out that the local Egyptian fruit makes authentic tasting key lime pie, because it IS basically, key lime! Both are (C. aurantifolia) - they are the same variety of lime.

-- Key lime, West Indian lime, Mexican lime, kaghzi nimbu (India), Gallego lime (Brazil), limun baladi (Egypt), doc (Morocco), shirazi (Iran) (C. aurantifolia) is a variety that is referred to as the true lime. It was brought to the Americas from Asia by the Portuguese and Spanish explorers in the early 16th century and cultivated as early as 1889 in the Florida Keys. It grows well in all of the citrus-growing regions: hot semitropical, subtropical, and tropical regions, and particularly flourishes in the Caribbean and Florida. It is round to oval, very small, and harvested year round. They are so small that often as many as sixteen will make a pound (500 grams). Key emits an extremely distinctive aroma from its thin green rind, and it is quite juicy with some seeds and an acidy taste. Like the lemon, the lime became abundant in the New World soon after its introduction, particularly in the West Indies and Central America.

Ok. Sure. I bet there are some minor differences due to evolution, and to the effects on the different plants in widely varying climates, etc. but this Egyptian Lime pie took my taste buds around the world and back in time. Mmm! 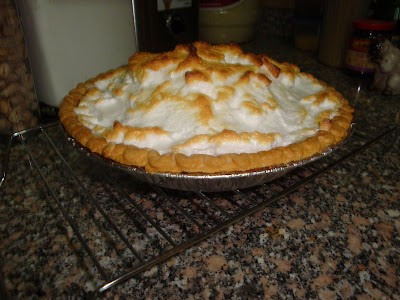 It was a pretty pie, and very yummy. After thinking about it, I believe I should have used a graham cracker crust... I generally am not fond of any pie crust, but graham cracker is good with this type of pie.

Connie, that looks AMAZING!!! I can almost taste that perfect crust through the computer...

Wow. That looks amazing, particularly from someone who never bakes. :D Did you actually make that pie crust? I usually do an oil crust, which is basically oil, flour and a bit of salt, because I STILL have not mastered the art of pie crust makings. Shhhh, don`t tell my Gourmet Mama readers!

We only get key limes here . . . lemons don`t exist. They call the limes "limones" though and if you ever want to get into an endless roundabout discussion with a Guatemalan, start disputing the fact that limones or lemons are green. I swear, you can go for hours without a resolution.

alas! :D I cannot take credit for the crust... beyond the obvious fact that I managed not to burn it while pre-baking or throughout the rest of the pie-making process! (which is a good thing) It was a pre-made frozen crust, and I didn't kill it.

I didn't think to mention it because I don't usually like pie crust. Crusts are the 'peel' which you scrape off in order to get to the real pie, the filling. Home made, store bought, frozen, whatever. Doesn't matter if it's a meat pie, fruit, or sweet pie. I don't get it, and yes, I probably am missing out, but it's the truth. I can still appreciate a beautiful, flakey, ornate crust though, and have opinions about which crust is better for what kind of pie... but I'm still likely to treat it like barely edible packaging. Something to hold the parts that I actually consider to be pie!

If I should try this again sometime with a graham cracker crust, I'll try to remember to accurately report my crust source :)

Expat mom - limones and limuns! I actually found reading up on limes to be very interesting and educational. I learned that, when pickled (ew) they were a favorite snack for US school children in the early 1900's. And on a more practical note, as they lose their moisture so fast because of the very thin skin - and do not keep in the fridge - I read that you can store them in a closed jar of water at room temperature and they'll keep longer. I also read that they can be picked green or yellow, although they turn orange-ish between the two stages! Now I want a lime tree so I can see for myself :)

I made lemon tarts for Easter and my meringue did not look nearly at good as yours. I'd love your recipe and whatever tips you're willing to share!

The recipe was linked, but I realize I went a little crazy with the linking - I found the lime history and heritage to be interesting for some reason! Here ya go: Key Lime Pie Recipe

oh... and to be completely honest (I will not repeat the crust deception) I could not follow the recipe exactly. I didn't have a double boiler to make the meringue, or a candy thermometer that would read 110F. I mean it when I say I do not do desserts! I used a metal mixing bowl placed in a saucepan of boiling water, and just guessed on the temperature using a meat thermometer with a gauge that started at 130F.

I'm with LiLu. Your pie is making me salivate as I type this.

Oh, and I would never say that you don't give us something EVERY time I read your blog. It is why I love it so. :)

yummie!! I remember key lime pie from when I went to florida to see the other half of my family (in the tampa bay area) Your pie looks absolutly delish! Good on ya!!

We have the green thin skinned limes here too ... must be the tropical climate.
In Thailand they make great daiquiris with lime (yummy!); adding a squeeze to cold water is the next best thing, well sort of when you can't have daiquiris ;-)
Squeezing them and freezing them in ice block trays (once frozen you can pop out into a suitably sized container too) ensures you always have some on hand ...

yummy, yummy, yummy. it's funny, we don't even have lemons in costa rica. they are all limes here!!!!!
The Travel Expert(a) and an Expat with a Twist