Things that go whap! in the night. 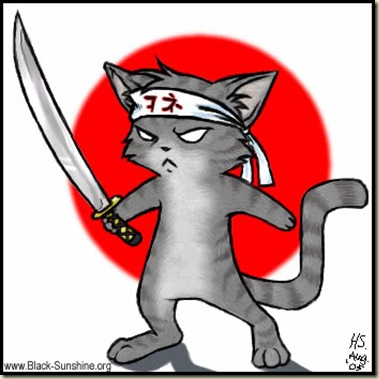 Ah. The kittens are so cute and innocent looking when they are asleep. Pixie is curled on top of one chair, Pumpkin is flopped along the back of mine. Half on the chair back, half slid down and resting on my shoulder. If I get up, he will roll off onto the seat, although It would be rather hard for me to get up as Ninja is on my lap, between my belly and laptop desk, also snoozing peacefully. She is still the littlest, and such a sweet baby. She loves to gaze into my eyes and have her faced rubbed. But don’t be fooled, she earned her name, and is always training for combat, or possible pirate invasions.
Anyway, the kittens should be exhausted. They got up early and played hard for nearly two hours this morning. Chasing each other, attacking feet from under the beds (and other means of distracting kids from preparing for school), abusing the laundry baskets, arguing over bits of paper, and helping Brad to tie, untie, tie, untie, tie, untie (etc.) his shoes for work. Soon, one will wake up, and if one is awake, he or she will ensure that all are awake and the mayhem will start anew, but for now, they are tired little angels.
The kittens usually sleep well during the night, which is good for allowing the people in the house to sleep too, but last night they woke up around 2am for some reason. And for some other reason (only known to the felines) they thought that the perfect place to play would be our bed. Usually only Pixie sleeps with us, but all three kittens joined her for this rompfest wrestlemania assault. Up and down the bed. Leaping over body parts, or bouncing off whatever was available to gain momentum. Wrangling with a sibling, a foot, or fold of blanket. And let’s not forget the high-speed chases… you would think that there’d only be so far that three high-energy kittens could race on an occupied queen size bed before they got bored and ran off into the house, but you’d be wrong. We did our best to ignore them – but at one point, I felt the three of them romp up the center of the bed, past my pillow, and at least one go over the head of the bed, between the headboard and the mattress. I made the mistake of opening my eyes. There was Ninja, right in front of my face, in full attack mode. Faster than I could blink - she turned her assault from her brother, to me, and Whap! Whap! Whap! – triple kitten karate chops right on my nose! and then with a silent bound, she was gone! 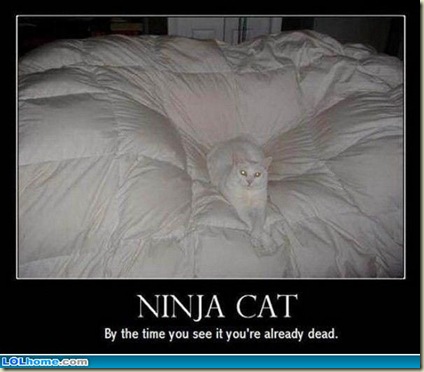 (Images were saved from emails and I’ve had stashed for awhile – I am not sure who to credit, but I’m borrowing, not trying to steal.)
Posted by Connie at 7:06 PM

How funny and frustrating at the same time! I'd be screaming at them and throwing them out into the living room and slamming my bedroom door. I can sympathize, the puppy was the same way for weeks. Every time we took him to to potty he would be so wired up and want to play. It was worse than having a baby!

I could use some kittens (or my own big puppy) here today. It is freezing! I love their names!