Halloween has been a ton of fun this year. With the kids getting older, I worried that they' might start getting bored with goofy holiday events, but I suppose that it’s less about what you do, than who you do it with, and we’ve had a fun Halloween!

The kids’ school held their annual holiday fair/fund raiser. I didn’t get any good photos from that. The lighting was too weird for my camera. On Halloween day, the kids’ classes also held parties and the school had a costume parade.

Brian is my assassin, and his little sister is showing her feline side (more than usual). 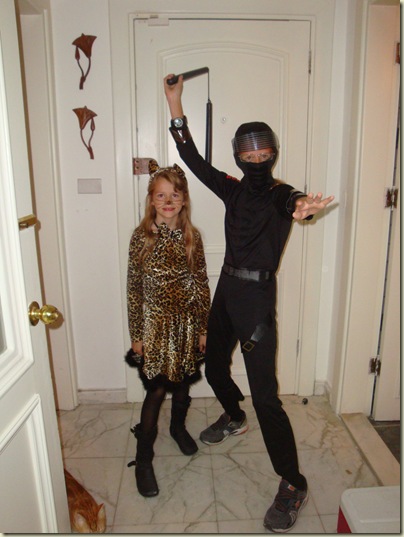 On Saturday, a friend and I co-hosted a big Halloween party in my home.

The kids helped me decorate. Honor decorated a prize box, with help from Pumpkin. 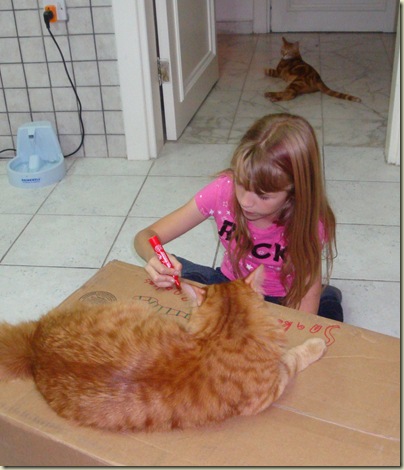 The prizes were snakes, so Honor, and eventually Brian too, drew snakes all over the box for me. I cut a small hole in the top, and when kids won their prize at the party, they had to stick their arm in and find a snake! The night before the party, the snakes kept escaping. I was finding them, 2-3 at a time, running around the living room. Pretty frisky for plush animals. (This unusual activity might have had something to do with the cats that I kept finding in the snake box…) 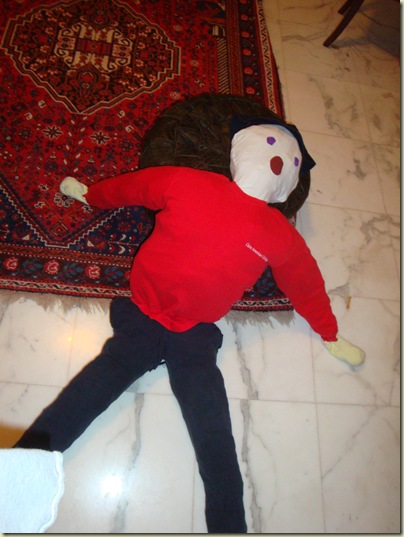 I’m not sure why we needed a Fred, but it was a fun project, and we propped him up between the front door and security bars as if he were in jail. We also propped up a skeleton on the other side of the door… as, according to Honor, a warning to Fred of what might happen if he didn’t behave.

On party day, we had one table set up for food, and another table for crafts. 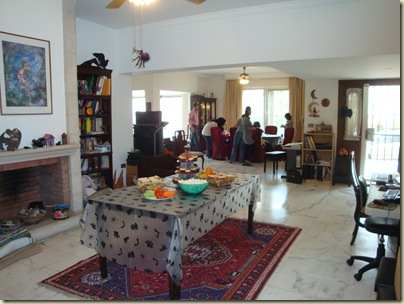 I didn’t see much of this though, as we also had kids’ games going on in the back garden and that’s where I spent most of the day.

Pin the grin on the skeleton… 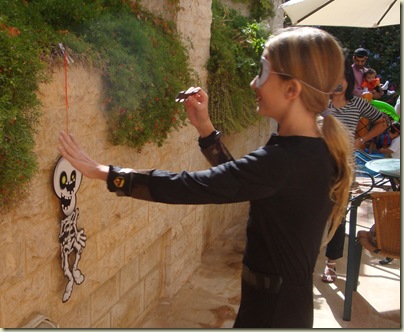 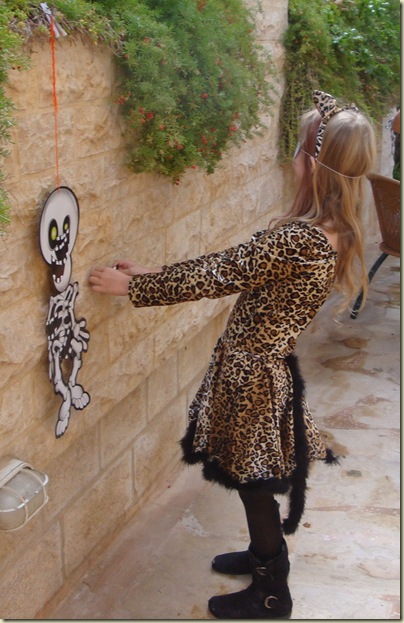 And snakes in the pumpkin patch… 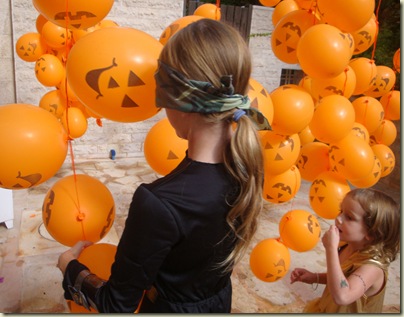 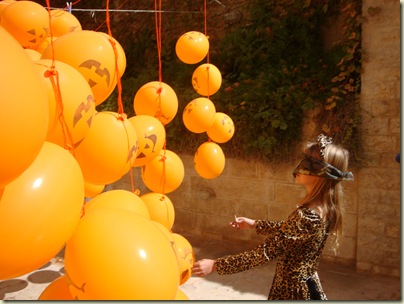 The snakes in the pumpkin patch game involved balloons that had slips of paper inside. If the kid popped a balloon with a snake coupon, they won a snake prize, if they got a bat, ghost, witch, or cat, they had to go to the end of the line. They couldn’t see the papers, but blindfolding them anyway made it a bit more fun. At the start of the game, only the bigger kids were brave enough to give this a go, but as they won their snakes and the little ones had time to watch and learn, even the tiniest was willing to grab a toothpick and go pop a balloon!

When I ordered these snakes, for some reason I thought they’d be very small. Perhaps a foot long and skinny like a pencil. I checked the website later and sure enough, it said 42”, but I completely missed that! They looked small in the photo. It must have been a case of my ‘seeing’ what I was looking for as I had thought of putting the toys inside the balloons. Ha! Imagine my surprise when they arrived in the mail. These things were NOT going in the balloons! Not even close! But they were a big hit! 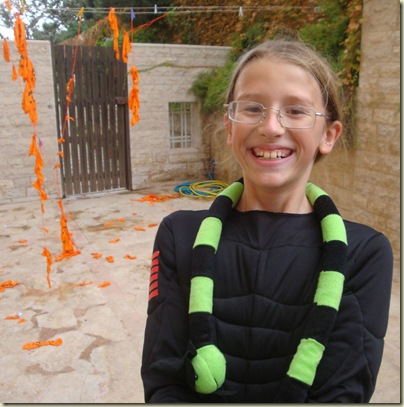 The apples were more ‘played with’ than ‘dunked for’, but we had a bunch of little kids attend and keeping the tots happily playing was much more important than keeping them in line with those pesky rules and traditions. Some of the bigger kids dunked. We had some soggy children, but fortunately the day turned out warm after a morning of slightly chilly rain. 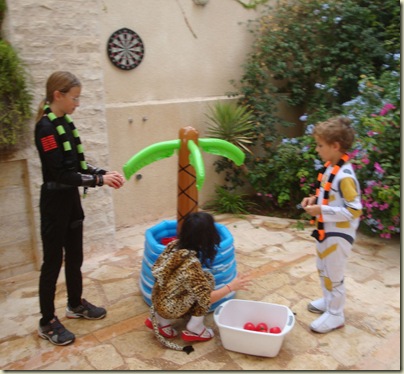 Let’s see, we also had a pinata. I was a little worried about this, as we had 10 or so kids big enough to play, meaning, about 10 kids who could play well. The littler ones played too, but they did not hit as hard as the big ones! Sometimes a pinata will bust open after only a few good whacks, leaving many kids without a turn up to bat. Fortunately, we got a tough one and each kid had several turns abusing the poor thing – bits of candy being knocked out here and there - until it was swatted off its rope for the third time (I think?) and I declared it dead enough, and split it open the rest of the way. 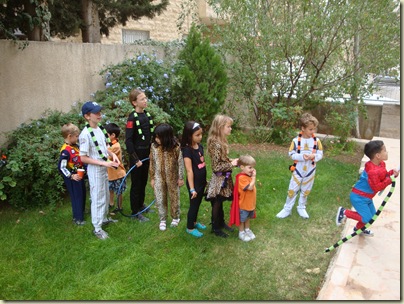 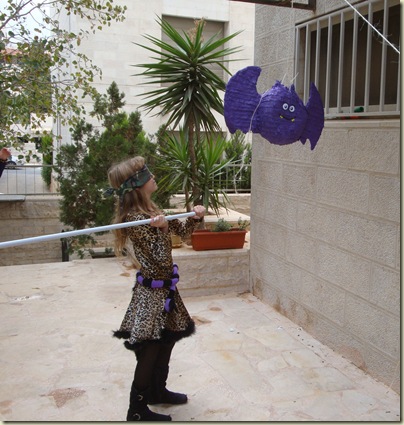 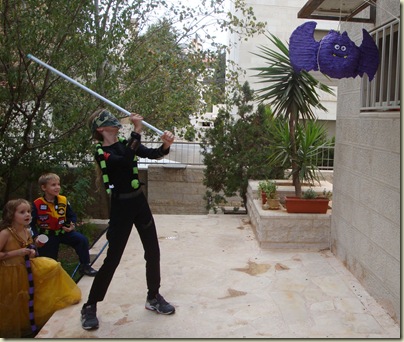 You might see some familiar kids in these photos as Donna and her family were able to join us, hooray!, but I focused this blog post on my own kids … even though the other kids were very, very hard to resist! We had a houseful of wonderfully costumed kids! Hmm? What is the etiquette regarding blogging about another blogger’s kids and potential blog fodder anyway?! 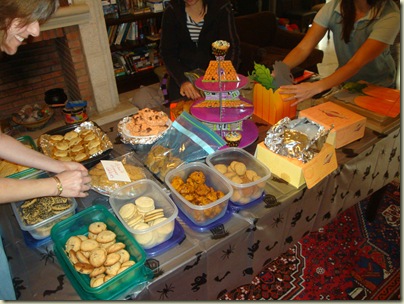 Oh! Such wonderful bakers! So many good cookies… seriously… so many(!) that instead of the cookies being carefully split between each family, we just gave everyone, including the bigger kids, a box and turned them loose. This was my co-host’s idea and a very good one too.

After the party, when I was already frazzled and tired (in a good way!)  Honor took my picture. She told me to smile, and I was in process of leaning in to make a funny face at her when she snapped the photo… which meant my hair was in my face, etc… but I think the photo turned out silly… which is absolutely the proper spirit of the day! 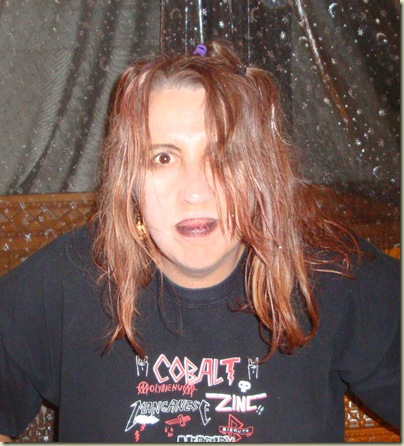 Most of my make-up had faded, but I was supposed to be something of a ghastly ‘heavy metal’ rock fiend. (I was keeping it simple because I knew the party would be busy). I got a turn with the camera too, and here’s my little kitty. 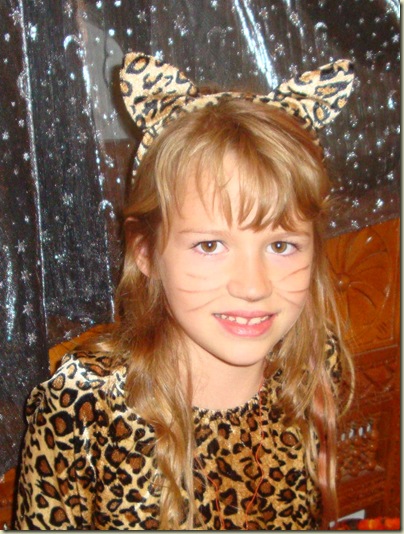 Even with her nose and whiskers faded away from play, she’s still a cutie! (No, I didn’t get photos of the guys, they weren’t interested!)

I mentioned on Facebook, but I’ll repeat it here, I had two lessons learned from this. Next time, when inviting a bunch of very small kids (we had some tiny ones, 2-3yo) I should leave more toys lying around. Also, I need to wash the screens. Maybe not all of them (this is a land of not much water, so we don’t waste, and it is naturally dusty!), but at least the door between the kids and the cats should be cleaned! We locked the cats away from the party… not so much because I thought they’d be afraid, but because the doors were going to be open and I didn’t want them getting outside. I left the inner patio door to our bedroom open, and Ninja had many little visitors leaning in to talk to her through the barred, screened door… at least now the bottom half of that screen has been wiped clean ;P !  And yes, Ninja was very sad to be left out of the party fun. She cried. A lot. After most of the guests had left, we opened the door and let her out. Pixie and Pumpkin were content to stay hidden, but Ninja was out and snuggling on the couch with Honor and the daughter of our co-host… finally!

Honor wrote me a note Saturday night, telling me that the party was ‘a blast!’ and ‘can we have another one, PLEASE?!’. By morning, both kids were trying to talk me into a Christmas party. I take that as a reliable indicator that they had a good time!

Enough celebrating yet? Nope. On Halloween night, we attended the haunted house and trick-or-treat event at the Embassy. We didn’t stay for the costume contest or buffet. Kids had homework and things they wanted to do at home. It was done well though and we appreciate the efforts of the folks at the Embassy who worked hard to set this event up for the kids.

Hope you all had a very Happy Halloween!! We definitely did!

that looks amazing! congrats on pulling it off! your kids' costumes are great!

Thanks! I'm just happy that we managed to get it all together. My friend and I have completely different schedules and hardly ever see each other... planning was rather haphazard, but it worked, and that's what counts!

What a fabulous party! I am glad it went well.
I live the costumes, and think your picture is awesome.
Happy Halloween!

Thank Emily! Hope you had a very Happy Halloween too.

Wow, sounds like you all had a great time! I love seeing all of the pictures too. Halloween used to be my most favorite holiday and I like it still but with 3 kids it's exhausting!!! I was glad when it was over :)

Connie, your party looked amazing! Glad you all had a fun Halloween! I've linked to your blog on the weekly roundup. Have a great weekend!

Wow, as always, you can host a killer party! And I *seriously* need to have a cookie exchange. I don't bake much & that would be an easy way to try a bunch of different cookies w/o having to make 10 unique recipes!

i like halloween,but I live in Russia and it isnt our holiday:(

Man, this looks like every one had a fantastic time!