I’ll continue my weather rantings from yesterday… Why? Um?.. because it’s the most interesting weather we’ve had in awhile, that’s why. You folks who are, and have been, dealing with more extreme weather won’t appreciate this, but our temps were highs in the upper 70’s, lows in the upper 50’s until, what? Last week? It’s practically mid December and the kids are looking at me in desperation. WHERE is that snowfall? Jordan PROMISED snow! They heard, before we moved here, that we were supposed to get at least one good snow a year and so far they’ve been very disappointed… and it’s almost Christmas!

Instead, we got sand. Lots and lots of sand. The Middle East has been hit hard by very severe weather over the past 48hours plus. The sandstorms we had yesterday continued all day and through the night. Facilities had delivered a new table top to replace the smashed one, (FAST! Thanks guys!) but I’m glad we kept it inside! Around 1am, after I’d just put myself to bed a little later than appropriate, I started hearing huge gusts of wind moving things around on the patio again. Weather Underground said we were getting 39mph gusts about then… I believe it. I was worried about the umbrella. It was on the ground, against the sheltered wall (out of the wind path) and under several chairs, but it was noisy out there. I went out and saw that the umbrella was ok, the other chairs were also still against the wall, but the skeletal frame of the table was being blown sideways! If we’d put the new glass out there it would have flown away like a kite! (well, until it hit the first obstacle… )

As I was outside checking on things… the wind started to sting. Sleet. A slightly painful change from blowing sand… but how neat to feel bits of ice in my eyelashes again! Apparently the wet stuff continued for most of the night, until 4am, when, iaw. the weather history, there was actually snow. Not sure if I should count that as ‘our weather’ though, as we didn’t see it. A text message from the school woke me slightly ahead of my 6am alarm and advised of a one hour delay, I went to the window and saw that the ground was all white. I considered waking the kids, but they’d been so tired last night. I figured that most of it would still be there in an hour. I was right. Not much, but this is official winter accumulation in my book, and for the incredibly warm weather we’ve been having recently, I am actually very surprised we had even this much stick! 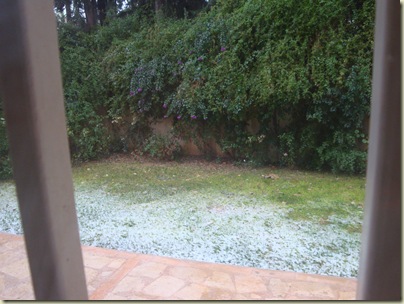 Even more surprising was all this… especially as it never quit raining this morning. I’d have thought it would have all washed away by 8am! 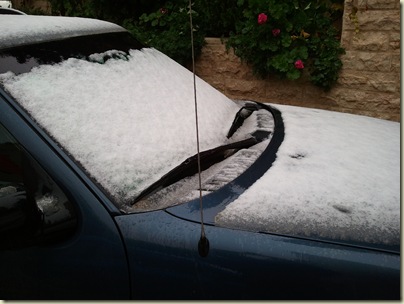 Not sure if you can see the orange mud in corners of the slush here… it was rather slimy. Nonetheless, after squeegee-ing off the ice, our truck was… at least until Brad got it out to the road, I assume…  probably the cleanest it’s been in days!

The kids were tickled to finally see snow (even if it was snow/slush-ish, sorta-almost-ice and/or sleet accumulation.. and not really ‘snow’!). 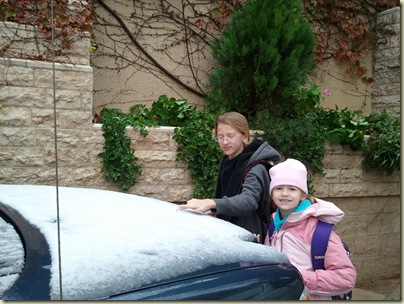 Of course, they had to write in it, and while I’d like to keep up the illusion that my little sweeties wrote Honor (heart) Brian because they’re such awesome siblings, the truth is, Brian wrote “Brian (star)” and Honor wrote “Honor (heart) Mom” … but they really are awesome siblings anyway. 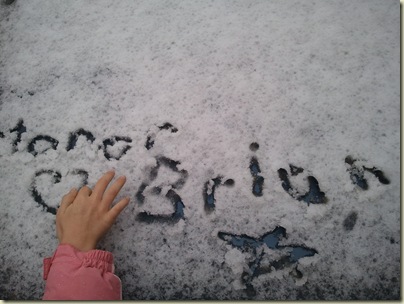 Anyway, it was still raining quite well, and windy, this morning. I was glad I took my giant umbrella out to the bus stop. Brian decided that maybe mom does, sometimes, know what she is talking about and asked for the hat I’d carried out for him as well, the hat that he insisted he wouldn’t need. The bus came and the kids went off to school.

Brian had finished his Pizarro report last night (the poster, there will be more) and had to carry it in this messy weather. Fortunately it wasn’t a MASSIVE poster and we devised a double-plastic bag carry method that should keep it dry. He was proud of his work, and I was too. He really put a lot of time and effort into his research. 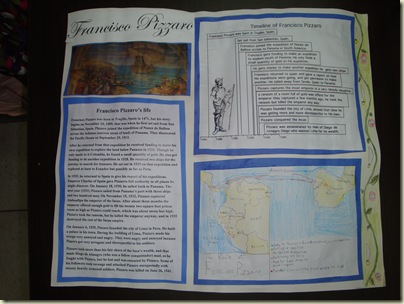 Later, we realized that we’d forgotten to send in school photo forms and money, but so had our neighbor, and he ran ours in too. I think today is working out alright.

It’s now 10:30am, still windy, still 40F (with 33F windchill) and the weather is now …. fog. Well, that’s new… I’m planning to stay inside today. As a matter of fact, I’m going to go have a nice hot shower, and perhaps another cup of coffee. My neighbor joked about everyone freaking out about the “snow!”, but I get it. This is like Florida winter weather. The temps do not get extreme, but the wind and wet make the moderate cold … BITE! Hmm? Maybe I’ll bake some cookies and get out my crochet too. It’s a day to stay cozy!

Sand, then wind, then rain, then snow? You have 4 seasons there too!

Sounds like you're enjoying your nice day there ... oh how I love the cold weather - the one thing I totally missed living our overseas posts.

nice , we dont have snow in la but we do have rain. well merry christmas i love u all
RACHEL

It's Friday and that means the weekly Blog Round-Up is here, and you're on it:

If you'd like me to remove the link, let me know.

Wow, that's quite the combination! I'm glad your kids got to enjoy a bit of snow, at least. :) My boys can't wait to get to Canada and see snow. I could wait, myself.

Jill - 4 seasons ;) I guess that's one way to look at it! I like a little bit of cold weather too. Makes me appreciate the hot weather more when it returns.

Rachel - You'll have to tell us more about your new home! I can't wait! Love and miss you too.

Nomads - sorry I didn't submit and you had to come looking, how'd it get to be Friday already???

Expat Mom - I am so looking forward to hearing about your boys' take on Canada and snow! They will have a grand adventure, I am sure!!