Despite the fact that our cats will fuss and wrestle and fight at times, and have they their moments of sibling jealously, they really do love each other. Yea… busted being sweet… 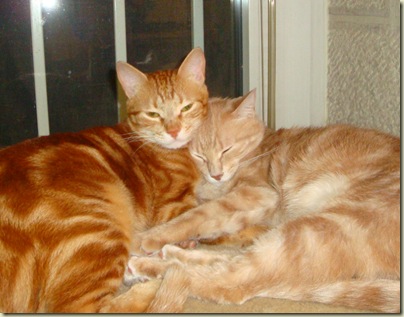 Speaking of being busted… we had an incident with a small Siamese cat peeping in our windows, trying to get inside the house, and yowling at us for attention. Our cats really wanted nothing to do with her, but this little cat was starving, and desperate for someone to love! I don’t ever feed feral cats, but there was something about this one that made me think it had been a pet, but got lost or was abandoned. Our vet supplied a trap and offered to help find her a home.

All I had to bait the trap with was cat kibble. I hoped the Siamese would go for it quickly, but we caught other cats instead. A large adult cat checked it out during the day, but scooted away in fear. It came back when it was dark and got caught. When I opened the cage door, it ran like crazy and did not come back. A small cat (maybe 4-6 months) trapped itself 5-6 times. It was terrified of us, so I think it may be too wild to tame, but it didn’t mind coming back to the scary trap and people in order to get more cereal. I was wondering where our target was, as I released the young cat and reset the trap for the umpteenth time, when I heard a happy, questioning meow behind me. It was the Siamese running up to me, thrilled to have me outside. I started to go inside, hoping it would find the food in the trap, but it had seen the small cat, maybe the larger cat too, and was afraid… it dashed under a ledge. So I stayed outside and talked it into coming over and checking out the trap. It was very clever. It was ok with rubbing against the outside of the cage, but knew not to trust the inside. It stretched in as far as it could, over the trip plate(!), and batted some cereal out, then hopped out to eat. Smart! I gave up trying to get her in the trap that night, put out a bowl of water for her (all the cereal made her very thirsty!) and went in.

Anyway, by morning, she was really hungry. Too hungry to be careful. She’d been crying at us through the bars of an open back window when we woke up, but when we looked out at the trap later, found that she’d gone around to the side and got herself caught.  Not a very happy cat! But she wasn’t totally freaking out like the other two had. 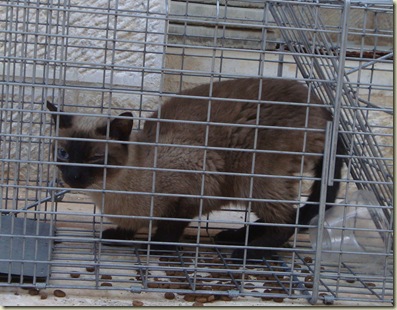 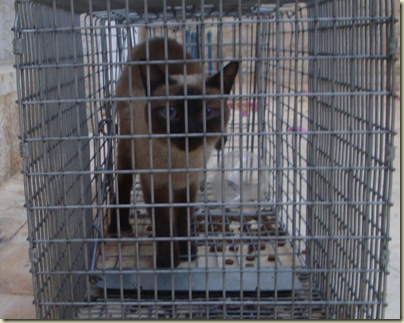 I got her to the vet asap and they took her in, bathed her, checked her out and gave her meds. Last I heard, she has a new family! She definitely wanted one! If we had room/ability – and most importantly, if our other cats had liked her (NO! They do NOT like outside cats!) – we would have kept her, she was that cute, but we are very, very happy that she found another family.

She probably would have enjoyed TV time with the kids like our cats do. Ninja demonstrates: 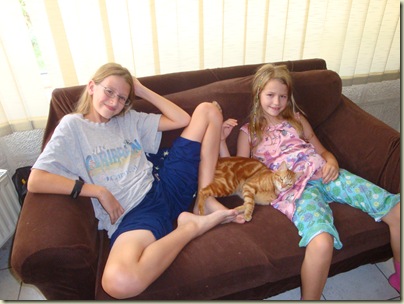 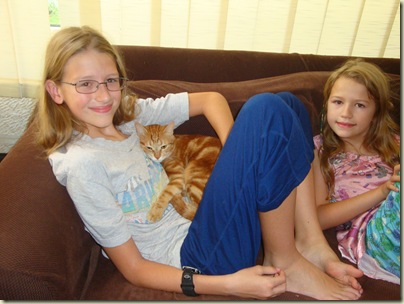 I love your 'cat' posts. Our lovely cat came with us to Bangladesh, and we love having her. She has taken to scratching embassy furniture (which she has never scratched anything before). I bought those claw caps for her nails, in the most pretty purple color and my princess cat loves them. The package said it would take a few weeks for the cat to get use to them and we would have to re-apply them many times. OH no, not our princess. She licked them for two mins, then must have realized the wonderful fashion statement they made. She stretched out her claws and starred at them in admiration. She comes and shows them to us everyday, as if to say, aren't I pretty?! Goofy Cat.

Corinna - I do love that story! I have heard of those claw caps and it is awesome to hear that your cat likes her fashion accessories! I can see that. Cats are smart and do seem to have favorite colors. (I'd have to get pink for Ninja, even if it would clash with her red fur ;D !) Our cats scratch the rugs - the indestructible, made from recycled army tanks, infamously onion colored ones - and we cover our furniture, but when we first got the kittens, I had read up on those caps, just in case. I hope they are a little older, and perhaps a bit more chilled out(?!), if we ever do need to use them... not sure if I could apply them now!

Your cats are so cute!!! I posted a post on my blog if you want to see it!!

Thanks Rachel! They are sweet cats :) I'm popping over to your blog right now!

I love your posts. I came across your blog I think through the Reed family's blog a long time ago and check in every once in a while. I have 9 cats at home all rescues and all spayed or neutered, so love reading about your cats. My husband built me a big enclosed area for the cats so they have there own space, free of the dangers of outside. We live in the country so if they were outdoor cats they would be eaten by coyotes. They rotate on who gets to spend time in the house. We also have 7 dogs, a guinea pig, hermit crab, and an aquarium, oh and two kids 16 yr. old daughter and 8 year old son adopted from Kazakhstan.

Hi Toni - How lucky for your cats to have an outside play place!! We don't have to worry about coyotes, but I still don't believe an outside life is healthy for pet cats (or ferals for that matter!) We move too much to make such alterations to our home, but I knew a breeder (a very good one) who had an outdoor pen in her garden, with a run that led to a pet door so her kitties could come and go as they wanted. I liked that! Our kids would be jealous of your collection of critters, (I think it's so important for kids to be around animals - your two are lucky!), but again, we move, internationally, and it's hard to travel with critters. We have to keep our fur-family small :)

Yep Connie I feel animals are important in our lives, also. They teach kids nuturing, compassion,something that gives you unconditional love and responsibility. I feel sorry for kids that are actually afraid of animals. My daughters best friend when she was younger didn't like and was afraid of animals and when she would come over we would have to put our two pugs in the backyard (which they are not used to being outside) because she was scared to death of them. Love that you took the kittens in and they have been such an important part of your family. I have a big fluffy orange one named Bubba.

A lot of the ferals around here are ginger cats of all shades. I've never had one before, and we ended up with a sibling trio in 3 different shades! Yes, it is sad when kids are afraid of animals. Sure, it makes sense with large dogs, but for the most part, kids need to be taught to act properly around animals... for their own safety if not for the other benefits pets give! It's also sad when kids are raised to view animals as disposable objects. All animals, from the largest whale to the smallest insect, are god's creatures, our partners in nature, and we should respect them all ... not treat them as toys or accessories. Best time and place to learn that, is with parents who set a good example :)