We have a cozy, but time-worn (and kid and cat worn) queen size, white duvet/comforter for our bed. Big fluffy thing, like a down comforter.. but you know, not down, so it is washable and not allergy abusing. It’s a sturdy thing, soft, nice weight, smells clean and nice, etc., but It’s ugly. That really shouldn’t matter, because how often do we use it anyway, and it’s not that bad, really… But it has stains and uneven aging/fading, etc. and it bugged me. (What kind of dingbat buys white stuff with kids in the house? oh wait… ) I could replace it, I suppose, but it’s too good to waste. Fortunately, I save stuff. Material scraps, old flannel sheets… and I like to play with the sewing machine. Honor also likes to play with the sewing machine… at least, now she does, as in, she has just recently learned how to use it, and when I started planning a cover for this duvet, she decided to help as well. Here are some photos of her making her first quilt blocks. LINK

I didn’t want to get too much of a headache trying to be precise with the piecing of this project. The fabric scraps were all crazy shaped and random. Also, as this is made with scraps, some of them from recycled clothes, I figure that this case will only hold up for a limited time… material wears out in the wash!… so time invested in nitpicky precision and fussing would be a waste. Besides, simply covering the duvet was only part of my goal with this project. I also wanted to see what I could come up with. What could I construct? A practice piece, if you will.

I decided to recycle the queen-size flat sheet as the ‘back’ of the duvet case, and to make blocks for the front using the fitted sheet, cut up, plus fabrics that coordinated with the dark blue of the sheets.

I measured the duvet cover  (as it’s been washed numerous times, I couldn’t go by a standard size) and planned to make the case about 5” bigger all around… for the fluffiness of the duvet, and wiggle room.

I had a 6” square plastic template (which includes seam allowances) in my quilting supplies. I measured the fitted sheet and estimated how many 6” square blocks I’d be able to cut out of it. Then, using a simple quilt design program, Quilt Design Wizard (think: advanced graph paper) I came up with a pattern for the quilt. Basically, using my measurements for the duvet, I found that I needed a 15x15 grid of 6” squares. I had my estimated number of solid blocks of flannel sheeting (from the fitted sheet; dark blue) and I set that up in a pattern that I liked, leaving all the other squares of the pattern blank/white. I printed that out.

Next, I looked through my stash for blue and green coordinating fabrics, plus a bit of fabric with some reddish colors for a bit of contrast. I cut a number of the bigger pieces into solid 6” squares and using colored pencils, I filled these new blocks into my pattern… I came up with this: 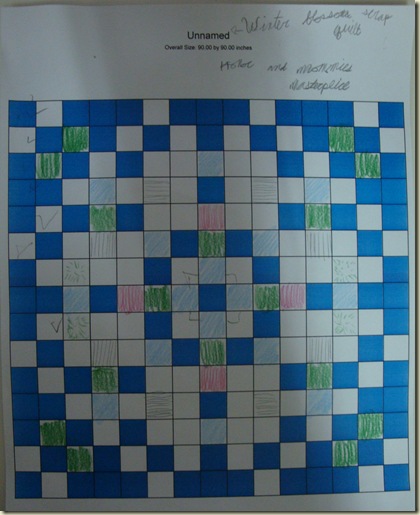 The colored squares were solid 6” pieces, all of the squares left blank/white, were to be random piecework using all the fabrics. Many would be made using 4” and 2” squares, cut somewhat precisely using my smaller quilting templates. Some would be pieced in a totally random manner. To make them ‘match’ the size of the 6” solid squares, I just sewed them, then slapped the 6” template on top of it, and trimmed it to size!

btw – the writing at the top of the pattern is by Honor. She objected to it being “Unnamed” and called the quilt “Winter Blossom Scrap Quilt” and wrote under that: “Honor and Mommies masterpiece”

Anyway, I cut all of the solid pieces, then Honor and I made and trimmed all of the needed pieced blocks. With much cat (non-)help, and using this pattern as a guide, I laid all the pieces out on the floor in a way that the colors of the finished blocks looked nice and balanced, and then stacked them carefully by row (one on top of the other from left to right). I stuck a little numbered sticker on each row pile to keep track. (1-15, top to bottom).

Next step was to sew all the blocks in each row together (the vertical join between each block) and then to sew each row together (horizontal lines). I was a bit worried about alignment (as perhaps some of my blocks were not exactly 6” or whatever) so I sewed the rows together from the middle out… ie. I sewed row 7 on top of row 8, then row 9 beneath row 8, etc. Working from the center, to the top and to the bottom. That precautionary measure probably wasn’t necessary, as the rows came together just fine. 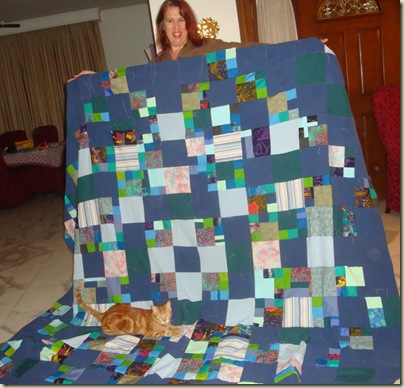 The finished top being cat tested: 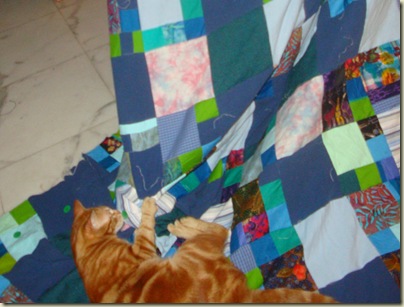 After putting the blocks together, I felt that the plain blue flannel sheet was terribly boring. Sure, it was for the back, and it won’t be seen much, but it was boring. So, I lay the sheet flat out on the floor, threw down a bunch of leftover blocks at random, and sewed them on with a big zig-zag stitch… patches on a patchwork quilt!

The trickier part was construction because the flat sheet wasn’t square like the blocked top that I wanted to attach it to. Seams, connections, and closure devices were also required. Basically though.. this whole thing is a sack. A pillowcase. How hard can that be?? Not at all!

Closing the opening took some thinking, but it turned out to be not difficult, despite the uneven sizes of the back and front. The flat sheet was already hemmed. I simply rolled and hemmed the pieced edge too. To create a way to close the cover, I had to measure again, so I put the cover on the duvet and laid it out flat on the floor with the wrapped-around side edges adjusted evenly from top to bottom, and folded the longer top of the flat sheet over the pieced front. Going across the top opening, using the blocks as a guide, I put safety pins to mark the locations for buttons (on the one piece) and more safety pins to mark the buttonholes (on the other piece. I selected 6-7 mis-matched buttons… more recycling(!)… about 1” diameter, in various colors that match the fabrics. It didn’t have to be sealed, just folded and held closed.

Before sewing the buttons, I also marked the top//left/front corner of the duvet (so I won’t have to worry about fit/measuring – I will just know that the top/left/front goes to the top left opening of the duvet cover).

Also, to keep the duvet from getting tangled up inside the case (although the flannel material keeps it in place fairly well), in two places on each of the 4 sides of the duvet itself, I pinned pieces of soft cord (more recycled bits), about 10” each, to the edge. In matching locations on the INSIDE of the duvet cover, I pinned 8 more pieces of soft cord bits. The idea being to tie the case and cover together, on the inside, in 8 places around the edges, to keep it neatly together when in use.

Ok.. after all that pinning, I took it apart, sewed the strings onto duvet and cover, made the buttonholes and sewed on the buttons.. and it was done. 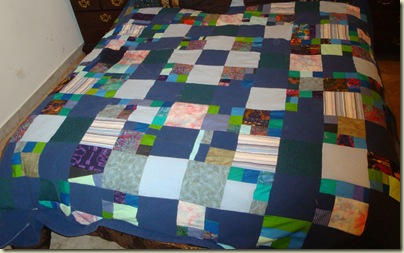 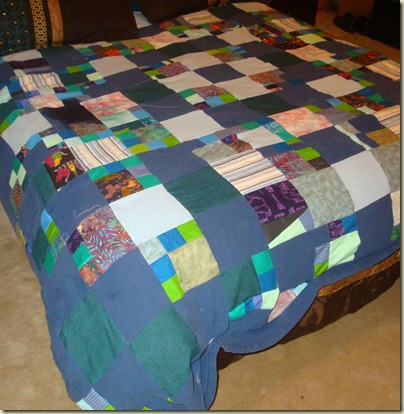 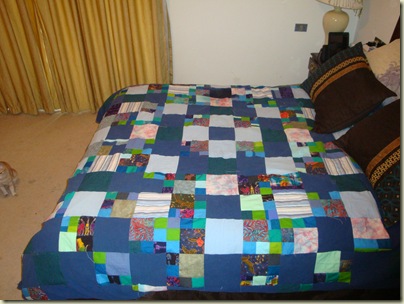 The back of the cover… 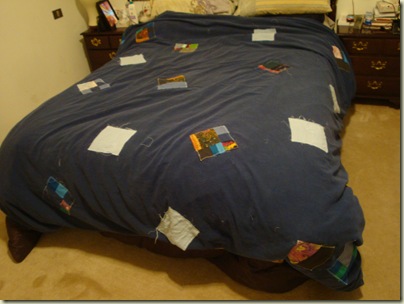 It’s a little dark here (sun went down – flash was too bright, but no flash was too dark!), the main fabric is the same color as the dark blue squares above(!) but I think the patches (in real life/lighting) are whimsical and give a little bit of needed color… it’s definitely not as ‘blah’ as it would have been without the patches. 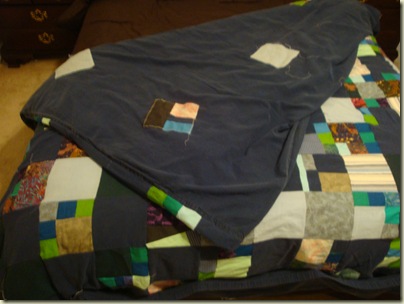 I still need to trim the little threads here and there, and wash it now that it is all finished… but I might just leave it on the bed for the rest of the week. It’s been chilly here lately!

Here is the link for the quilt program that I mentioned above http://www.quiltdesignwizard.com/qdw/default.asp

Connie -that is so whimsical and awesome! Love the splashes of lime green especially!

Thanks! When I first thought about doing this, I thought I might make it a purely random patchwork using only scraps/recycled materials, but it evolved into a goal to make the colors more coordinated, and somehow fit them into a pattern. I liked blue/green as the base, and threw in some crazy bits to sort of 'pop out' as well.

Oooh, I really like the new home page! Love the quilt, but that goes without saying ;-)

Ohh, I love it! I think you did a great job. Thanks for sharing the link!

Gorgeous work!!! You are so creative!

Thank you everybody :) We had fun making this cover. I have always enjoyed crafting, and Honor does too, it's nice to have a partner! Sometimes I like to work on more complicated and 'fiddle-y' things, but this was a fun, fast & useful project that we could enjoy together... and it is nice to have on the bed now too! Snuggly!

Love it! That is so smart. I never thought about making my own new duvet cover. Duh!

Becky - don't give me too much credit! ;) I reacted similarly. I had the duvet stored in the heavy-duty plastic zipper case it came in, but after Cairo and Amman, dust had gotten in anyway. I scrubbed and bleached and scrubbed it (in the tub, it doesn't fit the washer) in vain. Finally, the thought: "I could just make a cover for it... duh!" popped into my head!

It is beautiful!! Love the new duvet cover!

Your blog is linked in the FS Blog RoundUp.

Oh, I like it! Great way to remake an old duvet and use up lots of scraps. :) I used to make custom duvet covers back in my seamstress days, but I never did a patchwork one, just sheets with applique sewn on. I love that Honor called it your masterpiece. :D Too cool!

Wow!! That is so unique and gorgeous! Well done. **pats you on the back**

Thanks Betty! Honor and I had fun with it, and with the cold nights we've been having, it's been awesome to have this warm comforter on the bed!!

(oh... although this duvet is possibly TOO comfortable... it's tough to make up the bed some days as there are usually 1 to 3 cats nesting in it at any given time!)