It is fun to learn about different foods and fruits, and this is a new one for me. 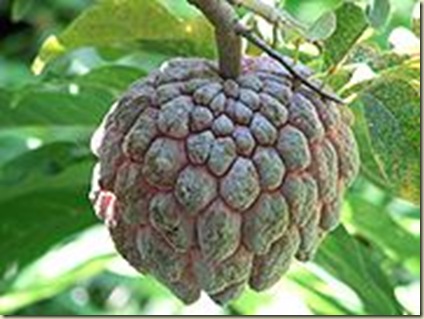 Image borrowed from the Wiki page that has a lot of good information on this fruit: http://en.wikipedia.org/wiki/Sugar-apple

I found a lovely fruit stand, with very friendly staff, on the side of a main road here, very convenient, and the fruit and veg were very nice! I bought the usual stuff – potatoes, onions, broccoli, zucchini and carrots, but I also picked up some pears (obviously not enough pears because they did not last long), bananas, pomegranate, tangerines, grapes and cherries. As I was checking out, the grocer pointed to a very strange looking fruit to ask if I wanted one. Well, I had no idea! My vocab for asking for a description was a bit poor, but I understood it was sweet and I was to peel it ‘like a mango’. He picked out a dark green, medium soft fruit (perhaps like a just right avocado) and I brought it home.  When I opened it, I was surprised by the creamy white meat of it, very soft in consistency – like ice cream grown on a tree – and it was sweet like vanilla/banana ice cream as well.  This Wiki page says the taste is similar to a pina colada! There were large shiny black seeds throughout the fruit. I liked it very much. Everyone tried it. Brian doesn’t like fruit, but he said it was ok. Honor and Brad seemed to think it was a bit sweet. I’ll have get another and try again – I bet the pulp would make an awesome addition to cookies!

This tree this fruit is from is apparently a cousin to the lovely Magnolias of the South. The fruits/seeds do look similar, but apparently, only a handful of berries from this family are edible. It is also related to the pawpaw, cherimoya, sweetsop, ylang-ylang and soursop. Apparently they are high in protein, calcium, lysine, iron, and calories(!), and have been used in traditional medicines.

This photo shows a fruit very much like the one I brought home: 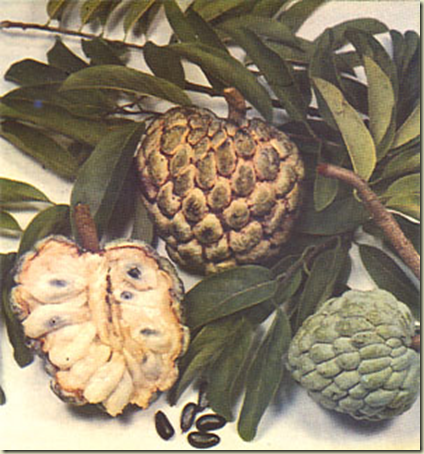 The fruit I had seemed to have more white, creamy meat than seeds, but it probably varies fruit to fruit, season to season. I found the image above, here:

This page has a lot of interesting reading about the food use, toxicity (the seeds are used as pesticide among other things!), and medicinal uses.

I recommend trying this fruit if you can, and if my endorsement is not enough, how about this? A closely related cousin to this sugar apple, the cherimoya, (the inside of which looks exactly like the sugar apple, the skin is smoother) was described by Mark Twain as "Deliciousness itself"… how’s that for an endorsement?

Oh, we loved that fruit! I got it frequently in Egypt, but Jacqui & I seemed to be the only ones to enjoy the slippery sweetness!

I'd seen them, but could never tell which was ripe, or not, and wasn't even sure if it were a fruit or vegetable! :D I really want to try these in cookies - and I am not a cookie baker! - but there's something about these that makes me want to experiment.

What an interesting looking fruit--or whatever it is! I have found a couple of fruits here that are absolutely new to me and I love the discoveries!

We have those here . .. or maybe they are the cherimoyas, but they look exactly the same. I'm trying to remember if I've ever tried them, but I don't think I have. I'll have to grab a couple next time I hit the market, you've got me curious now.

Just looked at the photos of the cherimoya and what we have here is definitely a sugar apple. The texture is the same as in your photos. Now I'm doubly curious!