You can thank us later, Amman. Really, it's not a problem, 'twas nothing, Ma'laish, our pleasure even. You see, the streets of this beautiful city are just a little bit safer these days because of us. We removed a threat that you would have never expected. You can sleep deep with no worries... ok, with less worries... all due to a small sacrifice on our part. We adopted cats who would likely have grown into a fearsome mafia had we not removed them from the harsh realities of living on the streets. A ginger crime wave, nipped in the bud. They still have the criminal instincts, but the only thing these cat burglars can burgle nowadays is our belongings, and we are willing to bear this burden, dear neighbors, to keep you safe.

How do I know these guys are hardened criminals? Well, Ninja has been busted multiple times for breaking and entering. She narrowly escaped after a major assault last night. We even have photo evidence of the deed. At 21-hundred hours, witnesses heard a loud crashing noise coming from Honor’s room, followed by an angry shout from the inhabitant (something along the lines of “Ninnn-jaa! Leave that alone!”) We rushed in and this is what we found: 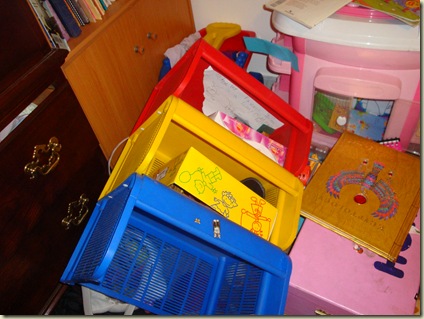 Yes, Honor’s room is always cluttered, but usually the shelves remain upright, not detached and flung to the side of the room. We know that she must have been searching for some of Honor’s small stuffed animals because those are her favorite collectibles, and Honor’s hiding them, only encourages Ninja to search harder.

Pumpkin is the least devious of the sibling trio. He is, perhaps, an innocent, led astray by his more clever siblings. His crimes are restricted to vandalism, as he seems to possess an intense drive to take things apart and see how they work, and petty theft associated with his need to feed his habit. He suffers from a serious addiction to bread (ok, HE doesn’t suffer, but the bread usually doesn’t take it too well). We are hoping that he will turn his life around as he matures and possibly lead his sisters towards a more civil and socially responsible lifestyle… in the meantime, we are locking the bread in the microwave to keep it out of his reach. He has not figured out how to ‘reverse engineer’ the door latch, yet, as he has done with so many other things.

Ninja may be the most brazen, daring, and active member of the gang, but Pixie is definitely the brains of the operation (whatever that ‘operation’ may be … our analysts work night and day, but we have yet to crack their master plan). She watches everything we do intently and knows our routines inside and out. Pixie will take your headphones out of your ears, the straw out of the glass you are holding in your hand, and the sausage off your plate, before you even realize she’s in the room, much less on your lap. She’s run off with vitamin E gel tabs (we always get them back fast.. easier said than done… no chemistry experiments allowed). She’s quite adept at standing on her hind legs and pawing through cabinets left open overhead, and this morning she even leapt from the floor to my shoulder to gain a better view into the higher shelves of the cabinet I was accessing… planning for a later attack, I assume. I have seen her trying to open doors – reaching for doorknobs, tugging at cabinet doors. She also has a slight tendency towards gambling as she’ll jump into any dice game that she can and makes lively sport of it. Lately she’s been stealing battery operated flashing balls from the kids. She’s figured out how to operate them too. We’re not sure if this is part of the grand scheme, or if she’s merely indulging in a passing fancy for a new luxury toy. Trying to start a new fad in fashionable kitty electronics. With Pixie, I believe we should hide the credit cards and car keys…

Now, perhaps you think I am exaggerating. How much can a small cat carry off anyway? Well, perhaps the average small cat may not be too dangerous, but this gang has been practicing since kitten-hood. Ninja will still haul around socks and the small animals that she adores (she just now ran by me with Rainbow Kitty, her – and Honor’s - favorite beanie baby, and is in the corner growling at Pixie, daring her to try and touch her ill-gotten treasure), but she has been training to move larger objects, like robes, throw pillows, and jackets. I’ve warned the family that she may be tired of filching one small item at a time and could be ready to move up. I can see her filling up bags with her loot of choice, and have caught her in the act, making practice runs with empty bags. She’s getting stronger. Still don’t believe me? Well, don’t take my word for it, again, I have proof: 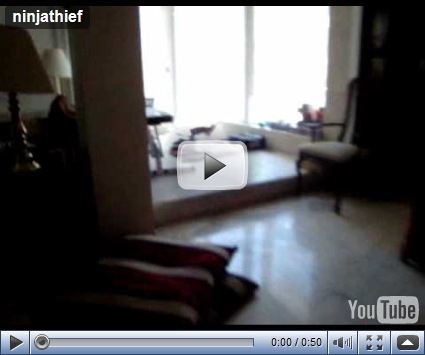 Cats are too clever… humans are lucky that felines do NOT have thumbs.

You know what, that is so true.

I can't even IMAGINE the mayhem if cats had thumbs. Seriously.

Cute video! I will confess to not only enjoy the delightfully wicked kitty cat, but also a closer look at your housing, LOL! As someone who covets housing pictures, I watched the video three times. :)

Watching these cats play... they'll sit on their haunches and use both 'hands' to manipulate things.. ooh! They could get into so much more trouble with thumbs!

You have apparently never read the Terry Pratchett Disc world book where Greebo (nanny Hoggs cat) gets turned into a human. Or else the one where he gets a thumb by getting to close to unseen university ...you really should it would clear up a lot of questions about what cats would do with thumbs.
Nancy

This post got me thinking again about what sort of mix-breed cats we have, DSH (domestic short hair) may be the legal term, but rather meaningless. Cat breeds, like dog breeds, usually have distinct personalities, and our cats are full of personality. Where'd it come from? Their markings, shape, fur/color, and personality led me first to Abyssinian, but they also have some spots, so I didn't rule out Mao genes. Then I found this website: http://cat-breeds.suite101.com/article.cfm/the_egyptian_mau. This describes our cats! The whole article does, but here's the bit that goes with this post:
"Maus are exceptionally strong for their size, and very active, intelligent and alert. They enjoy spontaneously attacking household objects and engaging in lively play. If not provided with plenty of toys, they will turn their attentions to an owner’s knickknacks. Maus usually know exactly where their toys are, and many of them are adept at opening cupboard doors to access their belongings."

Of course, they are mix breed and Pumpkin's spots aren't show-cat distinct. Pixie and Ninja's spots have turned tabby (except on their tummies, so cute!), which is also not a pure-bred trait, but I think I will have to change my amateur guess about what they are from an Abyssinian-Mau-moggie to a Mau-Abbyssinian-moggie!

Hi Nancy, Nope! It's a fantasy series. I'm thinking about reading it, but... it's fantasy! ;D Fantasy is something I can only take in small doses, or wrapped around something else, like sci-fi or military fiction. I know I should read it though, as it is a classic series. And I do have a lot of ideas of exactly what cats would do with thumbs... at least these cats! Scary.

It's Friday, and that means that the Weekly State Department Blog Roundup is up - and you're on it!

Here is the link:

(If I quoted your text or used your photo(s) and you would rather I had not, please let me know. Please also be sure to check the link(s) that I put up to you, in order to verify that they work properly. If you would rather that I had not referenced you, and/or do not want me to reference you in the future, please also contact me.)

you named them SO well!!