The Evil Drain is Evil, and other chaos

I haven’t been blogging lately because the kids are out of school and we’ve been happily busy. So happy in fact, that the bits of chaos that keep jumping into our lives haven’t done much beyond make me go get the mop, smile, and hope that it’s dried out from the last mess I had to clean up.

First are the evil drains. They ‘speak’ to the cats. There’s nothing in there but water. Ever. We’ve never seen bugs or rodents, but the drains call to the cats. “Remove the cover” it tells them. “Plaaaayyy!” Covering the drains with rugs does not work… 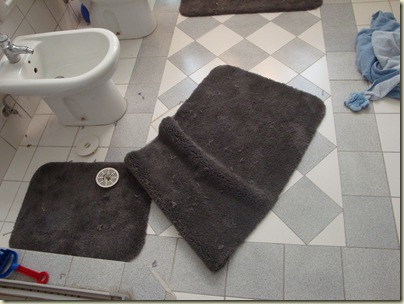 Nor is it healthy for the rugs… which are beginning to look a bit ‘plucked’. 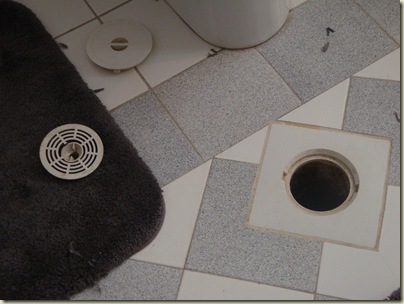 The drains in all three bathrooms are now taped down, and I feel it’s only a matter of time before the one in the kitchen is too. Of course, it would be more practical if the darn things would latch, but they don’t. Oh, and why drains in the floor? I really do not know. It is handy to clean the floor and swipe excess water down the hole, and it really came in handy the one day when a pipe fell out of the back of the bidet and started shooting water all over the room… and guess who had no access to the shut off switch??! But handy as they can be, I wish they’d stop teasing the cats.

Anyway. We finally got a pretty new kitchen table!!! Look at this: 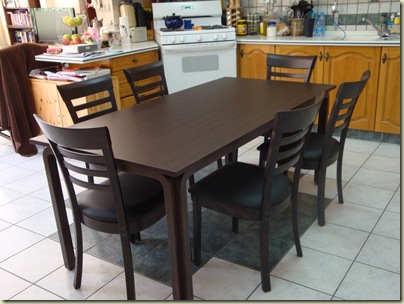 Simple, solid, practical. I like it! (State folks: Look! Chairs to use around kids WITHOUT white cloth seats!)

Why is this in a post about chaos? Well, back to the cats. For one thing, cats are smart… or, smart alecs… actually, both, depending on what suits their needs at the time. They believe that a new table means that all the old table rules were tossed out with the old table. Extra chairs mean the cats are allowed to sit at the table too, right? And more room on top means plenty of space for the cat to hop up and have a sniff or two. Um… no.. The funny thing is, they are past the need to grab people food whenever they see it available. When we first brought them in, we had to watch our plates! Not sure if it is a feral cat thing because Misty and Ramses did the same thing when they were tiny. It takes a bit for kittens to become secure about their food supply. These days, they will, more often than not, turn up their noses when offered food from our plates, but it doesn’t mean they do not want a sniff, taste, or at least the offer from a human plate. The other reason this new table is mentioned here is because it is slippery. Ninja came running through the kitchen one day… desperate to greet us after we returned from an outing… and she leapt to the table to say hello. And slid all the way across, taking out several glasses (plastic thankfully) that had been left out. Tsunami in the kitchen! Unfortunately, a couple of the glasses had a bit of diluted juice in them so we were scrubbing counters and walls as well as the floor.

I spent another day scrubbing the kitchen when a shelf fell out of the cabinet. Crappy shelf support just gave out and bottles and jars came leaping out at me. Of course, I was sitting at the table, back to said cabinet, when it happened. When I recovered from the heart attack, I turned to find that 9 jars had fallen. Three in the sink, one broken. One on the edge, broken. Five on the floor, one broken. Salsa and tomato sauce exploded EVERYWHERE in the kitchen. I had to clean all six chairs, the top and bottom of the table, all the appliances, etc. When I posted this on Facebook, friends were quick to assume it was the cats… this time/mess, they were totally without blame.

My meringue is getting more successful. Isn’t this pretty? 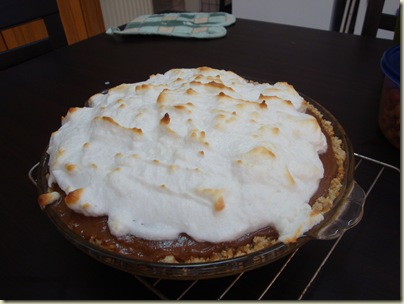 Unfortunately, my pie was a total failure… the custard was more like sloppy pudding. Back to practicing… If I come up with a successful recipe, I’ll share.

There has been a ton of arts and crafts mess too. Pixie has been running off with pens and paint brushes… not sure what she’s been up to. 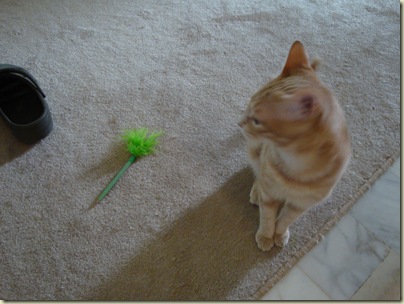 and both girls like to help Honor with her artwork. 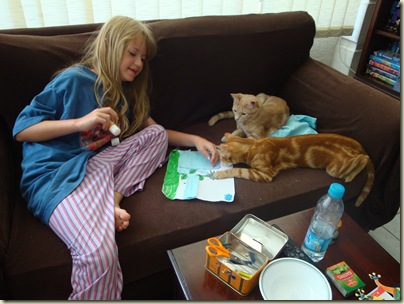 Honor set up a concert for us the other day. Pictures, decorations, chairs set up with our names on them, etc. She also had the idea to serve finger food, and she practiced making little sandwiches with crackers and cheese earlier in the day. The concert was after dinner though, so we were not hungry. Honor was the star, and played several songs for us on her toy organ. She made them up as she went, and her performance included funny faces and other drama. She really is a star!

Anyway, despite the messes, we’re having a nice relaxing break, and hope you are too.

Well, those cats can be quite the troublemakers! But they're worth the mess, right? That table set is gor-geous! And hooray on the the meringue is still better than mine. (i've never made one before) Enjoy your break!

They are trouble, and it's because they are amazingly clever kittens... yes, I am biased, but they really are smart! Always wanting to play games and play with toys... and not just their toys. They are so much fun and very sweet :) My pie turned out awful, but I used some of the extra meringue I made for it, to make rosewater meringue cookies and those turned out YUMMY! No photos of those, I haven't figured out how to make those pretty ... just tasty! I'll have to post that recipe. Brian says they taste like cooked cotton candy!

LOL I can totally relate! Our cat isnt too bad when it comes to people food.....unless it's yogurt. Yes, he LOVES yogurt and pudding or and spaghetti O's. He is sooo strange, but he will beg and paw at you if you're eating it and not sharing!

Give the kitties some news paper, my cats have always loved that!

The problem that were having now is the cat bringing in all of his kills. In the past week I have had to clean up countless mice, and the hubby has had to "rescue" a hurt mouse and a hurt bird from inside our house. Eeewww.

Nicole - we usually do not get a newspaper, but they do like balled up paper scraps! And yes, the cat (Ninja) HAS actually eaten Honor's homework once ;D
And I do believe the yogurt! Our late cat, Misty, loved rice pudding in a cup. There was this brand, with a bit of fruit in it (Muller-rice) that was an amazingly delicious snack. He'd hear the tinfoil top and BEG for the cup when we were done. We moved away from the land of Muller rice, but forever after, the sound of the top being torn off yogurt or any other similar container had him running in hopefully!

What an exciting bunch of messes and a very nice new table!

Those kittens are just too clever ...
Foodwise, we have just had a bit over a week in Singapore, enjoying lots of different food ... yum yum
Will have to find time to write about it ... therein lies the problem!

What an immensely practical table!