Pros and cons and skulls

There are definitely pros and cons about getting sick. When you are very ill, you get lots of attention and sometimes even prezzies! The cons are pretty obvious. You're sick. You have to have surgery. You have to be stuck in a boring hospital for DAYS! The doctors don't let you eat when you are starving! You get banned from school for even MORE DAYS! And from PE and Taekwondo for the rest of the month! Arrgh!

But, Brian also had a lot of pros. He was loved on and spoiled by everyone. When we arrived home, not only did he have nice balloons and a sign on his door from his friend, there were banners on the wall in the entry from daddy and Honor. 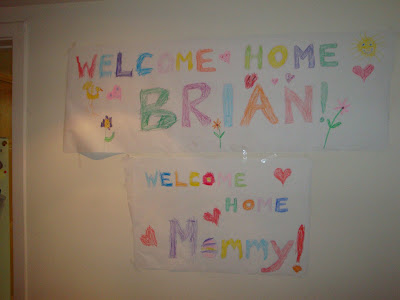 As we drove in from the hospital, the bawwab (aka - the guy who does everything) for our building, Ahmad, hopped on his bike and rode off. We found out why a couple minutes later - he came to our door with a big bouquet of flowers for Brian :-) Brian also received an awesome set of Legos (one he'd been drooling over in the Lego catalog) from Brad's office mates. When we went to pick up Honor one afternoon, we stopped in Brian's class to get school work for him... yea.. I guess we have to put that in the cons pile. Responsibilities do not go away! But along with the big pile of homework, Brian got an armload of nice cards from his classmates. 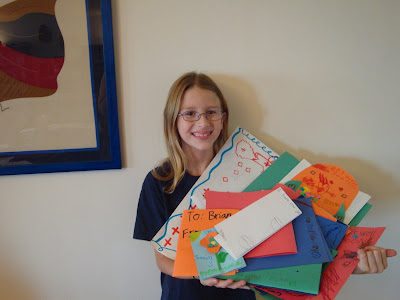 Brian should go back to school tomorrow. He's had his bandage off since the day before Thanksgiving and the wound looks very good. He didn't have any stitches. He's been feeling good all this week and seems to be getting his energy back. The first week home, he was very tired in the evenings, much earlier than he usually was. He seems to be back to normal now.

He's been getting through all of his homework and doing a great job. He loved the math and science, and as typical, we have had to struggle to get through the writing. He is typing up his work now. His class is writing little books on subjects that they are 'experts' in. Brian chose playing the game 'Age of Mythology' as his subject. He wrote up an introduction, and three chapters full of information on the game. Pure torture for a kid who hates to write, but he's a done great job. It is odd that he can TELL in great detail, and lovely vocabulary, all about subjects he likes, like this game, but when it comes to writing it down... it's painful. He'll tell me that it is "An action game where you gather resources, and the favors of gods from legends, in order to build your towns up, advance through the civilization ages, and create strong armies to win campaigns". He'll write down, "It's a game with god powers." I have to remind him that "It's not a list, it's a story!" He tries to make it as short as possible to get through it, and just get it over with. He still needs to work on improving the speed and neatness of his handwriting (he hates it) but I think that as that skill improves, so will his desire to write down all this good stuff he thinks up. Thank goodness that we get to put the final version on computer - he likes typing better than writing.

At least he was able to have some fun with his science project. He had to demonstrate knowledge of the human skeleton, and could choose a way to do so on his own. He chose to do a comparison of the human skeleton with an animal's skeleton - the animal he chose was a dragon! First, he looked up with a bunch of facts about human skeletons. He also found a good, labeled, human skeleton on the internet. He also found a labeled dragon skeleton on the internet! Using the facts he found about humans, he was able to write up a bunch of 'facts' about the dragon skeleton too. He also wrote up a Venn Diagram to illustrate how some aspects of human and dragon skeletons overlap. When he laid things out, he found that even with pictures of skeletons, pictures of dragon and human (a knight, of course), and his diagram and fact sheets, he still had a bunch of space left on the poster. So, he went back on line and found a bunch of skull pictures - dragon and human - to fill in the spaces. I found a good femur bone picture and made lots of little bones for decoration.

Brian directed all the cutting and layout of the pictures, but Honor and I were recruited for physical labor. 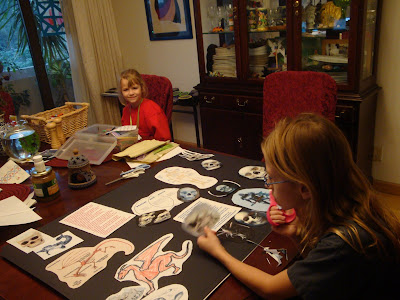 His finished project turned out very nice. I was very proud of all the research and good internet skills he used, not to mention the creativity in coming up with dragon facts. I thought he showed good understanding of why dragons might have certain shaped bones, while humans do not - like simple hand bones with claws, vs complex hands with thumbs. Doesn't it look good? 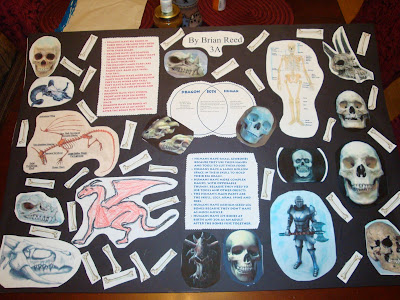 We delivered his project to school yesterday when we went to get Honor, and he got to see his classmates. Everyone had to see his surgery incision and ask how he felt. It will be good to see him get back to his full routine tomorrow!
Posted by Connie at 9:18 AM

What a great project!! Very creative! :)