A few days into our trip, we were at the Oregon coast, Toledo and Newport area. It is a lovely part of the state. Toledo is a bit out there though. I had to tease Brad’s cousin, that even when Brad went to Yemen, he was able to use our mobile service to call us back in Egypt, but in Toledo… not a blip of a bar! Nevermind, the beautiful view and clean, fresh air made up for our lack of phone coverage!

It was good to meet Brad’s cousin’s kids. We’d heard about them in email, but this was the first time we’d met them in real life. Thanks for sharing them with us! Good to see his cousin, her parents, and boyfriend as well. Alana cooked up a beautiful Northwest style feast for us on the grill. Salmon … good for Brad, I don’t like the stuff, I know, I know, my loss… and venison steak, first time I ever tried venison and actually enjoyed it (quite a lot actually!) After dinner, the kids got to go out and learn to catch crabs. This was something of a tradition with my husband and his cousins, so it was very special to have my kids go out and try it too.

First, a lesson about the trap itself. 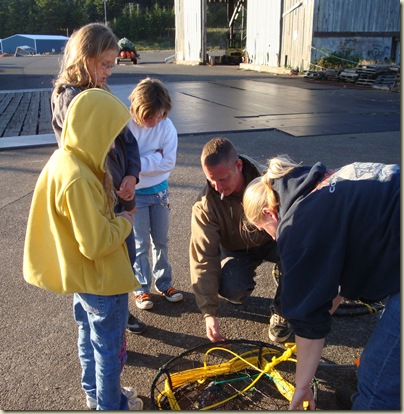 Honor and Alana throw in a trap. 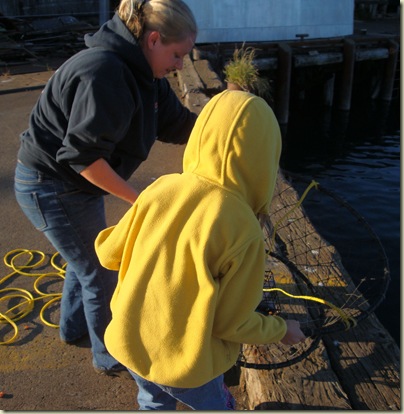 The kids got a good lesson in how a trap works, and safety lessons too… like to stand away from the rope when you toss it in. Might seem obvious, but important! 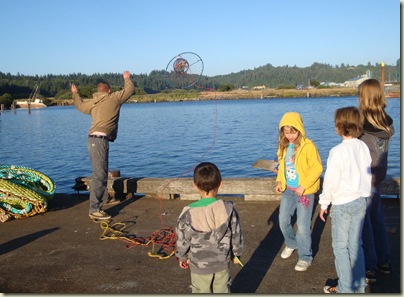 The first trap is reeled in. 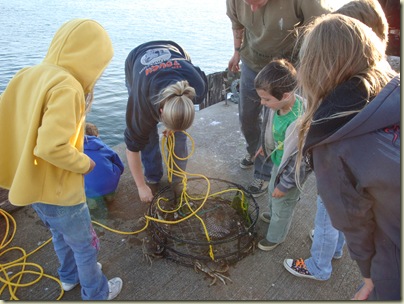 Honor is not so sure she wants to ‘hold hands’. 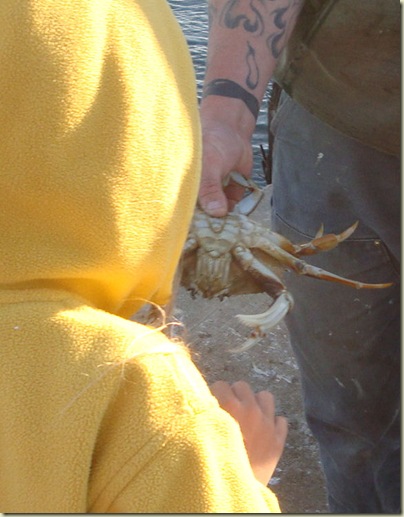 A crab missing its pinchers was in the same trap, and Honor felt safer with that one. 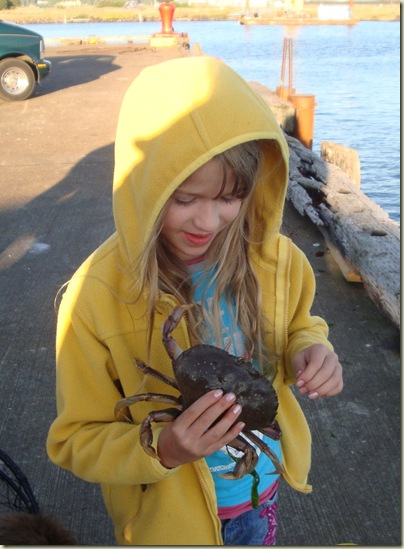 Brian quickly learned to pick them up and help return the little ones to the Bay. 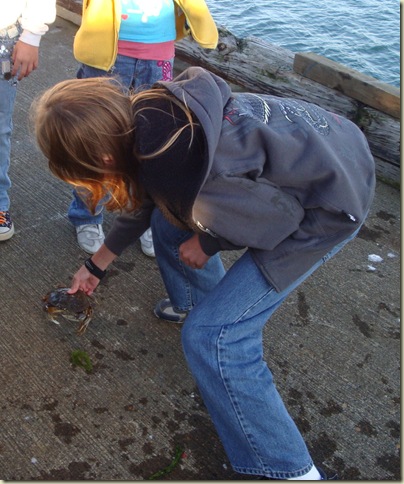 I love this shot! 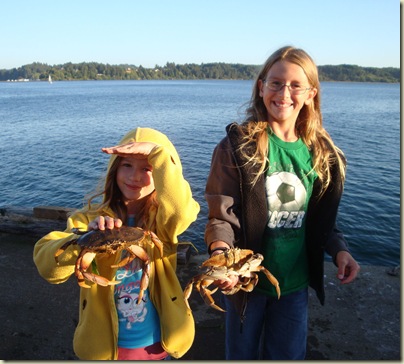 The kids got to help. 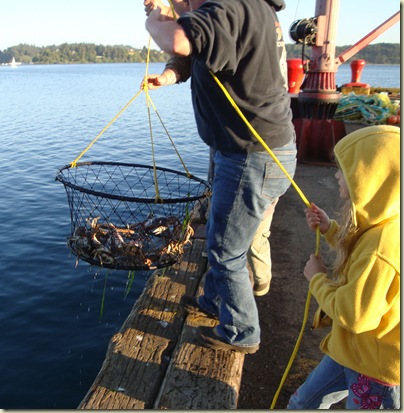 and they measured the crabs for ‘legal’ size and gender. Most of the ones caught were too small to eat. 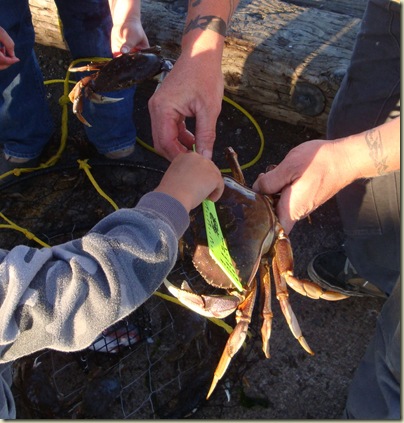 Pulling crab traps out of the water, with bait and crabs, is heavy work. 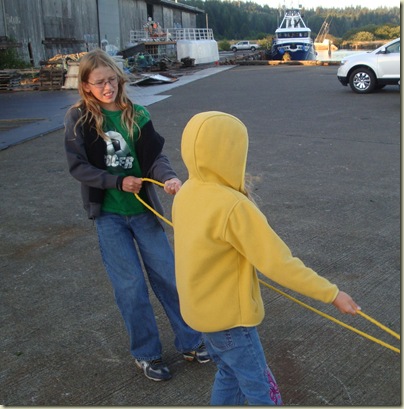 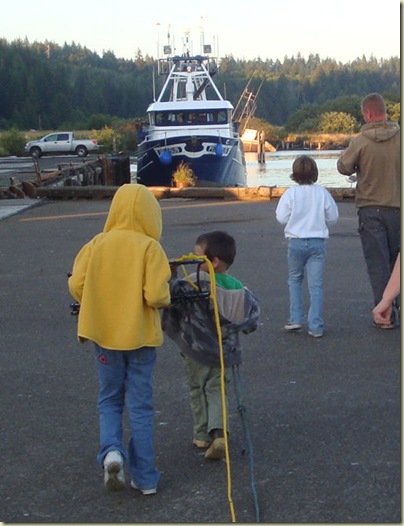 Returning the little ones… a red rock crab on the left, and a dungeness on the right. 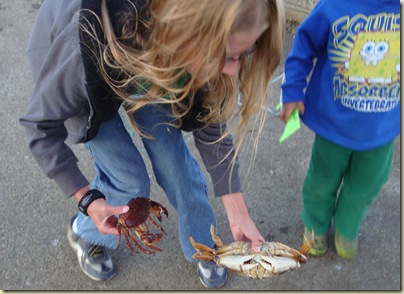 Crabs weren’t the only critters to watch on the bay. There were a lot of birds as well. 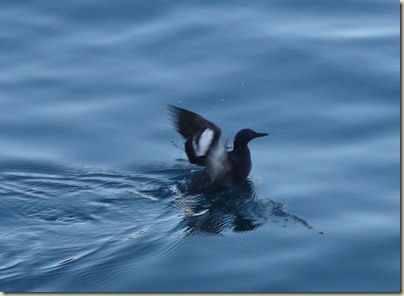 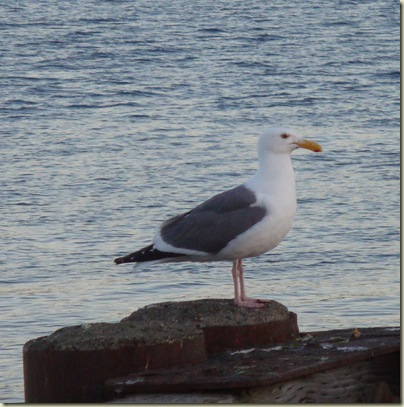 We were out about sunset, and the view was lovely… and not just the view, can’t you just feel that fresh air?? Seriously. Crystal clear. 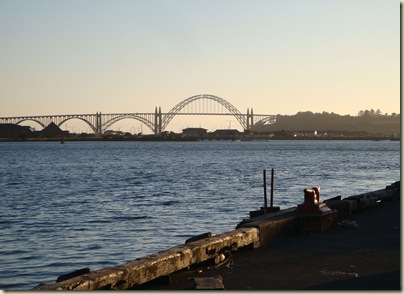 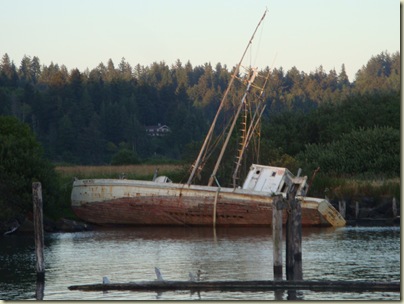 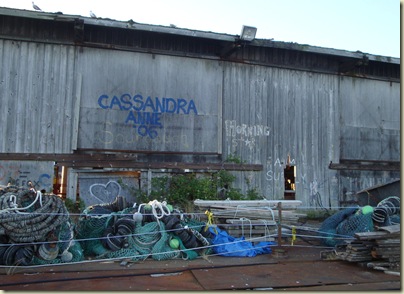 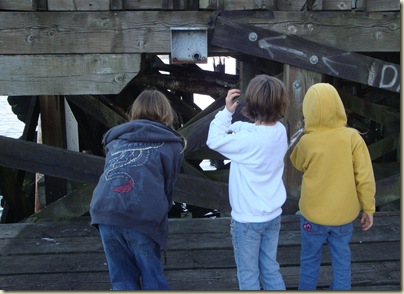 While waiting for the traps to fill, Mitch took the kids down to explore the rocks and look at little crabs. 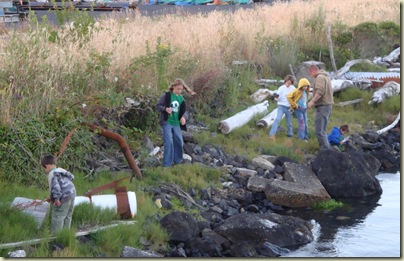 As we were packing up to leave, this boat was heading out to start work. 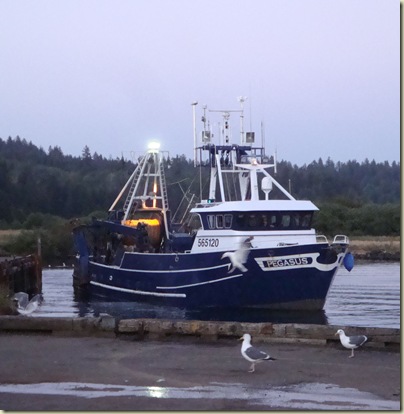 No, the kids didn’t actually eat any crabs, but this was an outing, thanks to Mitch and Alana, they won’t soon forget. Thanks! 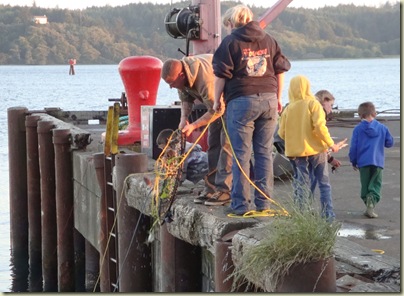 Cute title. I wondered if it meant you were fishing, or cantankerous. Glad to see it was fishing. ;)

LOL! I can't see seagulls now without remembering that "Mine! Mine! Mine!" from the movie ;D

What a great experience for the kids! Family traditions are so much more fun when they are passed on to the kids.

Emily - it's especially nice as this is not something we have the place/gear/etc. to do on our own. It was really sweet of Brad's cousin to make the time to do this :)