We stayed in Bandon for three nights and enjoyed exploring the area. Our first night we met up with one of Brad’s brothers who was also traveling through Oregon with his family … separate routes and plans, but it was good to catch them there, as well as down in California later on.
In addition to enjoying the beach near our cottage, we drove a little ways out of town to Bullards Beach State Park. It’s a nice area with year round camping. Check out the web site (http://www.oregonstateparks.org/park_71.php) for more information. We stopped by to see the beach and lighthouse.
A view, looking back into the park, from the top of a sand dune leading down to the beach. 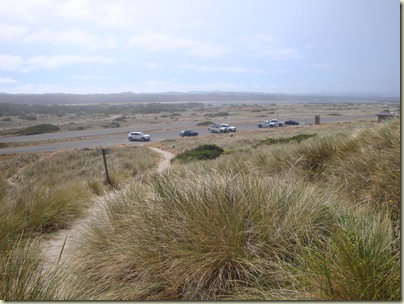 It was warmer than usual, so we stopped to park our regular shoes…. 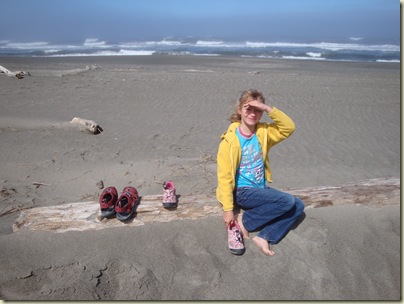 … and don our invisible toe shoes! Can we join the club with Shannon and Kolbi yet? 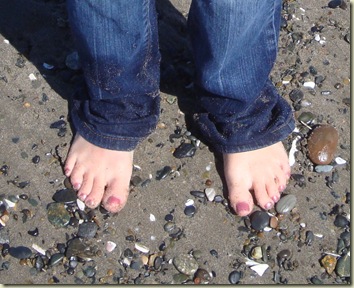 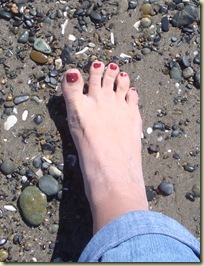 I know… so totally cheating! But I was thinking of you guys as we barefooted in the sand!
A beach full of rocks means you MUST throw at least a few out into the waves. It’s irresistible! 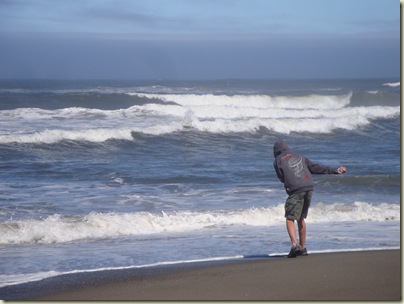 Another view of the sand dune, and two of my sweeties. 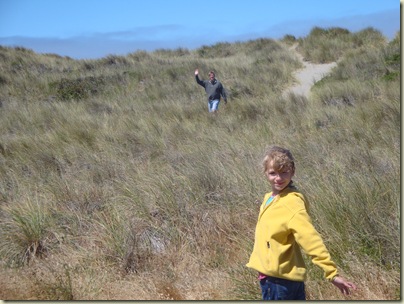 We visited a couple of the beach access points in the park. The second one was near the lighthouse, and had masses of driftwood. 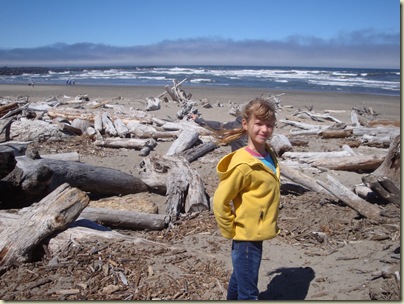 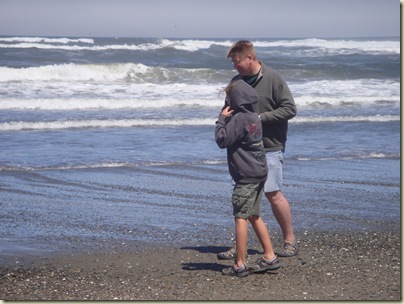 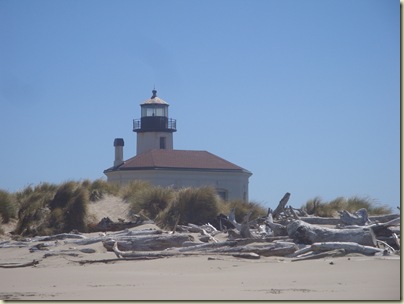 We didn’t go up to see the tower as our ‘toe shoes’ were not permitted. 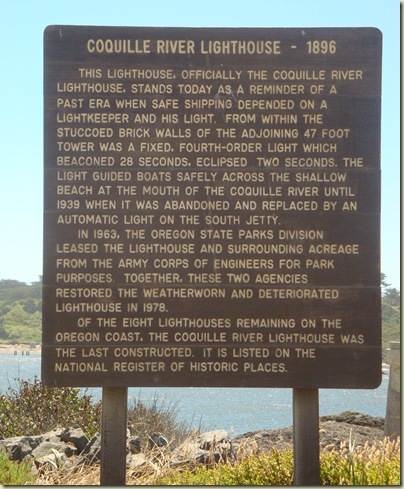 The waves were particularly pretty this day, and even the kids were drawn away from play and rock hunting to simply stand and watch. 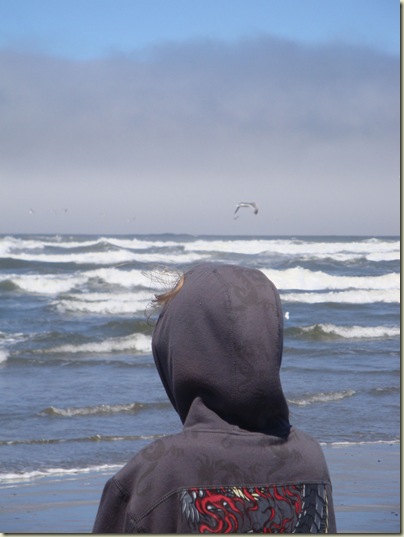 Honor got cold fast, and quickly retreated to the shelter of our trusty rental car. Yet again we ended up with a Ford Edge from Budget/Expedia (both of which we usually have very good service and rates with), and I have to say, I can see us owning one of these awesome little trucks some day. A view of the Coquille river. Heading inland… 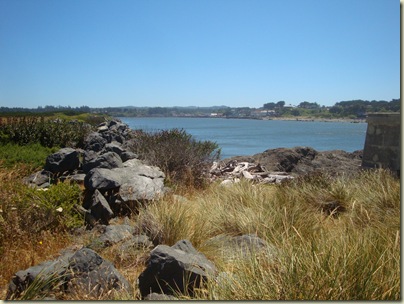 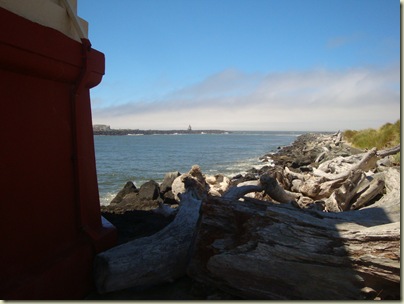 I didn’t often remember to take my camera to town, but here are a few scenes of Old Town Bandon from the evening I did get some photos. 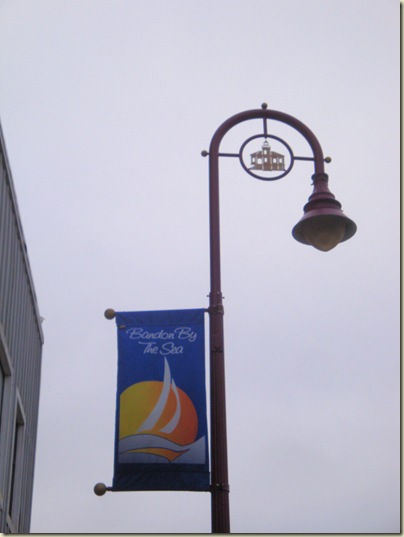 Typical (to me) Oregon weather… overcast, cold, and windy. 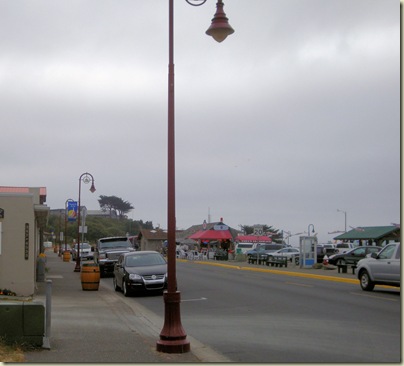 Verrrry windy. Just look how this tree has grown! 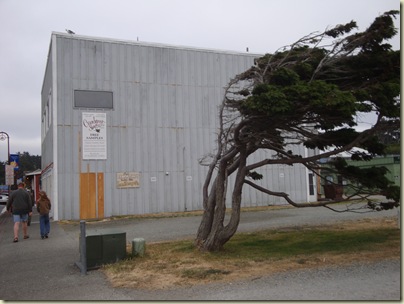 Downtown has a lot of nice restaurants, shops, and arts & crafts supplies. 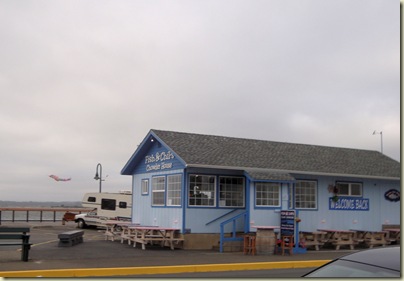 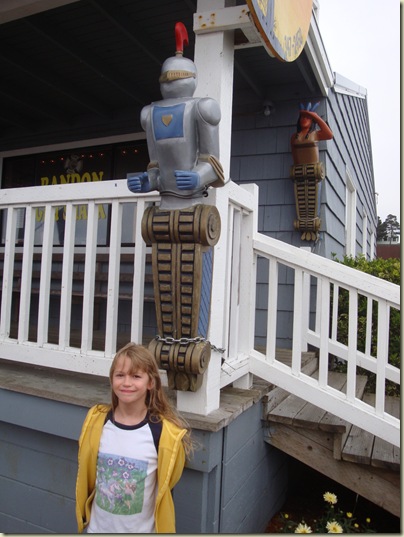 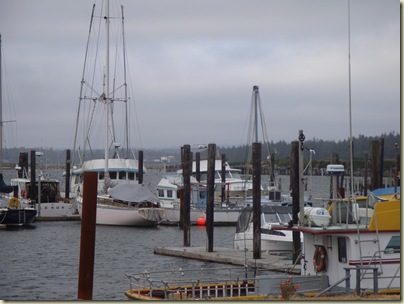 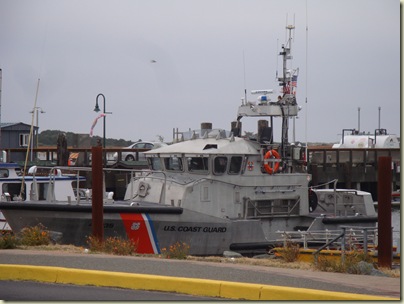 Heading out of town, looking out near the mouth of the river after sunset… how peaceful! 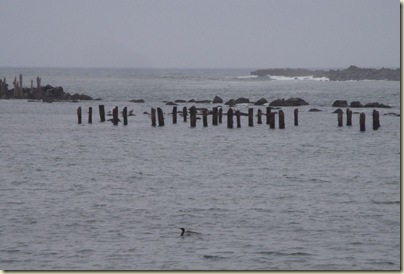 And we saw these tsunami signs everywhere. I don’t remember them from previous visits. 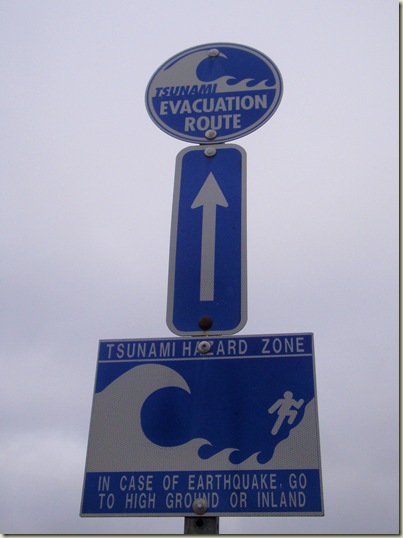 I love the graphic! While I understand that there’s only so much room on such a small sign to convey a lot of information, and they do what they can, this looks, to me, like: “In case of giant Japanese waves, climb a steep mountain!” 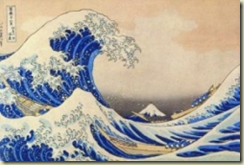 Just saying… I’d rather get in the car and drive away!
Posted by Connie at 5:06 PM

Love the pictures! Miss you guys!

And you crack me up - although I have to graciously state that my HUSBAND (not me) is a member of Shannon and Dave's illustrious club. I'm too much of a toe shoe chicken! LOL!

Christine - Miss you too! Give everyone our love and a few hugs or three! :)

A Daring Adventure - I gave you credit as a promoter/advertiser for the 'club' ;)

Beautiful shots. Honor's nose definitely looks cold in that shot of her by the car. :)

My kids would love to go barefoot . .. I'm more of a flip flop than a toe shoe person.

Expat Mom - She was freezing! But you notice, even though she retreated towards the car, she's still outside of it! We were all out of our 'natural habitat', but couldn't resist playing in the cold anyway! btw, I have to say that I've done far more harm to myself trying to walk in flip-flops than barefeet, ever. I need all or nothing when it comes to shoes.

I love your photos! Looks like a great place to visit.

I sometimes worry that my photo resolution is too big, but then again, I really like the clarity and it's my blog ;) ... it is a lovely place to visit!