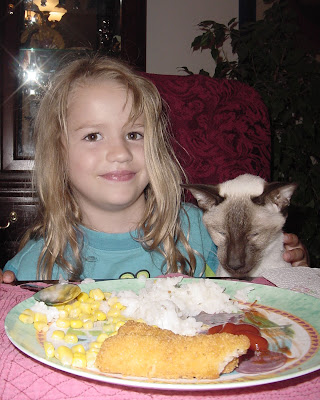 Ramses knows better. He's not supposed to be at the table. But oh my! There are fishsticks for dinner! Rice and corn too. Get rid of the ketchup and put a few marshmallows on the plate, and he'd be in heaven. No wonder he is confused about who's supposed to be sitting in this chair - that looks like a meal fit for a cat! Honor had to push him down and tell him no several times... but he just kept hopping back up as if he belonged.

Actually, a precedent was set, many years ago, and he apparently hasn't forgotten. Brian learned to enjoy fishsticks because of Ramses. I picked some up when he was 17-18mos old because I thought they'd make a fairly healthy, toddler friendly, snack. Fishsticks are iffy foodstuffs in my book, not great, but not awful - ok in moderation. And as Brian was growing fast, I needed to keep things on hand for when he absolutely needed to eat, right NOW!, and they are handy to fix up.

But, they looked too weird for Brian's taste, when I presented them. No. Do not want. Ramses came sniffing over, so I offered him a bite. "See Brian, Ramses likes them." (give it to Mikey, he'll eat anything...) And Ramses did like them, very much. He hopped up next to Brian in his chair, reached out with a paw, pulled a piece of fishstick close to him, and ate it. Very naughty, but Brian thought it was hilarious, so I indulged them. Ramses finished the first, cut-up fishstick this way and grabbed the next to pull it to him - Brian grabbed it back! Brian ate most of it, but gave some to Ramses. So, giggling and grabbing, the two of them finished the snack. 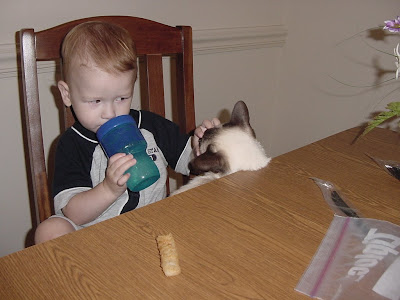 We don't like the cats to beg at the table. They are about 80% 'good' about it too. Nor do we advocate letting kids and animals share the same food - well, not usually! But I guess it is a good way for them to bond and be friends, and this was a breakthrough food for Brian. One of those that I could use to get him to try other new foods without fuss - "Remember how much you liked fishsticks? Maybe you will like this too?" Ramses was also encouraged, by Brian, to try new foods too. He usually wasn't interested, he didn't start broadening his food horizons until Honor came along. She could hand Ramses anything: broccoli, macaroni, a handful of grits, whatever, he'd accept anything from her pudgy little baby fingers... and until now, he always wants to share the fishsticks.
Posted by Connie at 10:51 AM

Good that Roxxy is a health-conscious dog. Of course! That wonder-white-bread stuff is icky, and sticks to your mouth worse than peanut butter!