Why he's a housecat

Misty was born in a barn. A old stone structure somewhere out in the dales in North Yorkshire. He's a big strong cat and would have made an excellent farm cat. Note, I said 'would'. That's past tense. He has always been our mighty hunter... for things he could get after in the house. Bugs, toys, insects, the red dot from the laser pointer, his brother, etc. He even made a huge effort to get our rat! He will even still play a mean game of soccer, and believes nighttime is the perfect time for yodeling. But after many years of living the easy life of a globe-trotting, but strictly indoor, cat, he's lost some of his instincts. Like the concept of stealth, or camouflage!

I was trying to get the kids in bed, and as Honor was brushing her teeth, I herded Brian into his room to brush his hair. Misty, all 20+lbs of him, snuck in after us, and although he were looking right at him, stealthily (he was quiet, but we did notice him!) snuck up on Brian's bed, and burrowed under a pillow... "They'll never find me here!"... oh yea? Nevermind that he is too big to fit under a standard pillow, he also forgot to pull in his tail. 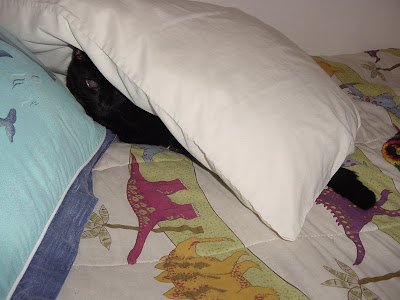 oh yea Misty - you are so busted. 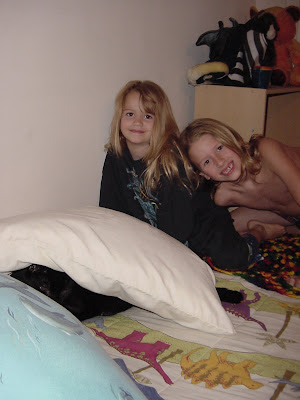 He was determined to play hide-n-seek though. We stole his pillow, but as soon as we opened the bed, he was burrowing in the bedcovers at the foot of the bed!
Posted by Connie at 9:47 PM