Honor has been fascinated with Brian's taekwondo for awhile now, especially so since his last test. She is too young to start taekwondo as an after-school activity at CAC, but I was able to sign both kids up for a summer session at a nearby community center - with the same instructor that teaches at CAC! How is that for consistency?

Brian actually got more than he bargained for - although I think he enjoyed it, and he did very well for a surprise change of roles! The beginner's class was first, and when the instructor saw Brian, who had already changed into his uniform, he came to me and said that this class was 'too easy' for Brian. I explained that Honor was there to have her first class, and Brian was signed up for the intermediate class that followed the beginner's class. (Same day, one after the other. Consistent and convenient!) And so, Brian found himself drafted to be the teacher's assistant... a surprise responsibility that he handled very smoothly.

First thing about Taekwondo is learning how to stand still and quiet - and listen to your instructor! This signals that class has begun. Honor's been practicing - maybe a bit too much. 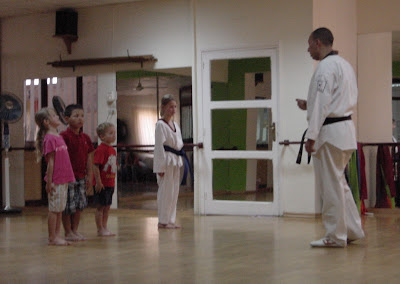 Then they learned to bow, to show respect to one another. 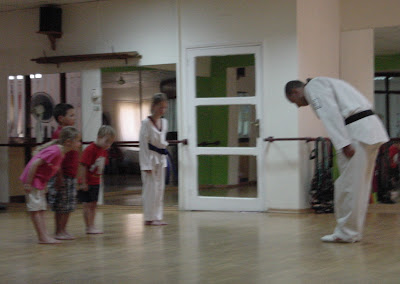 Next was a chance to tell their names and ask questions. He asked the kids, "Why are you here?" All of them are 4 and 5 years old like Honor, and they really weren't sure how to answer! He wanted them to say, "For taekwondo class.", Then, "Why take taekwondo?" Honor's answer was "Because she watched her brother". This wasn't a serious quizzing, this instructor is great with the little ones and he was just getting to know them a little. 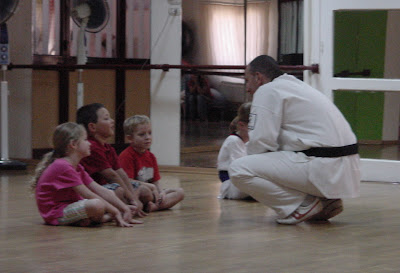 Brian led the beginners in running, and demonstrated all the different styles of running and moving they do. Sideways running, backwards, etc. He also had to count in Korean as the teacher demonstrated moves. He got a good workout. He also learned to really pay close attention to what he was doing. The teacher said that as a yellow belt, he cut him slack, but as a blue belt, he'd give Brian push-ups if he forgot a detail, like giving a yell before starting a move. Brian had to do push-ups once. 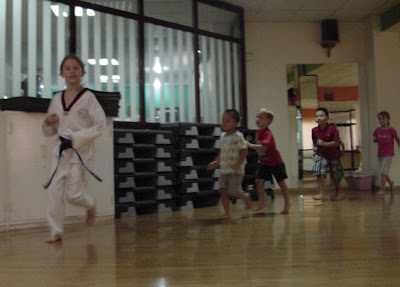 As part of teaching the kids a bit about how to punch, and how to give a loud yell, the instructor went child to child and had them shout and punch him as hard as they could in his chest. They thought this was great fun. Here's Honor's turn to give him a few punches. (I know, she's mostly hidden, but I was sitting out of the way.. using the old camera, and no flash to keep from distracting the class - I tried!) 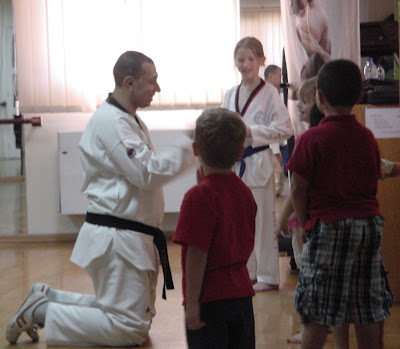 Honor is quizzed on her right and left, and told to give a powerful shout as she punched the target. 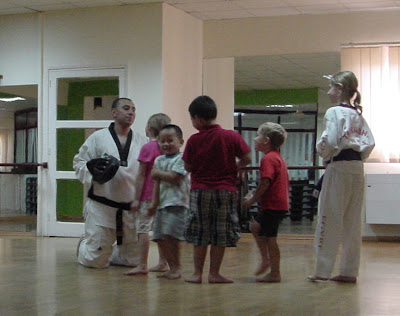 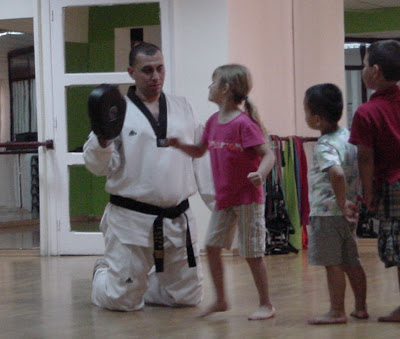 I think Honor really enjoyed her first lesson. She wants her outfit though. After a full day of summer camp activities - swimming, playing games, art, etc. - plus an hour of Taekwondo, Honor was tired. We still had to wait for Brian's class though.

Brian's intermediate class started about 10 minutes after Honor's. Brian had only a short time to catch his breath! The workout the intermediate class did was grueling. Mostly aerobic. Lots of running, plus some strength exercises. The last 15-20 minutes was kicking. The instructor held a target, the 6 or so people in his class lined up, and, one after another, over and over, did kicks, kicks, and more kicks. They all looked exhausted after they were finished. Brian had also had a full day of camp activities as well as two hours of taekwondo, and I am surprised the poor kid managed to not fall asleep in his dinner!

Brad called after we ate, and both kids told him Happy Father's Day. They told him a little about camp and taekwondo. They also told him about two new toys that arrived in the mail for them today - extra special toys that they earned for themselves. Then they were done. Before I could even finish talking with Brad, they were demanding to have their hair brushed, etc. so they could go to bed! Now THAT is tired!
Posted by Connie at 11:44 AM

We saw a really cool Taekwando demonstration on Friday with lots of high leaping and breaking boards with kicks and chops. I would want the outfit, too! So nice that Brian could be the teacher's assistant.

I'm proud of how well he did, and also for the enthusiasm Honor showed. They both had a great time. Watching the instructor, or the red belts in the class, is very impressive. There were a couple of older HS/college girls in Brian's intermediate class, yellow and blue belt, who were very good too. Honor loved watching 'the strong girls'! My 'almost in college'-aged niece wants to take the kids to her karate class when we go on leave and they are looking forward to that.

How cool! Honor and Brian get exposed to such great stuff!