We have been planning for the party in our apartment complex for weeks now and I and another lady were in charge of planning games. One of the games I created was a bean bag toss. I had most of the things I needed, but realized that the only beanbags I had were two that Grandma knitted for the kids. Couldn't send those to a party, outside, with who knows how many kids. I couldn't be sure that the bags would survive tonight, and the kids like their beanbags. So...

I have plenty of fabric scraps, and beans. I decided to make some beanbags. The target was a box painted like a haunted house, so I made up simple little monster beanbags. The best part though, was Honor decided to make beanbags too. She had to have me help her with the first one (the red one below), and I had to add some extra stitching on both to keep the beans in, but on the second one (the blonde guy with green skin), she picked out the fabric on her own, cut the pieces, found a needle and thread ... THREADED the needle without instruction (all done on her own because I was in the other room on the phone!) ... and after I knotted the thread for her, she sewed it up, added beans, and finished the project on her own. Pretty crafty for a 5yo! Here is a photo of our beanbag family... and this is AFTER surviving a wild night of partying. 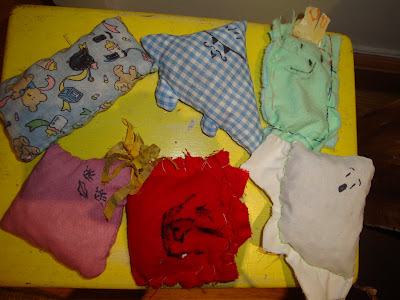 Honor and Brian decided to use construction paper and make decorations for our entry wall. The wall isn't done yet, I'll post pics later, but they did a great job on their artwork. 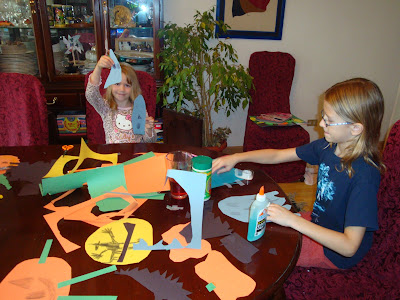 Looks like all the kids will have an awesome day!! I envy the fact that you and your children can make things like that. I'm totally not crafty. Very cool bean bags. :)