Very cool that Brian's third grade class had a series of lessons on Native Americans. Of course, he is attending an school with American curriculum - but it is has such an international feel, that except for the English, it can be easy to forget. He has studied other cultures in a variety of multi-cultural lessons, and he has Egyptian culture, and Arabic as a foreign language... easy to forget that he might not be missing out on subjects wholly American after all.

I understand that land use, water, food needs, shelter, trade, religion, etc. are common angles used to view and study any culture - past, present, future - and so the study of Native American history would be useful no matter where you are, but it was still a pleasant surprise to me. Brian was very interested. When he brought home paperwork about a project, he told me, "Mom, I am glad that you do not work any more - you are home in the afternoons now, and I really want you to work with me on this." You better believe that I said I really wanted to work with him too!

Thank goodness for the internet. I sat Brian down with a browser, and sent him off researching items on his selected area of interest - the Great Plains. I only gave him ideas of what he might look for - word and images, but left him to go after what interested him. He jumped right in. I also left him to do his paragraph on his own. It ended up that he and his Dad finished up the writing. Brian and I spent several days designing his 3-D display. He needed to show housing and life in general for Native Americans in past times.

Brian was fascinated by the buffalo, and wanted a buffalo in his scene. The only plastic one we had was a tiny thing. Brian was not interested. The only models we were likely to find around here are the water buffalo - NOT the same thing, and if 'Made in China', even the coloring would likely be way off. I'll never get over the GIANT blue rabbit that Honor once got in a set of plastic farm animals. That mutant creature towered over the biggest oxen in the set!

Brian started his creation with the teepee. We worked together to tie sticks, measure and cut fabric, and paint. Brian researched designs, and we worked together to make it happen. He painted a wolf face to add to the teepee on his own - free hand! I was very proud of him. Brian also painted the background on the scene/poster board and cut out images to fill in a village setting. He made a cochina doll, a hunter, at school.

For a buffalo, I decided to sew one. Fortunately, I hoard fabric scraps for just this sort of an emergency. Brian has never done any sewing, so I did the majority of work on it, but I explained to him how to plan the shape (3d, not 2d - it takes more than sewing two buffalo sillouettes together), and how to sew the pieces inside out, then turn it right side out - ugly seams on the inside. He stuffed the model - which, is not as easy as it seems... for a little toy with skinny legs, it took patience to do it right. He wanted it to stand up, and that took firm stuffing. Then, after a little lesson, he neatly sewed up the closing seam.

Then... the night before he had to turn his project in... Brian got sick! Poor kiddo. He worked so hard. I emailed the teacher a photo of Brian and his finished project... not the same as being there to show off his project and see his classmates' work, but it helped. We turned his work in yesterday, when we went to pick up his homework, and he got to see the other kids' projects while we were there.

Here is a picture of his scene: 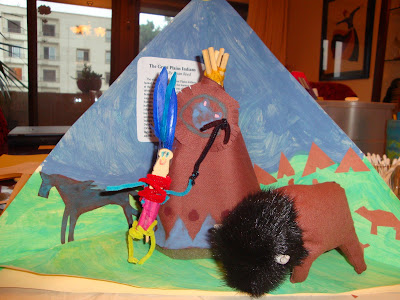 .... a close-up of that awesome wolf painting! 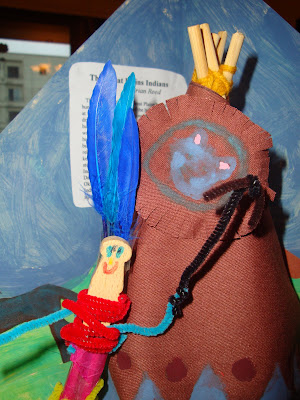 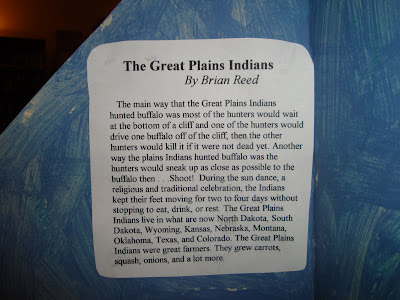 and one with the researcher and his final project. I am very proud of the effort, time and work that he put into this! 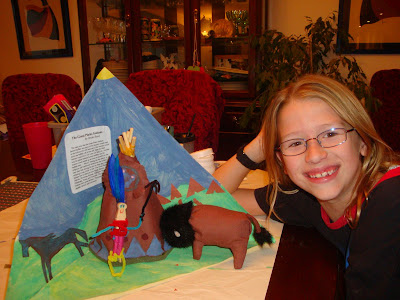 cool!! I think I actually miss helping on projects like that. mine are too old for help now.

He did a fantastic job and all the detail shows the thought, time and skill that went into his project.

You are making me look bad. You're stitching 3D buffalo and we haven't even gotten around to finding store-bought Halloween costumes over here.

Any chance you could make a few buffalo costumes and send 'em my way?