I was talking with some friends the other day and they mentioned keeping their kids away from the tv remotes and other bits of technology. Kids who are 4-5yo. I guess I can understand this. TV and computer use should be monitored, and we do so. But, isn't it a pain to have to mess with the TV so much? We have always let the kids work the remotes so they can stop, start, pause, and otherwise adjust their own shows. (We do not have cable or satellite - only DVD's and tapes). Brian was able to turn on the TV, change channels and volume, and pop tapes in the VHS when he was 15 months old. He loved Baby Einstein (who knew that toys and simple hand puppets waving around in time to classical music could be so captivating?!) and the Bob the Builder series... I know I remember his age at the time correctly because I remember what house we lived in when he learned, we were only there 5 months. I, obviously, believe my offspring are the smartest children in the world, possibly of all time (of course!), but I did not think much of this remote using. Everybody uses a remote. Like light switches, and toilet flushers... they're a fact of life. Right?

I still don't usually think much of it, as this technology change has happened gradually over my lifetime - it just 'is' - but I didn't grow up with remotes. We had one TV, it had knobs and buttons, and it was dad's. I had to go outside and play.

At school, I didn't have a formal computer class until high school - although we did have various lessons or other rare specials on computer prior to that. Yet, even pre-K and Kindergarten have computer time at our kids' school. Our 3rd grader has keyboarding several times a week - yea, learning to type as well as other ways of utilizing the computer. My 'tech' at home, was a radio. I was not allowed to use the phone until I was...10?, 11? Definitely no computer. I was using power tools and driving things (probably most illegally, definitely the car was - not sure about the boat, riding mower, golf cart, etc.) before I was turned loose with the TV and phone. Yet, our kids have used the TV/VCR/DVD remotes since they were big enough to wrap their chubby little, slobber coated fingers around them. They've used the computer since 2-3 years old. They both envy our iPods, and Brian has been asking for his own laptop - nevermind that we've now got TWO desktops set up for them - he wants a modern laptop like his dad's. Honor is even after my PDA/smartphone! Yesterday she asked to borrow it and sat in her room with it for a good 30 minutes, teaching herself to use the camera, play solitaire, and doodle on the scribble pad. She even sent her Daddy a SMS, although I had to help her figure out that part, the set up and sending - she typed her own little message. "I love you daddy". I don't think my parents would have let me be in the same room with this sort of technology when I was a kindergartner! 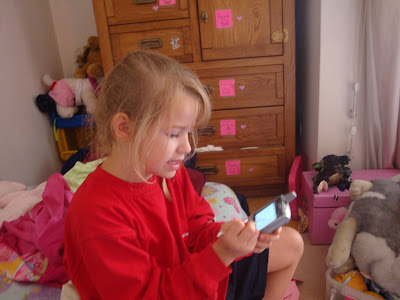 NOT a fan of techonology -Ramses was waiting, rather dejectedly, for Honor to get tired of playing with the phone so she would play and snuggle with him, poor kitty. 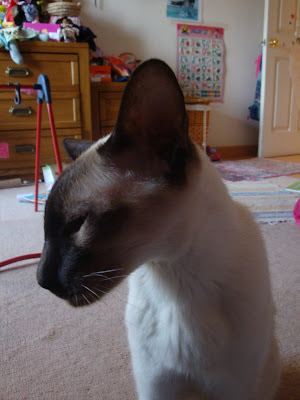 Gotta wonder what will be 'normal' technology when they get older. What will our 'adaption limitations' be? You know, the ones our grandkids will be making fun of us with?
Posted by Connie at 10:53 AM

It scares me what my nephew can do on a computer. Technology improves almost daily and this is what we get in return - children who can create symphonies on their desktop and teens create robots that create symphonies. Meanwhile i still can't program my VCR. LOL

I agree, they are the smartest kids in the world... Well, maybe some of their cousins could give them some competition in that department.

Me? Biased? No, just an observant independant bystander.

I'm lucky that I know how to answer my cell phone. Forget about retrieving messages or scrolling through all the functions.