We have the most spoiled fish in the world. He's a Betta Splendens, aka a Siamese fighting fish, and looks somewhat like this guy in color: 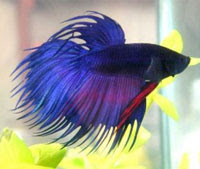 This is not our fish. I got the image here. Our fish is a bit scruffier, and has a lot more attitude. His fins are a prettier turquois shade as well. He'd never just sit peacefully at the top posing for a pretty photo. No, he turns toward the camera - either out of curiousity, aggression, or search for food. I give up. Thank goodness for the internet.

Anyway, the kids had been asking about fish, lizards, and other pets. We have 2 cats, and I thought that was enough, but they kept asking. I decided to get them a fish in a bowl at the beginning of school last year. I thought about getting a little aquarium, but several sites actually recommended against a tank with a filter. So, he has a bowl. After voting on a variety of names, like Rainbow, Kitten, Gladiator, etc. he was dubbed, "Dolphin". Dolphin has lived happily on our dining room table for over a year now. May seem strange to keep an animal on the table, but it keeps him, and us, entertained.

The kids talk to the fish and like to watch him. Bettas are interesting and interactive fish. The cats don't bug him beyond drinking out of his bowl. The kids are a bit worried about what we will do when we leave. They want to take Dolphin with us, but I do not think it is possible to safely transport him. We will have to find someone willing to take in a very spoiled fish.

How do we manage to keep a fish here, and how did we spoil him? Well, we use bottled water, with a few bits of 'chlor' crystal... no idea what it is exactly, but it works to keep his bowl nice. We were sold some pellets for food, but they are more for tropical fish. The diet for a betta is recommended as follows: "Diet: Carnivorous - Prefers live foods such as bloodworms, brine shrimp, krill and tubifex worms. Will also eat frozen foods. Some high protein flake or pellet food may be used as well depending on the fish." um...? Where do I get these things?? Not here! I also worried about feeding raw foods, or thawing bits of frozen, etc. So I just started him on cooked meat scraps, with the odd vegetable added once a week for helping his digestion. If it works for us and the cats, why not a carnivorous fish?

I wanted to start him slowly on the new foods as I didn't want to hurt him, but he quickly developed an attitude. After giving him meat, the next feeding was to be pellets. I put the pellets in. He just looked at them... then swam to the side of the bowl and looked at me with his brow furrowed. I don't even bother with those pellets anymore - he won't eat them.

We brought back some betta food pellets from the US when we were on leave, and he likes those... ok... but he prefers the good stuff. He watches when we eat and definitely makes it known that he wants his share. I usually cut his food into tiny crumb-sized bites, but if the food is soft, like broccoli, or a very tender meat, I give him a bigger chunk. He likes to stalk, attack, carry his victim around the bowl a few times, and finally rend his prey to shreds in a stealthy and dramatic fashion... you know... how wild bettas usually take down cows in their natural habitat (or mosquito larva - whatever.)

Yea... and Dolphin really loves that beef brisket I made on Saturday. He ate what I gave him, and his broccoli, then went begging on Brad's side of the bowl. Spoiled rotten!
Posted by Connie at 10:46 AM

Your fish eats better than i do! LOL What did you do with teh fish during home leave? Do they have fish kennels? LOL

A friend watched him and our cats while we were gone - we traded house sitting chores. Yea, he does eat well - it's a wonder the cats don't get jealous.

A fish that begs? Now I've heard it all. I can only hope my dog doesn't hear about these fancy fish meals...

This is the first I heard about a fish with a diet attitude or feeding a fish real human food. Doesn't his water get yukky?

He sounds like my dog. What a personality. Does he bite fingers?

The 'real' food makes his water much less messy than those nasty pellets - probably because he doesn't let any of the good stuff go to waste! If we were in a place where I could get real betta food, I would get it, but I think people food is nutritionally better for him than the more vegetarian 'tropical fish' food.

I don't change his water frequently because it scares him. I try to balance between clean-ish water, and a less frequently traumatized fish. So far, so good.

He doesn't nip fingers, but then again, I don't let the kids play in his water.. he might nibble if given the chance.