School has been out since last week for the 'Eid holiday. We've been enjoying the time at home - relaxing and just hanging out together. Haven't really gone anywhere, haven't wanted to. We've visited neighbors a bit, but for the most part, we've been lazy and anti-social. I think we've all enjoyed this bit of quiet family time. Brian and Honor have been playing so good together, they've had a few tiffs, but for the most part, they've been having a blast.

Mornings have been filled with playstation wildness, or cartoon marathons. This morning we watched a couple hours of Teen Titans cartoons. I have to admit, I am glad it wasn't Dora! She is great, but only in small doses. And while I like Sponge Bob, Honor had been stuck on the little yellow guy for a bit too long and I am starting to memorize all the episodes. Teen Titans is a great show. Basic good guys vs. bad guys, but with kids, so it isn't too dark. Good animation too. I also like watching the kids watch. They talk about the characters, joke around, etc. It's fun for me to see how they interact... not to mention how cute it is when they gather pillows, blankets and toys to 'nest' in front of the TV together... it's cute, but it is also very cooperative and mature.

Eventually the TV gets a break and they go play. Hide and seek. Pretend games (Brian is not much into make-believe, but he is very patient with his little sister). Legos... lots and lots of legos-mom-can-I-please-leave-it-out-I'm-still-working-on-it legos all over the place. Honor is just now getting good at building random things with the small blocks (vs the Mega bloc and other bigger sized blocks). Brian is enjoying the kits where he has to follow a diagram to create a specific model. Brad enjoys playing too. I'm only handy to have around when the blocks stick together because I have fingernails. 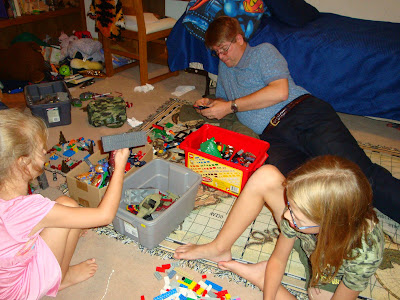 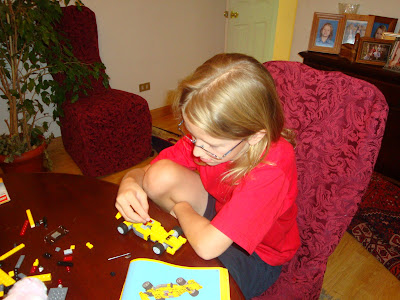 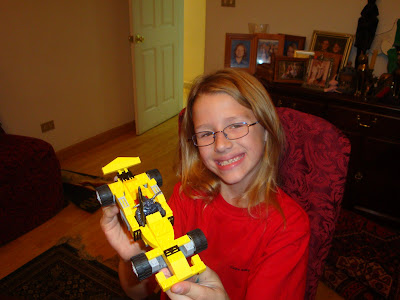 The kids have been playing a bunch of PC games too, which I prefer over PS2. More thought and strategy is involved with the PC games. Honor enjoys phonics and learn to read games. She also likes music games, and whatever her brother is into. Brian likes his webkins, and although he has pretty much mastered "Age of Mythology", and the "Titans" expansion pack, he still enjoys it. He's also been doing pretty good with that addictive "Fantastic Contraption" game. I think though, that his new favorite game is "Rise of Nations". Why do we let them play so much? Never thought we would be so free with computer time, but it is hard to complain about games that get 7 (and 5) year olds talking about Egyptian, Norse and Greek Mythology (and checking out library books on these subjects), and lately, the different 'age's of civilization. Medieval, classical, enlightenment, industrial, etc. as well as the strengths and weaknesses of the technology of certain nations during these periods. 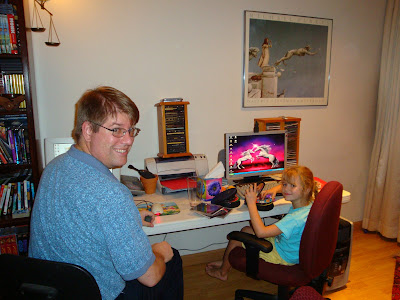 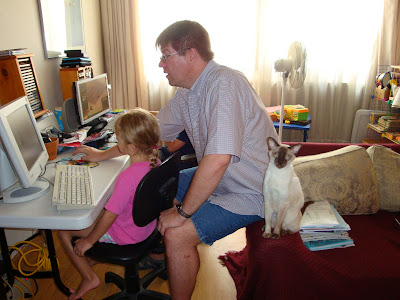 Did you notice the nifty double computer station? This is part of the 'construction' I've been busy with for awhile now. The 'new' desk top computer is actually scavenged bits and parts of old computers. We're still working out the kinks, but it works well enough for the kids. Recycle, reuse! I am gradually trying to get our house in an organized and friendly set-up. I have re-done some things, and am still working on getting to other things.. but.. I am slowly getting there.

Here's the play area behind the couch in the living room. Both kids use it, but it is mostly Honor's space. She likes to 'pretend' and this is a great little play room that is not separate from where the rest of us hang out. 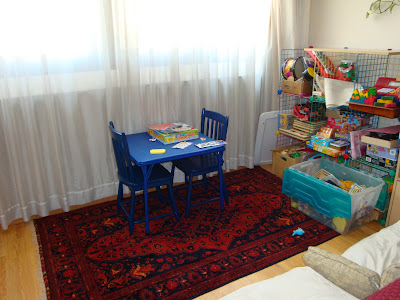 I managed to get the treadmill out of its dark, sad, little corner in the office, and out into the living room. Not very decorative, but I think it looks much happier now. The red carpet stored on it is temporary - I'm still working on getting that into the office. 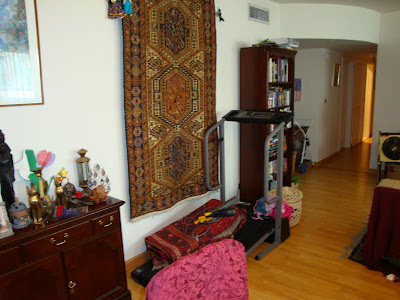 The office. Well. This is the 'deconstruction' I am working on. If you squint hard and block out all that 'in-progress' junk, picture a sewing machine set up in the nook back there. Cool huh? 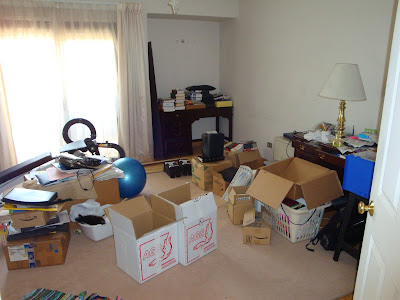 Looky! New bookshelves! We got two of them! It sure helps to have storage places when you want to organize something. 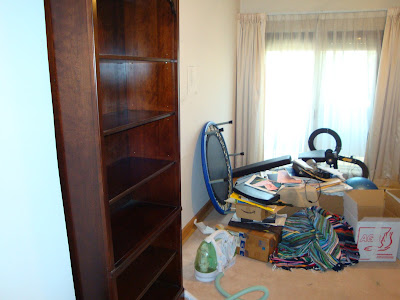 I've progressed a bit since these photos were taken. I see light at the end. The office has been an unorganized waste-of-space - even when completely 'straightened up' (as far as it went in its former incarnation) since we moved in. It was not an inviting place to work or play. I hope to make it a part of the family very soon now. Weight bench, trampoline. Floor space for taekwondo practice and other play. I want to move the kids' easel and art stuff in here. Set up my sewing machine(!), etc. We'll see how it goes...

Glad to see i wasn't the only one stuck in Cairo for the Eid holidays. But it sure felt like it. LOL And if you ever need lots of kid friendly dvds i'm your girl. It helps that secretly i'm 12 (no matter what my mother, husband, or driver's licence may say). I love cartoons - tv shows and movies - so i always get them on dvd! LOL

Great work on the organization! That is really cool.

Thanks for showing us your home. I love all the pics with Brad pl;aying with the kids too. Brian looks so grown up in his glasses.
Your last couple of pictures reminds me of how our house looks right now--- I am reorganizing and getting out winter clothes.

I've been organizing too - must be the change of seasons.

I read your comments on Christine's blog and wonder what brought your family to Egypt. Is your husband in the foreign service or military? How long will you be living there?

Hi Tina, we're with the Embassy and have another year here. We will really miss Cairo when we move - we have really loved it here.

Christine, we don't really have a huge change from summer to winter, but I need to dig out their warmer stuff and see what fits. It was 70-ish this morning and Honor was actually shivering!

Organization is definitely in the air - mama seoul and I are Fly Lady fans - check her out!

Thanks for the answer. Where are all the places you've lived with the Embassy?

We've been movers all along, pre-State Dept.,Military, etc. :-) England and Pakistan, many places through the US. One of these days we will figure out where home is/will be. We've got family in CA/OR and some in OK. Kids want to move to FL (for Disney and the beaches!). They've lived here in Egypt most of their lives. Moving next year (where? prob US for awhile, then?) will be a big adventure.

Wow. That doesn't seem like a relaxing holiday at all. It seems really busy. But doesn't organizing feel good and therapeutic? At least I think so!