This is our second time attending the Halloween carnival at the kids' school, and yet again, it did not disappoint. It is a huge event. The tickets actually have to be limited to elementary students only - can't bring in outsiders (although we would have loved to invite some friends who do not attend :-( sorry!) The middle and high school kids host the booths and other attractions as fund raisers, and they do a great job!

After trick-or-treating at home with our neighbors, we hopped into the car and drove to school. We arrived about 10 minutes before it opened - and yet managed to find a very close parking spot. Either someone left, or others thought it too small - I got our truck in just fine though. We still had to wait in the HUGE line waiting to get in.

Immediately inside the door, high school students, dressed in medieval garb, greeted our arrival... with great fanfare I might add. They greeted each child and made a fuss over each according to their costume. Brian they greeted as a fellow warrior, and bade him join them at court. Honor, of course, was greeted as a fairy princess upon a noble unicorn steed ought to be greeted. They asked for her magical blessings, so she politely waved her wand and granted wishes.

Here are my guys - ready to head inside and have some fun! First stop is the trick-or-treat lane. Not that we need any more candy - I know my kids.. Honor will eat some, but mostly, they will hoard it until I make them throw it away. When we arrived home Friday evening, Honor and I took most of our extra candy downstairs to the guards. One of the men who we've known since we've been here, and has become a good friend, walked us around the block so Honor could hand out candy to the security forces all around the perimeter. Reverse trick-or-treating :-) 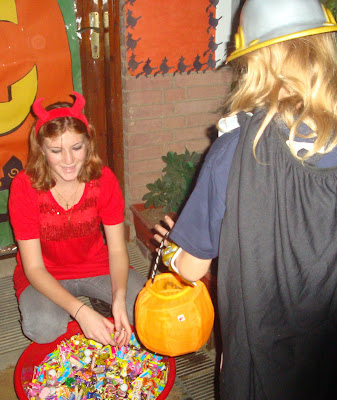 Honor - skipping along after Brian and her daddy, trying to touch the ghosts in the trees. 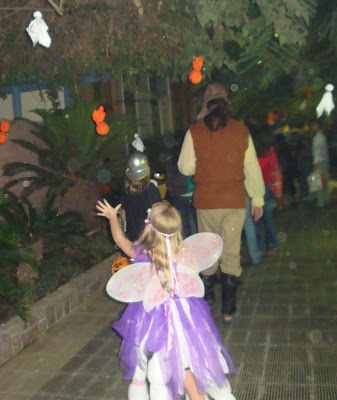 Me and my sweeties. 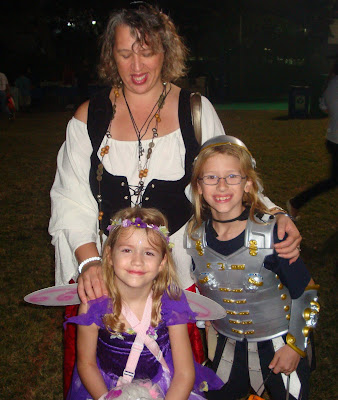 Honor was fascinated by this queen. We didn't get a chance to watch any of the shows this group performed, but just visiting was plenty of fun for our little princess. 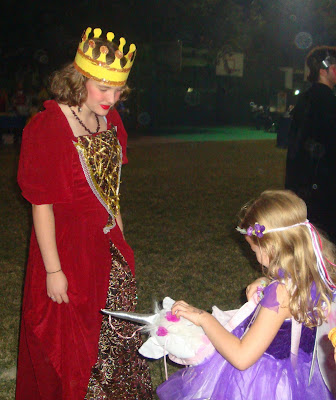 The kids loved running through the dark maze, but were NOT ready for the haunted house in the gym. Both gave it a go. Honor made it past the screaming fiend chained to a fence-door, but couldn't make it through the steamy scary locker room to see the zombies in the shower... the haunted house is REALLY good. Brian continued on, but Brad said he was lucky to have both arms attached at the end. We told them they were very brave for just wanting to go in (their idea!) - we saw other kids their size who didn't even want to try. Anyway, Brian escapes the maze... his sister manages to follow a few seconds later. 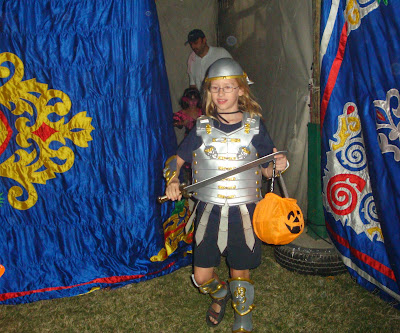 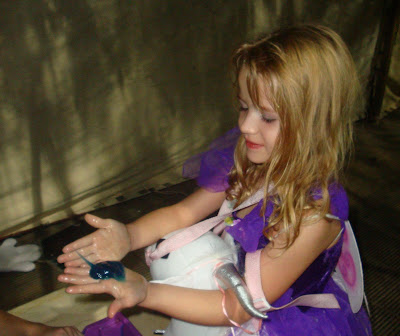 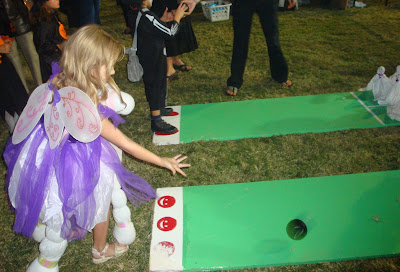 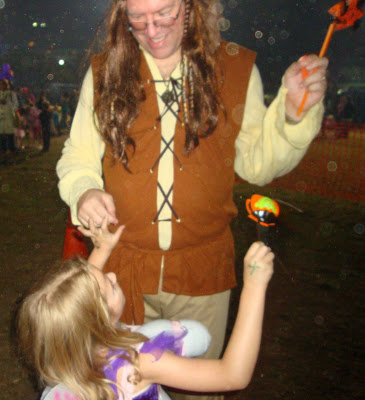 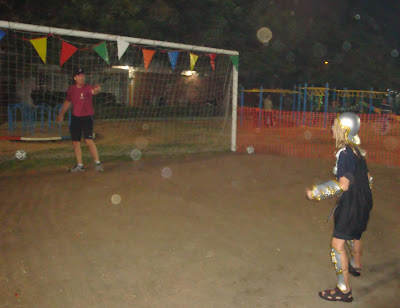 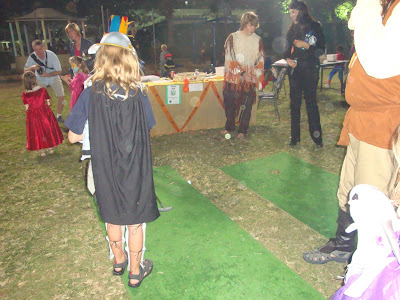 Sibling tic-tac-toe. Honor managed to hold her own against her big brother and they tied. 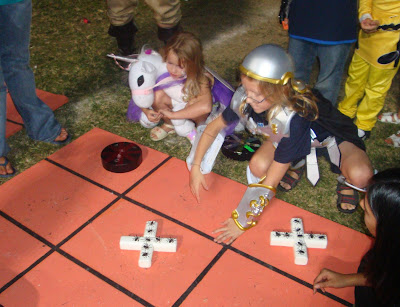 Look at that professional stance... gotta get this girl a dart board. 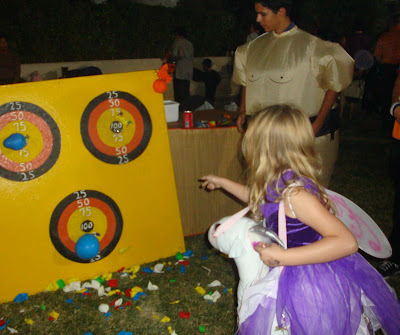 I think they had a lot of fun - I know we did, just watching them play. 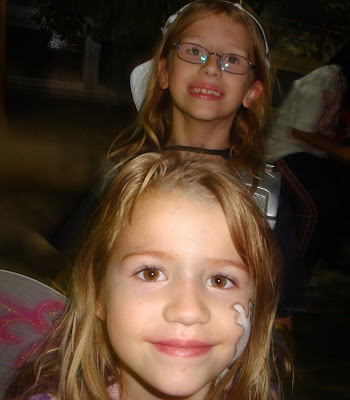 There was a lot of wildness going on outside the school as we left around 9pm. Older kids - of all nationalities, running through the streets. Eggs and tomatoes were flying everywhere. Security forces were everywhere, lining the streets and corners, as well. We were parked in the middle of it all, and had to drive up the road, turn around, and come back through it to get home - we passed by teens with hands full of eggs - but nobody was out to 'get' us or anyone, and we didn't have a single 'splat' on our truck. It was just wild Halloween goofiness. I don't actually approve of throwing eggs and tomatoes - my dad would have been ticked off at us for wasting food like that! People need food. Wasting it isn't right. Water balloons would have been a better choice of ammo...
Posted by Connie at 10:50 AM

I can't believe how many halloween parties there were for kids!! I don't remember having anything like that when i was a kid. Is it the overseas thing? Or was i just deprived as a child? LOL

I believe it is an overseas thing. :-D

Modern Halloween fun may be seen as an American thing, but it is something that everyone can really enjoy.

I went to Halloween parties when I was a kid too. My elementary school held big carnivals... fund raiser for the school. And my father's Catholic church would sometimes put on a huge to-do... again, as a fund raiser. I just remember the fun, and I am glad to be able to share with my kids.

Wow so much to do at that carnival and it looked like so much fun! Your daughter's name (Honor)... is that a family name? I did some genealogy research some years back and discovered it was a common name in my family in the late 1800's and early 1900's.

Celticspirit - Honor is a random name that we liked. I think my husband may have found another, way back when, in our family, but I am not sure. I knew of the name 'Anora' (sp?) the Spanish version, but we just found the name in a book. We also liked Morgan and Trinity. Well, I liked Trinity. And while we both still like Morgan, we're glad we went with Honor. It fits, and she's had a lot of other girls in her age group named Morgan. She's also had a lot of unusual virtue named peers. Had one teacher comment, "We have Honor, we have Justice, all we need is Truth, and they can form a patriotic girl rock band".