Thursday was a very busy day. The school has been celebrating Egyptian culture all during this week. They've had crafts, storytelling, special foods, etc., all culminating in a huge to-do on Thursday.

One thing they've enjoyed for most of the week, was the oven set up making baladi bread. The local flat bread is delicious when eaten right out of the oven... at one Egyptian pound per piece(!) they were raking in the bucks, but the kids loved the fresh bread. Another highlight was an art show and sale in the meeting room. Pottery, ceramics, paintings, carpets, etc. Lovely stuff .. mostly over-priced(!), but nice. We got a few small items. I finally replaced my broken tea pot with a nice pottery piece - looks more like a coffee carafe, but it will do. It is casual, but has an interesting bird design. Egyptian, without being 'touristy'. I'll have to share a picture when I remember to take one.

I joined Honor's class at the circus. I wasn't sure what Brian's class schedule was, but I knew I'd find him at the festival eventually. All the kids wore their galebeyas for this special festival day. Honor is ready to watch the show. 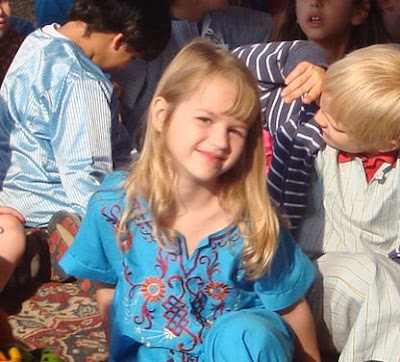 The circus was small. This guy juggled, did some ladder tricks (using it as stilts) and did this plate spinning trick. There were also a couple of guys on big stilts. Simple, but the little kids liked it. 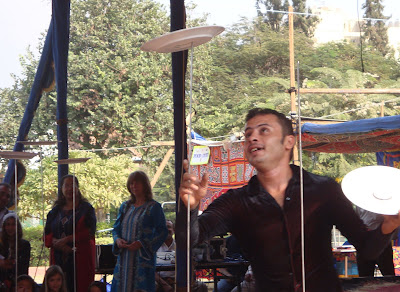 There's Brian! Yet again this year, he forgot to wear his galebeya... he brought it... he's not opposed to wearing one, but he is always is such a hurry to run out to recess! 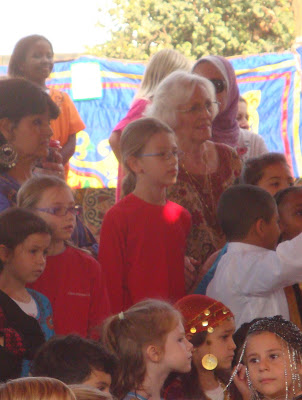 After the circus, Honor's class had a short time free for shopping. We had to get a nice beaded headpiece to go with her pretty dress. 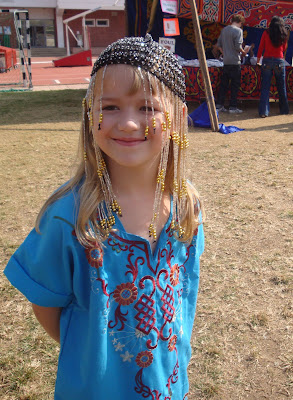 Whoa! and she thought daddy was tall! 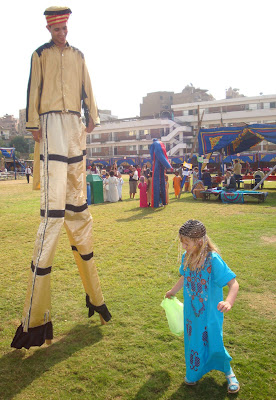 Yay! More shopping!! We really didn't buy much this year. Prices were too high - or maybe I've just been here long enough to realize they were too high, and and they were last year too?? I do not mind paying a 'foreigner' price most of the time. I'll haggle some, but I'll settle for a fair price for the item I want, even if it is not necessarily a 'local's' price. These prices were way up there. 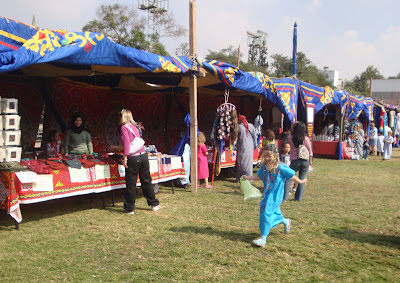 The marching band! The music definitely lent a festive note to the event. 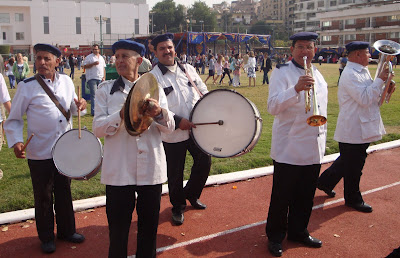 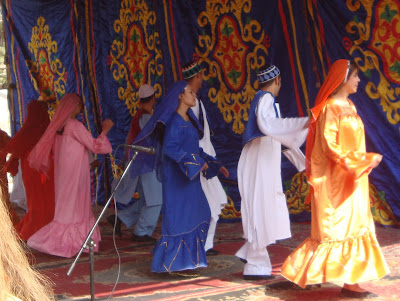 After lunch, I came back to the school in time to watch the tanoura dancing with Brian. The entertainment version of the whirling dervish practice. These guys were very good, and they also encouraged the kids to come up and try... which mostly consisted of kids spinning around and the dancers catching them before they spun off dizzily into the crowd. They had the smaller skirts available, because one of their young students had also been part of their dance. I think they said he was 9yo. Spinning in circles is easy... to keep doing so for a long time without losing your balance or passing out, takes a lot of work and training! 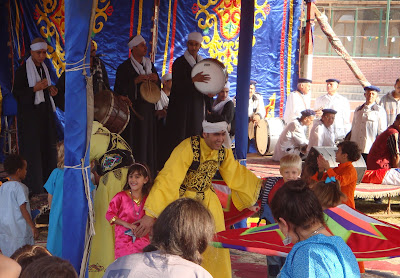 The elementary school principle gets some some tips on proper spinning technique. 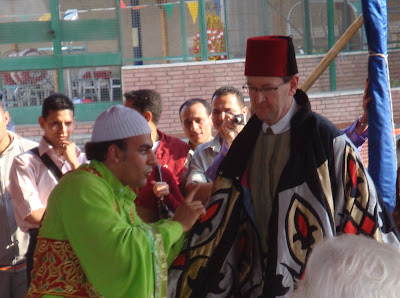 The finale of the show - I love the colorful costumes. 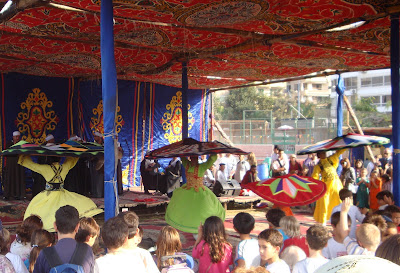 Brian has to go to his after-school activity, but Honor and I stay at the festival. She heads back to the free sample booth first! 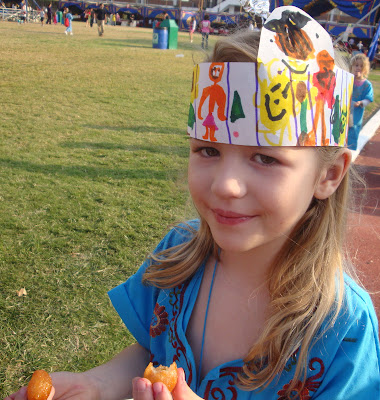 Then we did a little plaster of paris arts and crafts. Honor worked hard on her painting. And don't you like the crown and evil eye ward she's wearing? They made these crafts in class this week. Honor also picked out a statue for Brian to paint later at home. 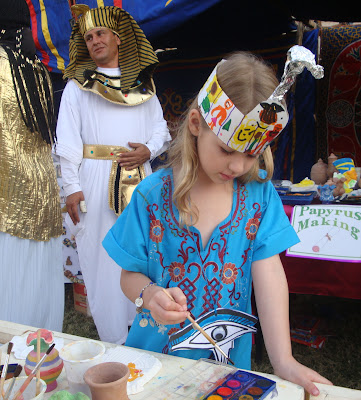 We left the festival and joined Brian at his after-school activity. Today, he has an origami class and he demonstrated how to make a balloon out of paper. 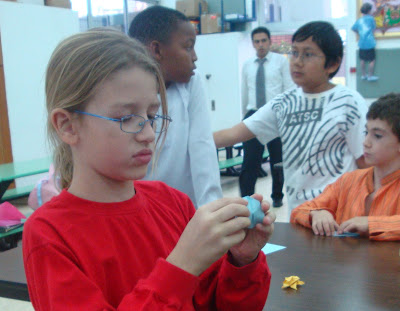 Honor and I went out to the playground to wait for Brian. 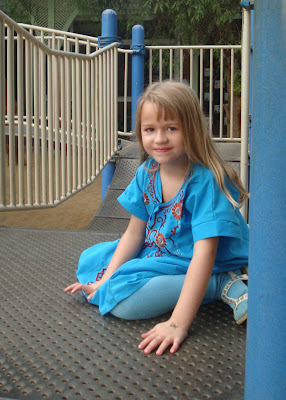 A long skirt does not keep her off the monkey bars! 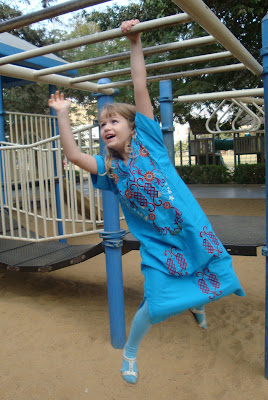 Finally, Brian comes out to join us. Big brothers are very handy for pushing the tire swing. 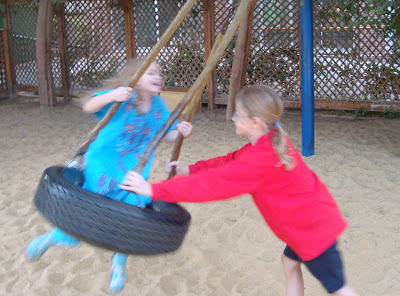 Even if he does make it go too fast! 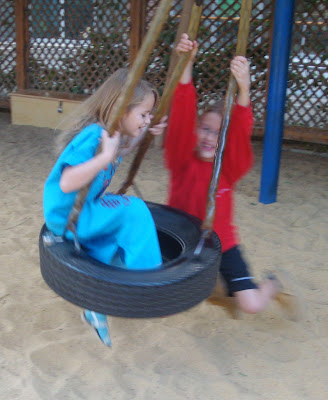 Speaking of too fast, I'd probably have more pictures of Brian if he stayed still longer! 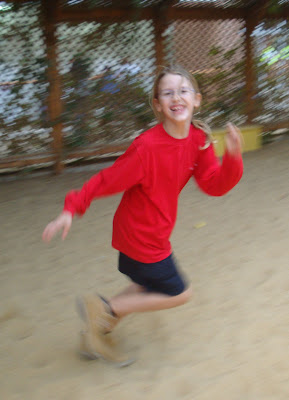 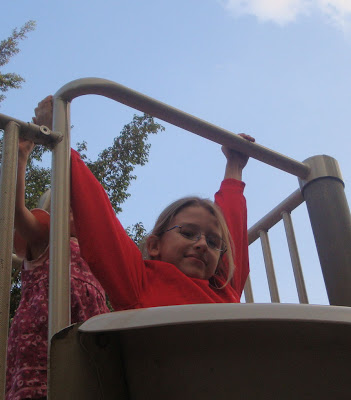 We had a great... but very tiring!... day, and thoroughly enjoyed the Egyptian culture experience the school helped provide.
Here is a short video of the tanoura dancers, so you can see the vivid colors of the skirts in motion, and hear the music:

Events like these are just one reason i love the schools overseas. It looks like everyone had a wonderful time - including you! :)

I did have a wonderful time. One thing that worked out well was the timing - I was able to hop back and forth between kids. Time to visit one, then the other, etc. :-)

Wow! That was really interesting! I am so sorry that it has taken me this long to link you on BATW. I thought I was caught up but found a slew of bloggers that weren't linked and panicked. You are one of them. Just wanted to let you know that you are all set now. Check in daily to see where in the world we are headed next!

woow thanks a lot for sharing all this, i envy, when i was a kid they never make such celebrations in my school.
Baladi bread is very healthy btw unlike the French and toast i believe.
the angels are sooooo beautiful , tell them they are very beautiful :)
btw dervish's tanoura show is not Egyptian it's from morocco not Egypt, hard to imagine ancient Egyptians do the "altanoura dance", it's sad how they wiping the history of my ancestors :(

I was asked to bring in a recipe once, for US culture. My first thought was burritos! Had to correct myself though - they are Mexican, but still, a HUGE part of US cuisine. We've adopted it.

Tanoura is not wiping away Egyptian culture - just proof of how cosmopolitan, open and alive Egyptian culture is. Things that live - change and grow, and that it better than the alternative!

i don't know really but if cosmopolitan life style demand me to adopt cultures like Altanoura dance and Wahabie Bedouin culture from saudi arabia which for an instance deal with women as they are a piece of property, then iam not cosmopolitan at all.

but for sure I'll pro cosmopolitan life style if we will import positive values like cleaning our streets like people do in Europe.

Change is growth, growth is good - but it is rarely quick or easy - we can only hope the good things stick, and the bad things go away.

i beg to differ ma'am, not every change is a growth.. at least here in Egypt and from my experience, good things goes and bad things stay, thanks anyway for the little discussion, good luck for you and for the angels :)

Looks like a good time was had by all. :-) Honor's galabeyya is very nice. I love wearing mine- comfy!

WHat a great experience. I love that your blog is always so positive about expat life. ANd I love your daughter's galebeya. SO pretty!