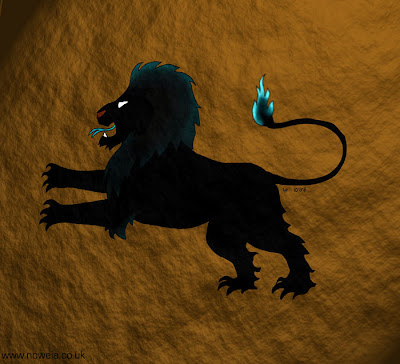 You never know where your kids will take you. Or when.

At 2am last night, a little voice in the hall calls, "Mommy! Come out here! Come out here!" I go out there, and I find poor little Honor, trembling in the patch of light in the hallway... too scared to stay in her room, too scared to push open my half-closed door to come into ours. Apparently, there had been a lion in her room, about to eat her up!

I tried to coax her back to bed, but she was very scared, and I understood. When I was little, I had very vivid, very scary dreams. Night terrors. I remember waking up screaming. I remember my dad having to sleep in the car in order to get any rest! I don't think my mom knew what to do with me. She'd make me stay in bed and tell me it was only my imagination. No. It was NOT my imagination. My imagination was MINE - and I wouldn't do those awful things to myself. It took awhile for me to understand the difference. In the meantime, that shadow I know I saw, the one that had stretched out from the corner of the curtain... snout elongating, teeth growing... until it flowed across the wall, sliding shadow to shadow until it was almost at my bed. Well, it was in the house somewhere...and just because my screaming scared it away from me temporarily, didn't mean that it had actually left(!), but my mom would not ever let me go turn on the lights, check the house, and make sure.

My mom also had this habit of telling me that if I was scared of something in a dream, I should imagine myself standing in a field of flowers so I could be safe. Even as a preschooler, I remember thinking my mom was seriously out of touch.. I mean really, if I could get to the flower field, so could the monster - obviously! The only difference would be, instead of my being horribly killed by some nightmare creature in a dark alley somewhere, it would simply catch me in broad daylight, in the middle of a flower field, no shelter, no cover, no help - and I know that seeing my blood splattered on daisies and sunflowers was no more comforting to me, than NOT seeing it whilst being mutilated in a dark dreamscape! At least her advice gave me the idea that I should be aware of when I am dreaming, and the power to know that I could control any aspect of my dreams, if I choose. I learned. Now, I can and always do so. I can even enjoy nightmares, in a thrilling, scary movie kind of way, because I know that if I get too scared, I can just wake myself up. The only real nightmares I have anymore, and they usually only happen when I am extremely tired or ill, are ones in which I think I succeed in waking myself up, but do not, repeatedly... it happens rarely. Having no awareness of being in a dreamstate, and not being in control - shudder!

Anyway, I am trying to teach Honor to control her dreams. She seems inclined toward very vivid dreams too, and I want to help her find her 'remote control' and give her some coping tools. Here are a few things that help:

1. I immediately tell her "You're awake. You're safe." When she calms down, I remind her that she needs to tell herself that when she wakes herself up from a nightmare. She should say, "I'm awake, I'm safe, I won!" Something positive, to help her calm down.

2. I remind her that dreams can seem very real because our minds are very powerful. Our dreams may seem even more real when we are disturbed by an outside noise that wakes us up a little bit, but we are too tired to wake up all the way. We only wake up just a bit, and end up watching dream 'tv'.

3. I reinforce that, as scary as a dream may be, it is still HER dream. She can dream of having a gun that will kill any monster, she can have superpowers, she can be a powerful sorceress, she can turn into an even scarier monster and EAT the thing attacking her. I also reinforce the TV idea - that she can change the 'channels' to a new show, she can turn the dream off and wake up. One idea she especially liked was she could walk her dream self into our room, and hop into my dream, then my dream self would go help her beat up all the monsters.

4. I make sure she knows we are there when she needs us. I think the one thing that has always made the kids confident and comfortable in their own rooms, is that they know that are allowed to run to us, if need be, without getting in trouble for being up. They know it, and so while we do have some 'needy' days where they need to come out for extra hugs, etc., they really do not abuse our open door policy. They believe in it, so they don't need to test it constantly. They also know they can call us to them if need be. They know we don't like them to yell and wake the whole house, but if it is so important that they think they need to, then we want them to yell... it rarely happens.

5. I don't blow off her concerns. She saw a lion. So, while I did explain to her that there could not really be a lion - and all the reasons why - I did not tell her that she did not see one. Obviously, she did. Dream or not, that lion was scary to her. (...even though it was apparently small enough to fit in a 2'x2' corner of her closet .. still, it was a bad cat!) It was not her imagination, it existed in her dream... and dreams are much more real than play-pretend daydreams! I won't insult her intelligence by telling her that it wasn't there. I think dreams must engage your body's senses - physical, mental, emotional, and instinctive(!) - far more than you can do, on purpose, using only imagination. We might be able to rationalize, and she can understand, that there can be no flesh and blood lion in the house, but her instinctive "I survived the prehistoric cave-girl days" senses had been engaged. We had to appease those too.

So I asked if I should go through the house and check for lions. Yes. She wanted that, and she had to be with me. Just like when she was an infant and scared of the vacuum. Would baby Honor stay with daddy while I cleaned the carpets? No, she had to come to me to be safe... even if that meant crawling, crying the whole time, right towards the loud scary machine. So, last night, my brave little huntress put her tiny little hand in mine, still shaking, and we went through each room of the apartment... turning on lights and cautiously checking closets. Made sure the doors and windows were closed too. When the house was inspected and deemed lion-free, she finally stopped trembling. I lay with her a bit. We talked more about taking control of bad dreams, and I stayed with her until she slept then went back to my room.

This whole adventure probably only lasted 10 minutes. Several hours later, she woke up again wanting more hugs and kisses, but she went back to sleep again easily. I guess it is good that I had my experiences with nightmares as a child so I have some clue what might work to help my children. My mom was old school - "tough it out", "do as I say because I am the mom", "it's only your imagination", etc. Perhaps if she'd thought to go shadow wolf hunting with me more often, my dad wouldn't have had so many nights out sleeping in the car??

Poor thing! :( I suffer from nightmares occasionally and wake up screaming or running around trying to get away from whatever was in my dream. The funniest time; however, happened when Hubby was out of town and i was playing host to a friend of ours in Nairobi. I terrified him when i woke up screaming at the top of my lungs. Poor guy still jokes about it to this day!

I hope HOnor appreciates that you take her bad dreams seriously because i for one am jealous since Hubby no longer bothers - he just rolls over and mumbles about keeping the noise down. *sigh*

this is a very informative blog, vivid imagination like knowledge and smartness, can be a curse not a gift sometimes.
i hope angel honor grow up soon to figure out differences between dreams and reality
and this is cool she has this vivid imagination
vivid imagination girls are perfect :)