My day started off early in the morning, with lions. We made it past that, and got on with - first more sleep until the alarm rang - then, our normal get up and get ready for school routine.

Brian wasn't feeling 100%, but he seemed healthy enough, no fever, etc., and he wanted to go to school, so we let him go. It was only a half day today. I couldn't stay with Honor at school in the playground after drop-off like I usually do. Brian's class starts immediately, but the kindergartners play outside for about 10 minutes after the bell. Our car needs some work on the AC, so I had to get back home so the mechanic could pick it up.

I had a couple hours this morning of normal housework and stuff, but soon enough, it was time to go get the kids. I found Honor at her class, but Brian had said he would probably ride the bus. We stuck around to see if we could see him and ask if he had changed his mind but didn't find him. As we were leaving school grounds. We heard a strange noise from the construction site on campus. Looked up at the tall crane there and... oh my! 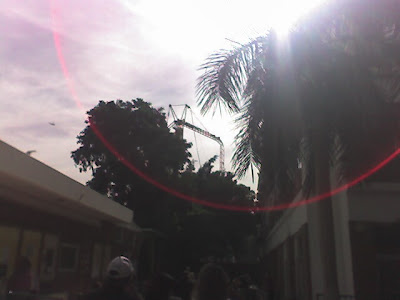 That rather sudden down turn on the right - that is not supposed to be there! The school sent out a rumor control email once things were investigated. No details of what caused this, but the crane had been moving a load, and folded. Very happy to hear that, fortunately, no-one was injured in the accident! The worksite is walled off from the school quite well, but there were kids out in the playing field nearby, and apparently rumor had them worried about injuries to the construction workers.

Anyway, before we left, I got a call from the mechanic saying that he couldn't get to our car today because of emergencies and lack of time. We may not have AC, but at least the car runs. Sounds like other customers were having a less than ideal commute today. We got home, and Brian soon joined us by way of the bus. He looked tired. Went upstairs and the poor kid told me that he had a stomach ache again (still?) and when I checked, found he had a fever of 102F. I fed them both some lunch, then had Brian nap. Poor kiddo slept for nearly 4 hours. Still not feeling so good at bed time, but at least he had dinner and was up reading for awhile.

While Brian napped, Honor played in her room. Her baby doll stroller broke... actually the fix I'd made to attempt an impossible (broken plastic piece) repair broke. I suggested that she put it in the charity box. She immediately got upset - "But if we give the stroller away, we have to give the whole set away! It's a set! They match!" (Similar to this set.) But, I said, you have so many toys, perhaps if you gave the old, broken set away, Santa might bring you a new one? She immediately switched gears, "Then I can have two! But give away the broken stroller." I pointed out that a new set won't match the old set, and we had no room for all that stuff. She got mad, then heartbroken, then started fussing, and then crying. Definitely a no win situation. I could tell she was tired, darn lions, and overly emotional because of it, so I gave her a chocolate. Crisis over, she could go back to her game. Not sure how Santa plans on handling this though. Honor really plays with her dolls a lot, and a stroller is important. We'll see.

At least dinner turned out well. And the kids were in sweet moods when their dad got home. Both are asleep now and I plan to follow soon. All things considered, it was actually a nice day. Extra time with the kids is always sweet. But it was a strange day. Hope there are no lions tonight. I also hope tomorrow plans on being a little more normal and routine!
Posted by Connie at 3:57 PM

Love reading about the kids! Tell honor and Brian we miss them!

What are the lions?

Will you be back in the US for Christmas or can you have things shipped to you?

Just read your other post and now understand about the lions. Poor kid.

That crane thing is freaky! How does a crane break in half?! *puzzled*

I think the crane actually looks confused. I saw it this morning and there is definitely a air of "um.. what do I do now??" emanating from it.

Tina, we'll likely be here for the holidays. We buy local, we ship things, etc. We are blessed with access to a good postal service through the APO system.

You're fortunate that you can use an APO. My daughter can't have anything shipped which makes it difficult for me as I used to love to buy things for the girls.

Connie, thinking of Brian. We prayed for him last night and hope he is not in a lot of pain.

A very odd day! I am happy it ended better than it started!